Optimizing the early-season environment and soil temperature for growing soybeans. 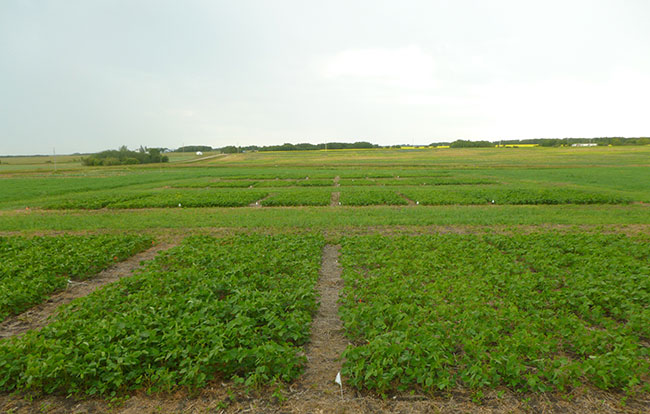 The soybean industry in Manitoba has grown rapidly over the last few years, partly due to the introduction of better-adapted varieties. However, even with improved genetics, soybean is still inherently a cold-sensitive crop and can be affected by cold temperatures in a number of ways. Finding strategies to address cold early season soil temperature conditions may be a tool to improve soybean production in short-season areas.

“With the expansion of soybean production, we were interested in determining whether there would be a way to create an early season environment that was better for establishment of soybean crops by adjusting residue management practices,” explains Ramona Mohr, research scientist with Agriculture and Agri-Food Canada at the Brandon Research and Development Centre in Manitoba.

“We know that seeding soybeans into cold soils can be problematic. The literature shows that if soybean seeds absorb cold water (less than 10 C) during the first 24 hours after planting, it can affect cell division and as a result impact germination and emergence. In addition, growing soybeans in short season areas adds the risk of potential spring or fall frosts that can impact the crop.”

Researchers initiated field studies with co-operators at four sites in Manitoba including Brandon, Carberry, Portage la Prairie and Roblin in 2014. The goal of the project was to determine if different preceding residue management practices would have an impact on soil temperature and moisture at planting, crop emergence, and soybean performance through the growing season to final soybean yield and quality. The study included canola, wheat and oat as preceding crops to soybean, as well as a control treatment of tillage. The canola plots included standing stubble with the chopped residue returned to the field. The wheat and oat plots had two different treatments, either removal of the straw and only standing stubble left, or chopping the straw and returning it to the plots along with the standing stubble.

“Our study results showed that the preceding residue management often did impact soil temperature and moisture at the time of planting,” Mohr says. “The tillage control plots and the cereal plots with straw removed and only stubble left standing tended to result in a warmer and/or drier seedbed at planting in some sites in some years. Where there were differences, tillage increased soil temperature by one to five degrees [Celsius], while removing the straw from the cereal stubble plots increased soil temperature by one to three degrees, compared to no-till treatments where straw had been chopped and returned.”

However, when researchers looked at the impact of preceding residue on soybean emergence and final yield and quality, there were few differences in the trials. Based on visual assessments of the crop, tillage and/or straw removal occasionally reduced the days to emergence by one or two days.

“As well, when we compared the soybean yield at the end of the growing season, we rarely found any differences in the effects of residue management. In two of 12 site years there were some differences, however it wasn’t clear that the differences were associated with soil temperature or moisture. It may be that the temperature differences early on weren’t enough to affect the crop, or the soybean crop was able to compensate for any small differences. Overall, residue management had limited effects on yield and various quality factors measured in the study, including seed weight, test weight, per cent protein and per cent oil of soybean.” 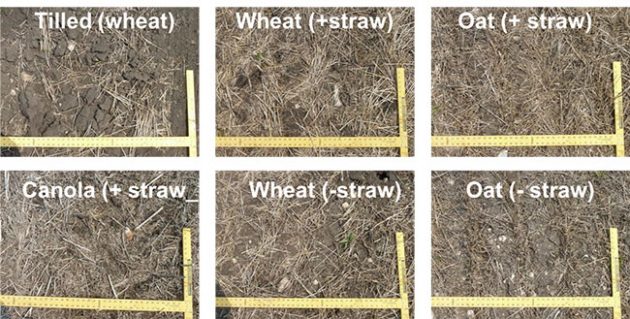 Comparison of different preceding residue management practices and their impact on soybean production. Photo courtesy of Agriculture and Agri-Food Canada.

One important factor to note is that for this study researchers followed the recommended management practices for growing soybean in Manitoba, including seeding soybean when average soil temperature is at least 10 C, with 18 C to 22 C being ideal. In the study, soil temperatures at planting were greater than or equal to 15 C in all treatments, and soybeans were planted during or near the recommended planting window for Manitoba. Therefore, Mohr cautions that although they did not find any significant effects in their study based on current provincial recommendations, under more marginal growing conditions there may have been an effect of preceding residue management practices.

“We have initiated a follow-up study that is underway to try to determine if there may be more of an effect on soybeans under more marginal conditions compared to during the recommended timing,” she adds. “In this study, we are comparing different residue management, but only with wheat, and using two different seeding dates, early and late. The soybean seeding protocols include an early seeding date of May 10 and a second seeding date two weeks later. There are also a few additional residue management treatments, including tillage, stubble burning, short and tall stubble with either the straw chopped and returned to the stubble or the straw removed completely. We expect to get more detailed information in terms of the potential effect of the different residue management practices under more marginal conditions by the end of the study.”

For successfully growing soybeans in short-season areas, following recommended practices and using management strategies to reduce the risks of cold temperature is important. “Growers will need to take an integrated approach for managing risk of cold temperature damage, including selecting varieties adapted to
local growing areas, seeding at the right time and under the right soil conditions,” Mohr says. “These strategies may be even more important under more marginal conditions. Research to identify management strategies to improve the early season environment and soil temperature to help get the soybean crop established and set up for the growing season remains a priority.”