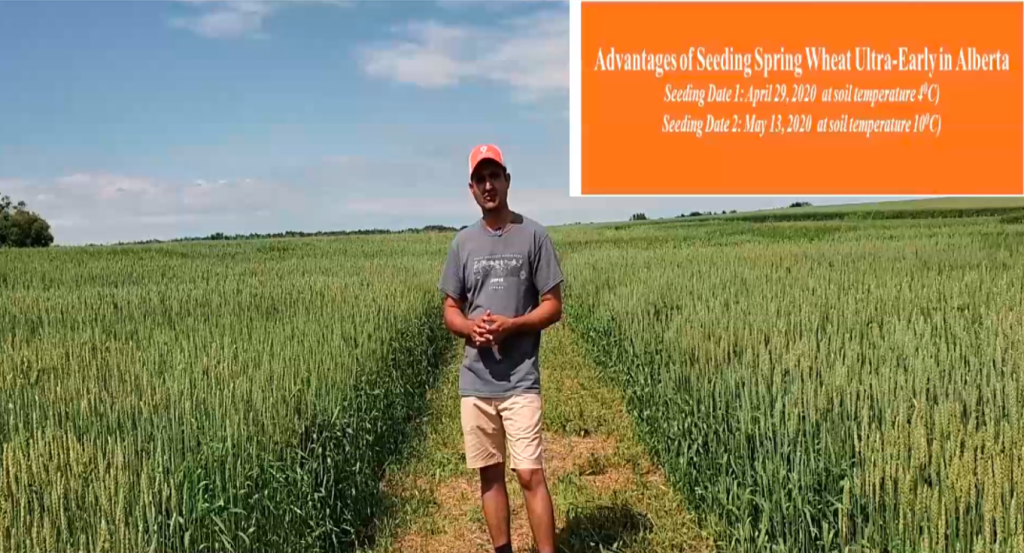 The growing season in much of Alberta is short, which makes sowing and harvesting many crops a race against the clock. Given how many acres need to be seeded each year and the risks associated with late harvest, many wheat producers report that waiting for soil temperatures to creep slowly upwards to the optimal 10-12°C range can be agonizing. Research in various crops from across the country has shown that early seeding can provide upside benefit at acceptable risk in certain cases. Could the same be true for certain varieties of wheat in Alberta? Researchers at applied research organizations around the province have grown test plots for the past three years to determine exactly that answer.

“Research done across the country has shown that as long as the ground is between 2-6°C, wheat can be sown and produce commendable yields compared to wheat stands sown within the normal (10-12°C) seeding range,” says Dr. Nasima Junejo, manager at Battle River Research Group at Forestburg in east-central Alberta. “What we don’t know is what happens when we seed wheat ultra-early in regions around our province: that research hasn’t been done before. How does ultra-early seeding impact critical yield factors in various varieties of wheat planted at different seeding rates and grown under different climatic conditions? That’s what we wanted to find out.”

There are many good reasons to get seed into the ground early. Very early planted seedlings gain access to maximum available soil moisture, moisture that would otherwise be lost to evaporation and weed uptake. An early-to-grow crop has a leg-up on weeds, allowing a crop to maximize yield through lower competition. An early-starting crop can suffer less damage from foliar and head diseases because the crop passes through critical and vulnerable growing stages before disease has a chance to infect. And, an early-seeded crop allows earlier harvest, potentially decreasing the negative impact of damaging heat, late-season drought, or early-fall frosts. Despite the many benefits, early planting carries risk and potential downside too, particularly increased likelihood of frost damage, higher opportunities for seedling diseases, and other yield robbing factors.

Between 2019 and 2021, seven applied research organizations from around the province planted AAC Brandon and AAC Connery, at 200, 300 and 400 seeds per square meter at each of two timings: ultra-early (when soil reached a minimum temperature of 2°C), and normal (when soil temperature fell between 10-12°C, or 10-14 days after the ‘ultra-early’ date). Led by the Battle River Research Association, the project sought to determine yield, thousand kernel weight (TKW), test weight and protein content differences between the varieties, seeding rates and seeding timings.

Results varied around the province, which was exactly the point of the study.

“This research covers a huge area with many different climatic and soil zones. Our goal is to develop regional data according to the unique climatic and soil conditions of each area. The things that work down in Lethbridge, maybe they don’t work in central and northern Alberta. We start with the same idea, but you can’t paint an entire province with the same brush,” says Dr. Khalil Ahmed, Battle River Research Group’s Manager.

In central-northern Alberta, the researchers found that test weight and TKW were impacted by seeding timing and wheat variety, but not by seeding rate. According to the study, both test weight and TKW were greater in normal-seeded stands compared to early-seeded. Likewise, yield proved better in the normal-seeded stand compared to the early. None of the treatments impacted protein content.

“Early seeding is almost always better. It just helps decrease a lot of risk,” she says.

Some regions found unique region-specific results. In the Northern Peace where soils are mostly a silty loam, trenches didn’t always close properly – especially under no-till – at the ultra-early seeding temperature, leading to uncovered seed that was not able to germinate.

As every farmer knows, seeding timing depends on many factors. In some cases, ultra-early seeding is limited by field accessibility because of excess moisture. In these cases, waiting until soil is warmer than 10°C allows some drying.

“As previous researchers have noted, if precipitation happens at normal seeding dates but not in line with early seeding, crops may germinate faster and ultimately produce more yield. Too, the fact that air and soil temperature tend to be higher at grain filling for normal-seeded crops compared to early-seeded crops may contribute to greater yield for normal seeding dates. So, it’s not as simple as saying one seeding time will always perform better than another seeding time,” says Junejo.

The work so far is only a starting place, Junejo cautions.

“There are so many varieties and classes of wheat, and then so many other crops in addition to wheat, that we need to continue research to see how different crops and varieties respond in different regions and under different treatments and weather conditions. We can’t say, in light of only looking at two varieties, that we have definitive results. But we have a starting place and that’s very important.”