May 18, 2016
By By Brian Lada AccuWeather Meteorologist

May 18, 2016 - Much of Canada is in for a very warm summer this year as extended periods of hot and dry weather grip large areas of the country.

The most intense heat will focus on British Columbia, Alberta and Saskatchewan, worsening the drought and increasing the risk for wildfires.

Meanwhile, the threat of damaging storms will stretch across parts of Ontario, Quebec and New Brunswick.

People from southern Ontario to the Atlantic coast can expect not only a warmer-than-normal summer, but also periods of unsettled, potentially high-impact weather.

"July could be an active month in terms of severe thunderstorms, especially from southern and eastern Ontario through southern Quebec and interior New Brunswick," AccuWeather Senior Meteorologist Brett Anderson said.

This includes the cities of Toronto, Ottawa, Montreal, Quebec City, Windsor and Hamilton.

The primary threat with the severe storms will likely be gusty winds and flooding downpours as hot, steamy air spreads into the region from the south.

The threat for severe weather will not be as high in Atlantic Canada; however, AccuWeather Hurricane Expert Dan Kottlowski warns that the region will have a greater chance of being hit by a tropical storm late in the summer compared to last year.

Not only will the fronts bring stormy weather to the East, but also some temporary relief from the overall warmer-than-normal pattern.

"The summer will bring more up and down temperature patterns as frontal passages will be common; however, much of the region from southern Ontario through Atlantic Canada will end up with a warmer summer compared to normal," Anderson said.

Additionally, the humid air across Atlantic Canada will limit how cool it will get during the overnight hours and will also promote more fog.

A hot and dry weather patten will dominate much of Western and Central Canada, worsening the already present drought conditions across British Columbia, Alberta and Saskatchewan.

"The worst drought conditions are currently across Alberta and northeastern British Columbia and we do not expect any significant relief through the summer," Anderson said.

According to the most recent assessment of the drought conditions, large swaths of Alberta are in a moderate to severe drought, including the cities of Calgary and Edmonton. Some portions of southern Saskatchewan and northern British Columbia are also in a moderate drought.

Similar to areas farther east, those across central and western parts of Canada can expect a summer that is hotter than normal.

"The summer will be slightly warmer than normal along the West Coast, thanks in part to the large area of above-normal sea surface temperatures over the northeast Pacific Ocean," Anderson explained.

He added that the increasingly dry soil across the interior will enhance summertime warmth, resulting in an unusually high number of days reaching above 32 degrees Celsius (90 degrees Fahrenheit).

In addition to contributing to a worsening drought, the hot and dry conditions will also heighten the threat for wildfires.

"The 2016 wildfire season got off to a quick start and we expect another active season across the West," Anderson said.

The Fort McMurray fire was an alarming start to the wildfire season, forcing the entire city to evacuate before the blaze engulfed the area. This single fire may end up being the costliest disaster in Canadian history, according to the Calgary Sun.

Other fires are also burning across the region with more likely to start in the coming months due to a combination of lightning strikes, impending heat and dryness.

"Widespread smoke from these fires will be a factor through the summer months, resulting in lower air quality and an increase in hazy skies," Anderson added.

Smoke from these wildfires will be carried thousands of miles downwind, potentially being seen in the skies over Eastern Canada and parts of the United States. 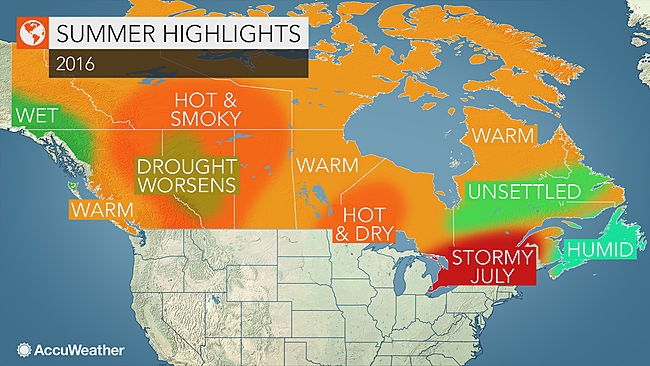