Growers can do little to prevent condition 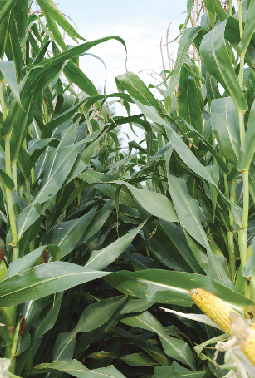 Green stem soybeans. They delay harvest for growers, make combining more of a chore than it usually is and worse still, there is nothing a grower can do against it.

Green stem soybeans, even at just five percent in a field, can impact on combining and shattering in fully mature soybeans.

This latest source of frustration has become a more common sight in fields since the late 1990s as environmental factors such as higher temperatures and insufficient moisture levels occur during critical points in the growing season.

“There were quite a number of fields in 2007 where sporadic plants remained green, especially the stems and some leaves and petioles staying on, causing grief for the combine operators,” says Horst Bohner, soybean specialist with the Ontario Ministry of Agriculture, Food and Rural Affairs. Many of the calls he received in September and October dealt with green stem in soybeans. “The majority say 95 percent of the field would be ready, even too dry, but there would be a few plants remaining green. If you wait for everything to mature, you get shattering on the more mature soybeans.”

Weather conditions, like a hot, dry summer, can frustrate growers on many levels, depending on their timing during the growing season. The heat and lack of moisture during the vegetative stage of the soybean can lead to stunting of the plant as well as poor leaf development. Those same conditions during the reproductive phase can lead to aborted flowering, with subsequent poor pod development and seed fill, as well as open the door to pests and diseases.

Green stem, while it is a product of a hot, dry growing season, reflects a loss of balance in the sink:source ratio within the plant. Loosely defined, the sink is that part of the plant that uses photosynthates (seed) and the source is the part of the plant that produces the compounds (leaves). Under optimum conditions, the best yields result when the sink:source ratio is balanced; the closer that ratio is to 1:1, the higher the yields. If the ratio falters either way, it can have a significant impact on lowering yields.

“That is what’s going on during a hot, dry season,” explains Bohner. “You have too much photosynthate in that plant, too many juices with no place to go since the plant did not set enough seed. Under normal conditions, as the plant dries down, the seed robs the stems and leaves of their juices as they’re trying to fill-up and dry down. But if you don’t have enough pods on the plant and therefore not enough seed, the photosynthate just stays in the stem and has no place to go.”

The result is the plant’s ability to cycle nutrients is diminished, in part due to the lack of moisture. At that point later in the season, the plant cannot dry down and it remains green. Although Bohner concedes there is little or nothing to do to prevent it, he does recommend growers remain mindful of the challenges hot and dry weather conditions can create. “If the green stem situation is really bad, it’s worth thinking about spraying a desiccant,” he says. “If your soybeans are non-Roundup Ready and you’re going into wheat, then it makes sense to spray a desiccant and kill them off, because it’s good to clean up the field for wheat anyway.”

Combining around less mature parts of a field is one of the few management options available at harvest.

Bohner adds there are some other rotational scenarios that require a little more detailed management and that green stems can be a result of certain diseases. Although bean pod mottle virus can lead to green plants, the problem was too widespread and evenly distributed in the fields to be a pest issue in 2007.


Related
What causes some soybean plants to remain green?
Are soybeans truly the ‘resilient one’?
Out-‘slugging’ soybeans an emerging issue
Ontario soybeans out-yield other provinces