A tiny little wasp is turning out to be a farmer’s best friend. Researchers with Agriculture and Agri-Food Canada (AAFC) discovered the parasitoid wasp, Tetrastichus julis, shortly after the cereal leaf beetle was found in Western Canada. The wasp, with help from its friends at AAFC, is helping to keep the cereal leaf beetle, Oulema melanopus, from reaching economically damaging levels.

“This is a bad news good news story. The bad news is that we now have cereal leaf beetle in Western Canada. The good news is that we have a beneficial insect that is quite capable of taking it out,” says Héctor Cárcamo, research scientist at the AAFC Lethbridge Research Centre.

Cereal leaf beetle has been in Western Canada since 2002, first appearing in British Columbia, and was discovered on the Prairies in 2005 at Lethbridge, Alta. In 2006 it was found in southwest Sask.; and around Swan River, Manitoba in 2009. Subsequently, new populations have been found near Edmonton, Red Deer and Olds, Alta.; Moosomin and Langenburg, Sask.; and in fields near Brandon, Holland, Treherne, Killarney and Pilot Mound, Man.

“The distances between the populations mean the cereal leaf beetle is likely moving in hay being transported, as it can’t move those distances on its own,” says Cárcamo.

The cereal leaf beetle has potential to be an economically damaging pest, and attacks many wild and cultivated grasses. The insect prefers wheat, oat, barley, rye, timothy, fescue, grain sorghum and corn. Economic loss is mostly caused by the larvae, which strip the leaves, resulting in loss of photosynthetic activity.

Larval feeding leads to significant losses in crop yield quantity and quality due to reduced photosynthetic activity. Cárcamo says most crop damage is caused by the late larval instars with the fourth instar alone responsible for about 70 per cent of all damage. Feeding at the flag leaf stage is most damaging to crop yield. Adult feeding is characterized by uniform longitudinal incisions. Wheat crops are most prone to the attack by both larvae and adults.

Biological control program keeping beetle at bay
In Alberta, T. julis was discovered in local larval populations of cereal leaf beetle, and no introductions of the parasitic wasp were required. Surveys have since determined that T. julis is expanding its range in southern Alberta in synchronization with the cereal leaf beetle.

The adult female wasp lays four to six eggs into a cereal leaf beetle larva. It overwinters in the larval stage within the pupal cell of its host at a soil depth of three to five centimetres. Overwintered females parasitize mostly early developing beetle larvae at the beginning of the season. The parasitized host larva dies after pupation. Parasitization is high in spring with a peak in mid-May to June. However, the second generation of adults also parasitizes late-maturing host larvae.

“We are lucky we have a parasitoid that can control the cereal leaf beetle. We don’t expect the beetle will reach outbreak levels thanks to T. julis,” says Cárcamo.

Research has also been conducted locally on non-target beetles to see if they are at risk from T. julis parasitism. With the help of a visiting graduate student, Vincent Hervet, and his research team, Cárcamo found that none of the closely related non-target beetles were parasitized. This indicates that T. julis is quite host-specific to the cereal leaf beetle and poses little threat to local biodiversity.

Under AAFC’s Pesticide Risk Reduction Program, the T. julis biological control program was extended in 2013 for three years, ending March 31, 2016. This project aims to continue the earlier relocation efforts to introduce the parasitoid T. julis in cereal production areas where the cereal leaf beetle is most prevalent, but the parasitoid is not yet recorded. The work will include surveying the target areas to assess presence of T. julis in cereal crops as well as mass rearing and releasing the parasitoid in areas where it is needed. The project also includes the use of landscape ecology techniques to identify landscape attributes conducive to successful establishment and long-term conservation of the parasitoid. The resulting information will be contained in beneficial management practices recommended for adoption by growers aiming to maximize the efficacy of biological control of cereal leaf beetle in their crops.

Cárcamo says that if farmers or their crop scout find high numbers of cereal leaf beetle in the field, they should get in touch with their provincial entomologists or AAFC Lethbridge to assess the need for the establishment of a T. julis biological control program.

“We can send you some material to get your own colony of parasitoids established on your own field,” says Cárcamo.

A final message for farmers and crop scouts is that the sprayer needs to be left in the yard. Insecticides applied to control cereal leaf beetles are also lethal to T. julis and counterproductive for the sustainable long-term management of this pest.

“We recommend that you do not spray for cereal leaf beetle because the parasitoids will take care of it. This is one case where a biological control program is successfully holding the pest below economically damaging levels, and we need to help ensure that widespread chemical control is not required,” cautions Cárcamo. 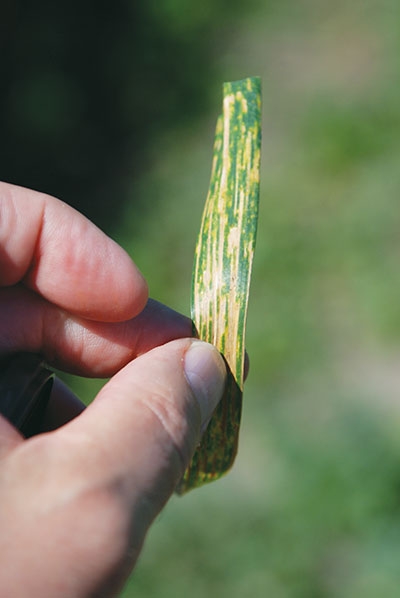 The cereal leaf beetle strips tissue from plant leaves. A tiny little wasp is turning out to be a farmer’s best friend.
Print this page