Double and triple resistance is growing. 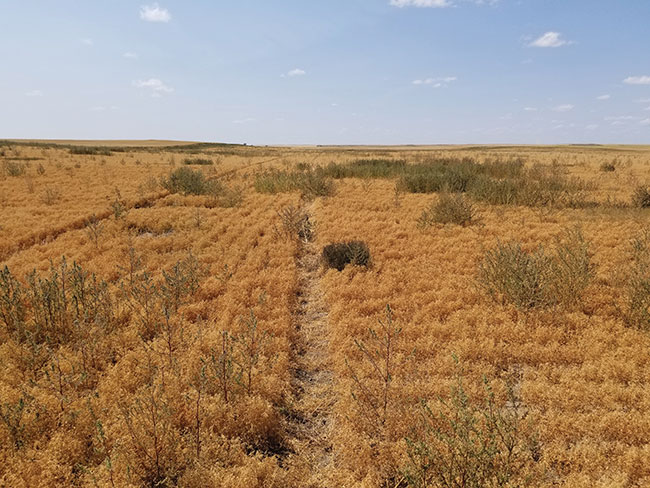 The statistics on herbicide-resistant kochia are staggering. First Group 2, then Group 9, and finally Group 4 resistance was confirmed, along with double and triple resistance to those herbicide groups. Not only are the types of resistance increasing, but the percentage of the populations that are resistant to these herbicides is growing rapidly across the Prairies too.

“One of the projects that we are involved with, along with collaborators from Agriculture and Agri-Food Canada in Saskatoon, is the kochia weed resistance survey. The surveys give us the baseline numbers to see how herbicide resistance is growing,” says Charles Geddes, research scientist at Agriculture and Agri-Food Canada (AAFC) in Lethbridge, Alta. “When we look back at Group 2 resistance in the 1980s, within 20 years essentially all the populations became resistant. We’re seeing the same trend with Group 9 glyphosate resistance, and may also see it with Group 4 herbicides.”

The surveys are staggered by province every five years. For example, Alberta was surveyed in 2012, and more recently in 2017. Manitoba was surveyed in 2018 and Saskatchewan in 2019. Seed from approximately 300 populations are collected in a province after harvest and sent to AAFC. The collected seeds are grown in a greenhouse, and then screened for control by various herbicides.

“That rapid growth is staggering, but we shouldn’t be too surprised. There was a similar trend in Alberta where glyphosate resistance went from five per cent in 2012 to 50 per cent of kochia populations in 2017,” Geddes says.

In the past, AAFC also tested kochia plants that were submitted by farmers and agronomists to test for suspected resistance. In 2020, Geddes will continue to offer this service for dicamba and fluroxypyr (Group 4) resistance. Saskatchewan Ministry of Agriculture’s Crop Protection Lab will begin screening kochia for glyphosate resistance, in addition to the testing offered by the Manitoba Pest Surveillance Initiative. 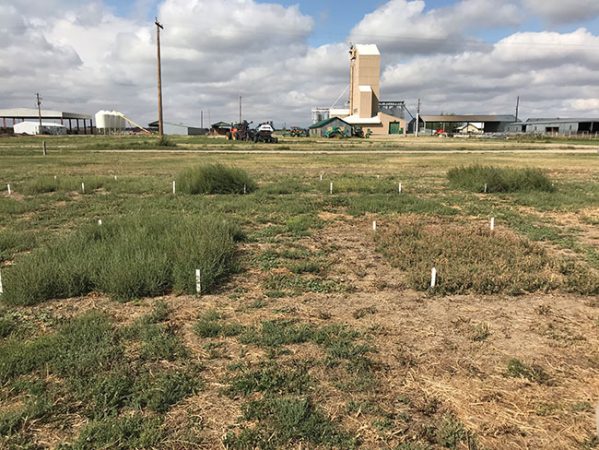 Without (left) vs. with (right) post-harvest application of glyphosate plus saflufenacil on the regrowth of glyphosate-resistant kochia after harvest in early fall.

On-going research into solutions
Geddes and his colleagues are working on several different projects to help manage the development of kochia herbicide resistance. One area that needs work is whether cross-resistance exists within the Group 4 synthetic auxins. Within Group 4, four families exist including benzoic acids, carboxylic acids, picolinic acid, and phenoxies. He says that one especially important active ingredient used as the foundation in many herbicides for kochia control in cereals is fluroxypyr (carboxylic acid).

“Fluroxypyr, in general, is very good for management of susceptible kochia but we have seen some cross-resistance to it and dicamba. But we’ve also seen resistance to one and not the other,” Geddes says. “We’re not sure what is going on with the cross-resistance, or lack of, but it has something to do with the mechanism of resistance, which we need to better understand.”

Geddes says kochia management will increasingly rely on integrated weed management (IWM). Chemical control is part of IWM. The best practices for managing herbicide resistance are a frequent rotation of herbicide groups, plus applying tank-mixes of two or more herbicide groups. This also includes herbicide layering of a pre-emergent and post-emergent herbicide from different groups.

“The idea is to try to improve the crop’s competitive ability and to reduce the amount of seed returning to the seedbank,” Geddes says.

The majority of kochia seed only survive one to two years in the soil. Integrated weed management tries to capitalize on that by trying to achieve better kochia control to reduce the size of the seedbank.

Research by former Saskatoon AAFC research scientist Hugh Beckie found that the time for viable kochia seed to drop to 10 per cent viability in the soil was 235 days, and no difference was found between surface, 2.5 centimetre (cm) and 10 cm depths. However the challenge in trying to manage the seedbank is that one kochia plant can produce about 30,000 seeds per plant. Even if only one per cent of the seeds survive, 300 seeds may remain viable from that one plant after several years.

“We need to better understand the source of the viable seeds in the seedbank because there still seems to be some seeds that can survive and come back to haunt us,” Geddes says.

Patch management of kochia is also important. Controlling herbicide escapes by tillage or herbicide application, or other methods such as mowing, will help limit the spread. Geddes is looking at harvest timing to determine when kochia patches might have time to regrow and set seed after harvest. He is also looking at pre- and post-harvest applications of glyphosate plus saflufenacil (Group 14) to help manage patches and seed production after harvest.

“The results are quite preliminary, but it appears that if harvest is early with a winter cereal, or perhaps field pea or lentil, kochia has the resources to regrow and set seed. In that case a post-harvest application or other patch management strategy would be required,” Geddes says. “If harvest is moving into later September, control might not be needed.”

Geddes also adds a final caution for farmers using pre-seed burndown herbicides. With the increase of glyphosate-resistant kochia, farmers have correctly looked to other herbicide groups for pre-seed control. The Group 14 herbicides, including carfentrazone (Aim), flumioxan (Valtera), saflufenacil (Heat) and sulfentrazone (Authority), generally work well on kochia, but Geddes sees many farmers relying on only those herbicides for pre-seed burndown.

“That’s risky, using only one mode of action. My advice is don’t rely on just a Group 14. That’s essentially doing the same thing we did with glyphosate. With continued selection pressure on Group 14 herbicides, I think that’s where we’ll see the next resistance problem if we don’t use multiple modes of action,” Geddes says.


Related
Group 2 + 4-resistant kochia confirmed in Saskatchewan
Kochia and russian thistle: growing threats
What can we learn from the loss of the world’s greatest herbicide?
Dicamba-resistant canola in the future?