Contracts for even more acres of hemp in Canada in 2013 are expected to be available at Christmas 2012 and snapped up by early February, according to Tom Greaves, director of operations for Manitoba Harvest Hemp Foods (MHHF). About a third of Canada’s hemp production – mostly on the Prairies – is contracted through the Winnipeg food manufacturer.

In 2012, the crop was estimated at 80,000 acres of contract production. Last year, Health Canada licensed a record 50,000 acres but due to extremely wet conditions, only about 35,000 acres were planted.

Manitoba Harvest will have contracts for both natural and organic hemp seed in 2013. Other companies and co-operatives contract for hemp fibre and whole hemp. About 90 percent of production is located in Manitoba, Saskatchewan and Alberta. A few growers are located in Ontario, Quebec and British Columbia.

“The contract rate varies by company and location, but the range we’ve seen in 2012 for organic seed is about $1.10 to $1.20 per clean pound at the farm gate,” says Greaves. “On the conventional you were looking at about 70 to 80 cents a pound. “Production per acre is about 700 pounds of seed, but we have seen 1200 to 1300 pounds. Hemp reacts very well to nitrogen.”

Manitoba Harvest founders, focused on seed and food uses, worked with the Foods Development Centre, Portage la Prairie, to process and package the seeds into products that consumers would find attractive.

Hemp contains the closest to ideal ratio of omega-6 to omega-3 (the World Health Organization recommends a 4:1 ratio and hemp contains 3:75:1.). “Hemp foods are rich in easy-to-digest protein and omegas,” notes Greaves. “A lot of people sprinkle Hemp Hearts on salads, yogurt, or cereal. Hemp Hearts taste great – similar to a pine nut or sunflower seed, are easy to use and so good for you – which is why hemp foods have done so well.”

Hemp Hearts now can be purchased in Safeway, Loblaw and Costco stores in Canada. Americans buy hemp foods at Whole Foods Markets, a health food chain, and at Costco in some regions. Hemp Hearts also are distributed through many smaller stores, in both countries.

Manitoba Harvest helps pave the road for mainstream acceptance, but the collaboration with producers and governments has been essential. Major retailers require production that is reliable in quality, in sufficient volume, and available on a timely basis. Having a closed-loop system allows Manitoba Harvest to properly forecast seed supply and contract only what it will have a market for.

“When people think about Manitoba Harvest, we want them to think about quality,” says Greaves. “Once seed is delivered direct to us, it goes through about 40 quality control tests before the end product is distributed to consumers. We put a lot of time and attention into our organic program, from working with producers to ensuring that our facilities are top notch in adhering to organic processes.”

Processing ended the viability of the seed for germination, but processing coupled with research and development opened the doors to international markets as a food product. “We ship some overseas to the EU but it’s a smaller portion of our business right now because there is so much market opportunity in North America. We’ve been growing by close to 50 percent a year in the past five years,” notes Greaves.

“In this last year, we’ve been closer to 100 percent growth as a result of consumers becoming more educated about hemp. People are looking for healthy substitutes into their diet these days and hemp is a great fit.”

As a vertically integrated company, Manitoba Harvest is involved from seed to shelf. Once seed is cleaned, Manitoba Harvest pulls it to be delivered direct to their facility. Products are made and packaged on site.

Hemp today is a versatile crop that can grow in most areas of Western Canada. It has a deep taproot that works well in drier regions. It prefers medium to light land, but can be grown successfully in heavy soils – such as Red River valley clay – if it has good drainage.

Hemp is able to outgrow most weeds, but it is sensitive to excess moisture at germination and seedling stages. Crop protection products are not registered for hemp, but a level of crop insurance is now available for Manitoba and Saskatchewan growers.

Agronomically, the crop has improved greatly from 1998. The first varieties could reach 12 feet tall and produced legendary harvest trouble. Today’s hemp varieties are bred for high-yielding seed production, for fibre, or for both purposes. Most varieties are five to six feet tall. They need to be direct-harvested with a draper header. Growers can also select long- and short-season varieties.

Cost of production for seed and fertilizer is similar to canola. The budget for weeds and disease control is lower than for canola, but something extra needs to be added for drying.

Hemp needs to be harvested at 18 to 20 percent moisture and then dried to below nine percent. High moisture eases the harvesting. Natural “sisal” fibre in the plants becomes tougher to harvest as it dries down.

Producers also need a Health Canada licence to grow industrial hemp. There’s no cost for the licence, but it does require the GPS co-ordinates for each field and a criminal record check for each contract holder.

The typical first-time production contract is for 80 acres. Given a reasonable growing season, that amount of crop will produce a semi-load or B-train full of product. Manitoba Harvest takes deliveries every month of the year.

“It’s a really great crop for people who want to try something different on their farm to add into their rotation,” says Greaves. “It’s a growing crop and I see that market continuing to grow. I would expect that next year we are going to be looking at 100,000 acres plus, so it’s an exciting time in the hemp industry.” 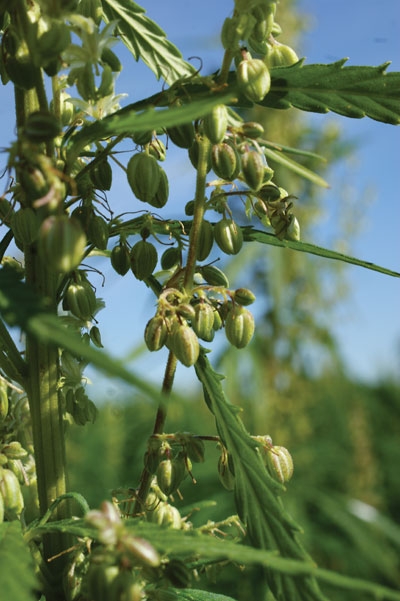 New hemp varieties are easier to grow than in the past. Contracts for even more acres of hemp in Canada in 2013 are expected.