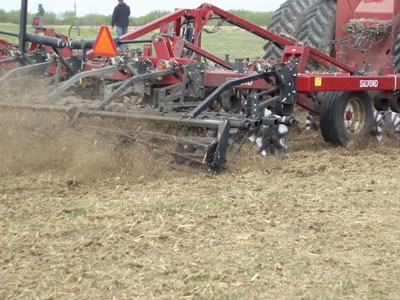 Although it is well established that leaving corn residue on fields provides important soil conservation benefits, heavy residues can also create some agronomic issues. In recent years, the level of corn residue remaining after harvest has increased significantly, due in part to higher plant populations and new hybrids that achieve much higher yields, says Pioneer Hi-Bred agronomist Morris Sagriff, who is based in Tupperville, Ontario. Greater quantities of stover can also be attributed to the use of foliar fungicides and Bt traits that result in stronger stalks that better resist decomposition.

In addition, reduced tillage or no-till practices are leading to more soil-surface residues. Minimum tillage is recommended by some, such as OMAFRA provincial soybean specialist Horst Bohner, as the most reasonable approach to retain the environmental and soil health benefits of no-till soybean cultivation while gaining the soybean yield benefits provided by tillage. However, because leaving greater amounts of residue on the soil surface can have a host of negative repercussions (see sidebar), good residue management practices are becoming more critical in realizing the benefits of a reduced-tillage system.

For livestock farmers, corn crop residues may be of little concern because they are removed as forage. However, stover contains significant amounts of valuable plant nutrients such as nitrogen, phosphorus and potassium, says Sagriff, and if it is removed by cattle or by a farmer for other purposes, “Those nutrients will need to be replaced through increased fertilizer application.”

Options for the cash crop operator
“Hybrid selection is critical to establishing productive stands and achieving high yields,” says Sagriff. “Pioneer annually conducts early planted emergence trials in high-residue fields to evaluate hybrid performance under early season stress. We provide growers with ratings for stress emergence and high-residue suitability on all our hybrids to help growers select the best hybrids for their fields.”

There is also an assortment of tillage equipment that deals with stalks post-harvest, and allows residues to break down more quickly and be incorporated into the soil. This means the soil benefits from both added nutrients and organic matter. “Processing stalks at the corn head and distributing residue evenly behind the combine can be an initial step,” says Sagriff. “Following this up, where practical, with some form of primary fall tillage is important to begin the process of stalk decomposition.”

Spring tillage is another option to reduce stalk residue for successful planting. Planters can be equipped with devices that cut and move residue so that a six- to 10-inch path in front of the planting unit is provided. “This allows for residue management and planting in one pass, which will help reduce compaction,” adds Sagriff.

Effective residue management is about long-term planning, stresses Dave Vandenbrink, owner of Vandenbrink Farm Equipment, near Sparta, Ontario. “There’s no magic bullet to solve the issue,” he says, “so it’s a matter of growers looking at their particular situation and taking a systems approach.”

That might include chopping stalks with a corn head or using vertical tillage.

Many tillage units are available on the market, including the Salford RTS vertical tillage unit, Great Lakes New Holland Landoll VT Plus Amazone Catros, and the Gregoire Besson Disc 0 Mix. Vandenbrink says he has sold many Case IH 330 turbo vertical tillage units since they became available in 2007. “Conventional, minimum-till and no-till farmers use it,” he notes. “Customers are using it in the spring and fall, but it’s primarily sold as a spring implement for soybeans after corn or for corn after corn.”

Ryan Lofthouse, who runs a cash crop operation in Tillsonburg, Ontario, and also operates Lofthouse Custom Farming, says he has to manage heavy residues well because of his high corn plant populations (32,000-34,000 seeds per acre). “Also, where I use foliar fungicide, the plants stay healthier and greener longer and resist breaking down compared to where I haven’t sprayed, and residue is a problem that way as well,” he says.

Lofthouse finds the Case IH 330 mixes the residue with the soil in just the right amounts, not going as deep, or compacting the soil, like a disc harrow does. “I’ve found that with cutting and incorporating the pieces into the top two to three inches of soil, I get good breakdown and it increases the organic matter in our soil nicely,” he observes.

The farm’s soil ranges from sand to loam to heavy clay. “It allows us to till a little and chop the stalks at the same time, and there is decent soil structure when we’re done,” observes Lofthouse, “with a good smooth seed bed to plant into. We don’t have to cultivate.”

Before stepping up residue management practices, he was noticing significant plant stand problems with the farm’s no-till soybeans. “We were losing 25 percent of the plants,” Lofthouse says. “We couldn’t get good soil-to-seed contact, and the disease pressure from slugs was higher.”

He tried dealing with residue in the spring, but it was not enough to deal with those particular issues. “I found my soybean yields were better with chopping and mixing in the fall to start breaking the residue down,” he observes.

Lofthouse now leaves residue on his fields for a week to 10 days, or longer if weather permits, before he starts processing it. “It lets it dry out a bit,” he notes, “and makes it just that much easier to handle.”