The outlook for hard white wheat production in Western Canada nudged upward this past winter for the first time in approximately six years. 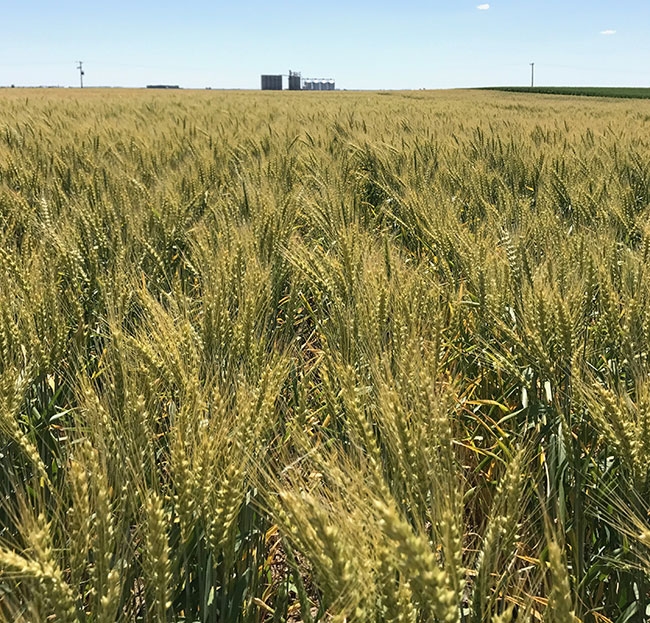 AAC Icefield at Quattro Ventures near Bow Island The outlook for hard white wheat production in Western Canada nudged upward this past winter for the first time in approximately six years.

For the Prairies, it has been the “little wheat that could” but couldn’t quite get over the mountains and into the major leagues of world class wheat exports.

But a promising new spring hard white variety, HW388, now is being developed alongside a new winter hard white wheat, AAC Iceberg. Both are in the seed production programs of FP Genetics in Regina, and scheduled for commercial release in 2020.

Encouraging news for fans of hard white and diversification.

The Canada Western Hard White Spring (CWHWS) class has a short history. It came into its own with breeding that began in the 1970s in Manitoba. It soared to a half-million acres of production around 2010 to 2012, then dropped out of sight when buyers balked at prices for extra segregation.

SeCan continues to have growers for Snowstar, Whitehawk and AAC Whitefox. Alliance Seed is managing AAC Iceberg. Jim Downey, research and development manager for SeCan Western Canada, says the three lines are solid varieties. “They have improvements over the early ones, and guys who grow them have had good yields. We’ve placed them with three seed growers so that a supply remains available if needed,” Downey says.

He adds, “There is some renewed interest (in hard white) from some end users as a specialty wheat, but not a huge scale from what I see.”

Hurdles ahead
Hard white wheat is major commodity for Australia, and a major import item for Asian markets, but it remains stymied in Western Canada.

Breeders have a huge hurdle, working with recessive genetics. Millers and grain companies face cost hurdles for segregating the white-coated wheat each step from field to market. And, growers have hurdles in segregating it, for identity preservation, on their own farms.

“You can’t blend it, and most end users aren’t willing to pay the premium to keep it segregated. If the end user doesn’t want to pay a premium, why would you grow something and have to segregate it,” Downey asks.

“Grain companies and millers are going to need an extra 25 to 50 cents a bushel just to keep it separate in the system, after they pay growers a production premium for their efforts,” he says.

“It’s two-to-three times as hard to make a good white wheat as it is to make a good CWRS [Canada Western Red Spring] wheat because of the genes in the seed coat color,” Cuthbert says. “We’re continually getting new traits from the red germplasm because it’s the most established. It’s where we get straw strength, Fusarium head blight [FHB] resistance and most disease resistance genes. There are one-to-three genes involved in the seed coat color, and white is a recessive trait, so whenever we make a cross with the red, we’re always trying to get back to the white seed coat. It’s like pushing a boulder up a hill,” he says.

For hard white wheat to gain a serious share in the CWRS market, he says, it needs to be more competitive in agronomics, disease resistance and in yield.

“HW388 is a big improvement in agronomics compared to white wheats that are available currently, and its disease resistance it quite a bit better,” he says. “It’s becoming comparable to Carberry, the standard in CWRS, in yield and agronomic type and even disease resistance. My preliminary look is saying that it’s around five per cent more grain yield than Carberry this year. It may perform pretty much as well as the new CWRS, AAC Brandon. ”

Other characteristics of HW388 are showing straw that is shorter and stronger than Carberry, improved FHB resistance over other hard white varieties, plus resistance to wheat leaf rust, stem rust, stripe rust and loose smut. It also is suited to grow nearly anywhere in Western Canada.

Nutritional benefit
If Canada has breeding hurdles for hard white wheat, it also has the nutritional strengths of hard red wheat. In time, as consumers become more selective on health issues, the hard white wheat breeder can be optimistic.

“There are nutritional benefits to our hard white wheat, compared to what’s being traded globally,” Cuthbert says.

“It’s not that the seed coat is white. It’s that the seed coat is thinner,” Cuthbert continues. “That allows our white wheat to be milled as a whole grain. We can produce whole wheat bread that looks more like a loaf of white bread, but with improved nutrition of the bran and germ. It won’t have the off-color or the off-taste that’s typical of brown whole wheat bread.”

FP Genetics first picked up AAC Icefield from Dr. Robert Graf, AAFC winter wheat breeder at Lethbridge, Alta. It was released in July 2015 as an experimental wheat. For now, AAC Icefield is in the Canada Western General Purpose Class.

The yield of AAC Icefield is rated as 104 per cent of Radiant hard red winter wheat. It has slightly lower protein than Radiant and is rated fair for winter survival. It is shorter than Radiant, has very good lodging resistance and is resistant to stripe rust. Because it is moderately susceptible to Fusarium, the market is expected to be in the western provinces.

FP Genetics was able to harvest its first Select field of AAC Icefield in 2017. It was under pivot irrigation in southern Alberta, and was an eye-opener.

According to a preliminary report from Quattro Ventures in Bow Island, Alta., the new hard white winter wheat yielded between 90 and 100 bushels to the acre.

“Having yields in a similar zone as hard red wheat is important to sustaining a long term white wheat market,” Wehrle says. “The exciting thing is that AAC Icefield provides all the benefits of a winter cereal – higher yield and a different crop cycle.”

He adds, “It’s planted in the fall and comes up quick in the spring and is harvested earlier in the summer. It’s got some unique attributes for risk management, for rotation, workload management and even environmental management as a fall cover crop that’s ready to harvest in July. It’s a different crop cycle opportunity.”

“It’s been similar or slightly better in milling and baking characteristics to the hard red winter wheats. It has a whiter loaf and better water absorption,” he says.

Opportunity ahead
Clearly, with two new hard white wheat products, the chief promoter for FP Genetics is excited about the potential for growers. Now he needs to convince the growers and the market.

“We understand that, with hard white wheat it’s going to take more time and market development. By no means will this be an easy market,” Wehrle says. “We’re going to need to be a little more discerning in finding markets where these products will fit and provide good value to the end user.

“We believe the wheats we are bringing into the market probably won’t get to the artificial half-million-acre size that we had with Snowbird, but they certainly will be an alternative to Australian hard white, and we will have an opportunity to compete for North American whole grain bread products.”