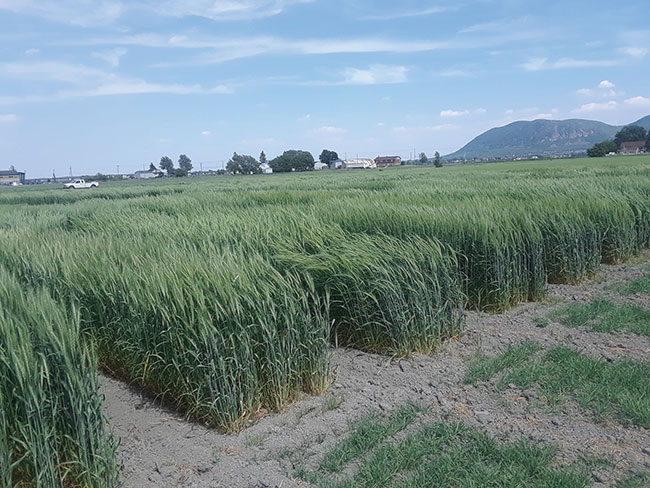 Winter wheat is not yet a major crop in Quebec, but breeder Michel McElroy is working to improve the crop’s potential for success in the province with the help of some innovations in germplasm sourcing, winterkill assessments and breeding selection strategies.

“Generally, winter wheat is about 10 to 15 per cent of all the acres seeded to wheat in Quebec – much less than spring wheat,” notes McElroy, a researcher with CÉROM (Centre de recherche sur les grains). “But winter wheat is definitely gaining some momentum here. More and more crop growers are finding out about the benefits of this crop, such as its increased yield potential, its tendency to have less disease [and fewer weeds], and its soil health benefits from providing soil cover during the winter.”

One key barrier to adoption of this crop is the risk of winterkill. “Winter wheat can be risky in a lot of areas in Quebec because there is the potential for complete wipe-out of the crop. We saw that in 2019 when about half of the seeded acres of winter wheat were wiped out by winterkill,” he explains.

However, he points out that breeders, agronomists and others are addressing that challenge. “We are improving survival through genetics and through new agronomic practices. Also, the Quebec crop insurance program (FADQ, La Financière agricole du Québec) recently changed the rules to allow claims for losses due to winterkill. That is giving a big boost to people who want to try winter wheat but are wary of the risk.”

Another barrier to adoption can be fitting a fall-seeded crop into a rotation. “Normally in Quebec, winter wheat follows soybeans,” McElroy says. “If producers choose later-maturing soybean varieties because of the higher yield potential, they may not have time to plant winter wheat after. But the producers who do recognize the benefits of winter wheat are figuring out strategies to integrate it into their rotations.”

“There is also a pretty viable feed market in Quebec,” he adds. “It is as large as and sometimes even larger than the milling quality wheat market, and it has similar prices in some years, too. As a breeder, it is handy to have an alternative market. For example, if we have a line that is very high yielding and fits all the parameters except for milling quality, there is still a chance to get it onto the market.”

The breeding program focuses on three areas for varietal improvement. “First and foremost, we target yield because that is what producers are looking at and that is what they need to make it worthwhile for them. But yield is a complex trait. I tend to think of winter survival as being a major determinant of yield in Quebec; if half of your crop does not survive the winter, then your yield is going to reflect that. So, we work on yield and yield potential as well as factors that affect yield such as survival and lodging,” McElroy says.

“Second is resistance to Fusarium head blight, a disease that obviously has some very important impacts on yield and grain quality, both for the human market and the animal market. We take Fusarium resistance very seriously and we test a lot for it.

“And third is quality, making sure that our varieties meet the requirements of local millers. It is really fun working with them to figure out exactly what they need from our lines.”

Field evaluations of the program’s breeding lines take place in Quebec’s three zones for cereal production: the Montreal region, the Quebec City region, and the Bas-Saint-Laurent region. The program also has exchanges with the University of Guelph and Agriculture and Agri-Food Canada (AAFC) in Ottawa to see how the lines perform in Ontario’s winter wheat belt. This year, the program also has a trial in New Brunswick because of interest in the potential for winter wheat production in that province.

Expanding germplasm resources
“We’re very lucky at CÉROM that the base of some of our germplasm came from a now-defunct Agriculture and Agri-Food Canada breeding program in Quebec City that was focused almost entirely on Fusarium resistance. As a result, we have a lot of really good material to work with for Fusarium resistance. We just need to integrate that trait into material that is also high yielding and high quality, and has all the other traits that producers are looking for,” notes McElroy, who has been leading the CÉROM winter wheat program since 2017.

“My predecessor at CÉROM spent a lot of time testing the germplasm from the AAFC program and crossing it into established cultivars from Eastern Canada and some material from Western Canada. I have continued on with that.”

McElroy is also seeking out some new sources of important traits. “I’ve sourced some germplasm from western Europe to see if we can find more interesting lines for milling quality, particularly for our specialty millers that are looking to produce baguette-standard flour,” he says.

“I have also been sourcing material from what I would call the frontiers of winter wheat production across the world – the northern boundaries of winter wheat production, like Scandinavia, the Baltic, Russia and northern Japan. We want to evaluate that material to see if there are winter survival traits that we can integrate into our program, particularly as it relates to tolerance to ice and freeze-thaw.” 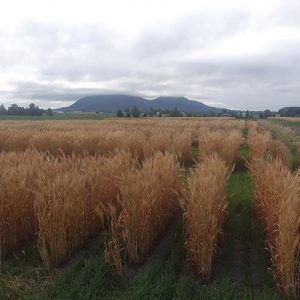 The breeding program is working to improve winter wheat’s potential for success in Quebec. 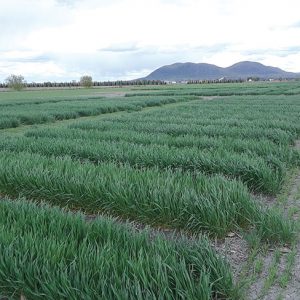 Waterlogging, freeze-thaw and winterkill
“Sometimes people think of winter survival as just a cold temperature issue, but it is really a syndrome of all sorts of stresses, both biotic and abiotic. And the winter survival issues here in Quebec are not the same as in Western Canada or the United States,” McElroy explains.

“From what I have observed in Quebec – and I’ve had my share of winter survival problems in the program for sure – you see the heaviest winterkill in those little depressions in a field where puddles form.”

Winter wheat plants that happen to be in these little puddles tend to be especially affected during late winter/early spring freeze-thaw cycles by stresses such as frost-heaving, ice encasement and waterlogging; they also have an increased risk of root diseases. All those stresses result in poorer survival.

McElroy would like to be able to breed winter wheat varieties with improved resistance to these waterlogged/freeze-thaw conditions. However, to do that he needs a consistent, reliable way to evaluate the response of different genotypes to these conditions.

“It is a very difficult problem to evaluate year after year. You are at the mercy of the weather and the patchiness of the stress,” he says. “In some years, all the lines might have good survival; in other years, all the lines might have poor survival. And even when you hit that nice middle point where some of the lines do well and some do badly, the patchiness of the stress is such that it is hard to say whether a particular line has survived because it has the genes that allow it to survive or it just happened to be in a lucky spot in the field a little above the other lines, so it didn’t get that accumulation of water.”

So, McElroy and Dave Hooker, associate professor of field crop agronomy at the University of Guelph-Ridgetown, are collaborating on a project to develop an inexpensive field method to evaluate the performance of winter cereal plants under excess water/ice stress.

Their idea is to modify the soil surface of their plots to deliberately create those little depressions. They create a series of furrows and hills, and then seed winter wheat in the bottom of furrows and the top of the hills so they can compare how each line performs in waterlogged versus non-waterlogged conditions.

“This was a completely novel idea, and I give credit to the Grain Farmers of Ontario and the Quebec Seed Producers (Producteurs de semences du Québec) for taking a chance on funding this project,” McElroy says.

“Our results so far have been mixed – the more you peel away at this problem, the more complex it seems to be. But that just inspires us to try new things to try to find something that will work.”

Genomic selection
In another interesting collaborative project, McElroy is working with Jaswinder Singh at McGill University to develop a more efficient selection process for his breeding program.

“This project involves genomic selection – a relatively new method that uses genomics to try and accelerate the selection process in plant breeding,” McElroy explains. “Genomic selection is a little like marker-assisted selection, where you check individual genotypes for the presence or absence of a DNA marker associated with a particular gene. But instead of focusing on one or a few single genes, genomic selection takes advantage of new technology to get markers from all across the genome and then makes predictions about plant performance based on the sum total of their contributions.”

McElroy worked on genomic selection in his post-doctoral research, and he is keen on integrating it into his winter wheat breeding program.

“Our project is essentially a pilot to see how well we can predict key traits based on different genomic selection models,” he says. “And we also want to see how we can best apply genomic selection to the breeding program, whether it is better to use it for selecting individual lines, for selecting crosses, for figuring out which populations within segregating populations to move forward. So, the project is a fascinating combination of pure science and very applied work.”

Promising lines
“We have two lines right now that have just completed their final year in the Quebec registration trials. One is likely headed toward the feed market, but it has excellent yield and really good Fusarium resistance. The other is a milling quality line with good Fusarium resistance and competitive yields compared to the hard red wheat cultivars grown in Quebec right now,” McElroy notes.

“When it comes to winter cereals, every year is different in Quebec, so we can’t count any chicks before they hatch. But we’re really looking forward to seeing the results from the trials this year and finding out what the recommending committee thinks in early 2022.”

“I am excited for the future of winter wheat in Quebec,” he says. “Winter wheat growers are still a minority in the province right now, but they are really passionate about this crop. Their passion has really inspired me in my work on this crop. I’m very excited about the possibility of having one of my lines out there on the market and seeing it in a farmer’s field one day.”