“Along the entire eastern seaboard, craft breweries and craft maltsters are starting up, and everybody wants to know how to achieve malting quality with barley grown on the East Coast,” says Aaron Mills, a research scientist with Agriculture and Agri-Food Canada (AAFC) at Charlottetown.

Very little research has been done on malting barley production practices in Eastern Canada – Mills calls it “uncharted territory.” So he is leading a project to develop information that eastern growers need to produce this relatively high-value cereal crop either as a commodity or for craft brewery niche markets.

The impetus for the research came out of Mills’ long-standing interest in brewing.

“I’ve been brewing at home ‘all-grain’ [a brewing method] for over a decade, and I also worked in a craft brewery for six months after I finished my PhD. So I’m familiar with the industry and with the need for local ingredients. When I started working here in P.E.I., I noticed there wasn’t a lot of malting barley being grown. So we decided to give malting barley a shot and see what we could do.”

He notes, “In P.E.I., we grow approximately 60,000 acres of barley. That is all feed barley. Malt barley and feed barley are almost like two different crops because the management is so different. You really have to baby the malting barley; a fungicide program is a very important part of growing malting barley on the East Coast.”

Mills’ five-year project (April 2013 to March 2018) is funded by the Alberta Barley Commission, the Brewing and Malting Barley Research Institute and AAFC under the National Barley Research Cluster.

The project’s main objective is to examine how different production practices affect malting quality characteristics. “We would like to provide information for growers to make it easier for them to successfully produce a high quality crop. We want to generate some local data that can serve as a benchmark for local growers,” Mills says.

“We’re looking at the influence of seeding rate and fertility rate on two malting barley varieties from out west, and we’re looking to see if the response is similar at five sites in eastern North America.”

The five sites provide good coverage of the cereal growing region in the east: Princeville, in southern Quebec (with Semican); Ithaca, in upstate New York (with Cornell University); Ottawa, in eastern Ontario (with AAFC); New Liskeard, in northern Ontario (with the University of Guelph); and Harrington, P.E.I.

The project builds on a previous malting barley study in Western Canada led by John O’Donovan, an AAFC research scientist, and follows similar methods. The treatments compare seeding rates of 200 and 400 seeds per square metre, and nitrogen fertilizer rates of zero, 30, 60, 90, and 120 kilograms per hectare.

The project team is examining the effects of these treatments on such characteristics as crop growth, yield, disease, lodging, days to maturity, percentage of plump seed, and protein content.

As well, the Canadian Grain Commission’s Grain Research Laboratory is malting the harvested grain and testing it for properties that are important for malting and brewing (such as fine-grind extract, Kolbach index, wort beta-glucan, diastatic power and alpha-amylase).

Mills explains that seeding rates between 200 and 400 seeds/m2 are generally recommended for malting barley. O’Donovan’s research in Western Canada found that 300 seeds/m2 was the optimum seeding rate for malting barley yield and quality characteristics, such as protein level and kernel uniformity. Seeding rates that were too low tended to increase the number of non-uniform kernels and increase tillering, which could lead to delayed maturity. Seeding rates that were too high not only increased input costs but also tended to increase the risks of poorer yields and lower kernel plumpness and didn’t improve protein or kernel uniformity.

Nitrogen rates also tend to be a balancing act between too much and too little.

Mills’ results to date show higher nitrogen rates are not good for malting quality under eastern conditions. “The higher rates of nitrogen translate into a much higher protein level. For malting barley, you want the protein content to be around 11 to 13.5 per cent. With some of the higher rates of nitrogen, the protein content was at 17 per cent, so it automatically kicks the grain out for malting quality.”

He also notes, “It has been difficult to dial in the appropriate level of fertility that is optimum for both yield and quality.”

Another important preliminary finding from Mills’ project is that the crop preceding malt barley seems to have a tremendous effect on malting quality. “For example, buckwheat seems to be a really good crop to precede malting barley. But crops like a clover are absolutely terrible for malting barley quality.”

He thinks the main factor in the poorer quality after a clover crop is likely the residual nitrogen in the soil, but he suspects some other factors may also be playing a role.

Mills is also taking part in some multi-agency research to test modern and heritage barley varieties in eastern North America. He explains that Ashley McFarland of Michigan State University has formed the Eastern Malt Barley Working Group, which stretches from Illinois to P.E.I.

“Everyone involved is working to find out how to get acceptable yield and quality to produce malt barley locally,” Mills says.

In one component of the group’s work, Richard Horsley of North Dakota State University is leading a Brewers Association-funded project, the Eastern Spring Barley Nursery, to evaluate about 25 spring barley varieties at about eight sites in the east.

Another component involves partnering with Chris Ridout from the John Innes Centre in the United Kingdom.

Mills notes, “This research institute has brought 80 barley accessions out of long-term storage. They’ve already fully developed the value chain for one heritage barley variety, ‘Chevallier,’ for modern use in the craft beer industry in and around Norwich, England, as well as a few larger craft breweries in the U.S., including Sierra Nevada and Goose Island.” Researchers in the working group are evaluating these U.K. heritage varieties at their sites.

He thinks heritage barley varieties could be of particular interest to craft brewers. “The varieties would have to be at least as good as the ones they are buying now. But if they can also attach a story to the barley, I think that’s part of the appeal for the brewers and the brewery owners. Craft brewers are also interested in developing beers with different flavour and aroma characteristics, and the use of heritage barley varieties may be one way to develop those qualities.”

Mills concludes, “We’re trying to evaluate these varieties and hammer out the agronomy as quickly as possible. For example, we have three craft maltsters that are hoping to open up this year in P.E.I., so there is going to be some local market demand in the near future. It would be nice if we had some locally grown barley to put through those maltsters and get our growers into that value chain.” 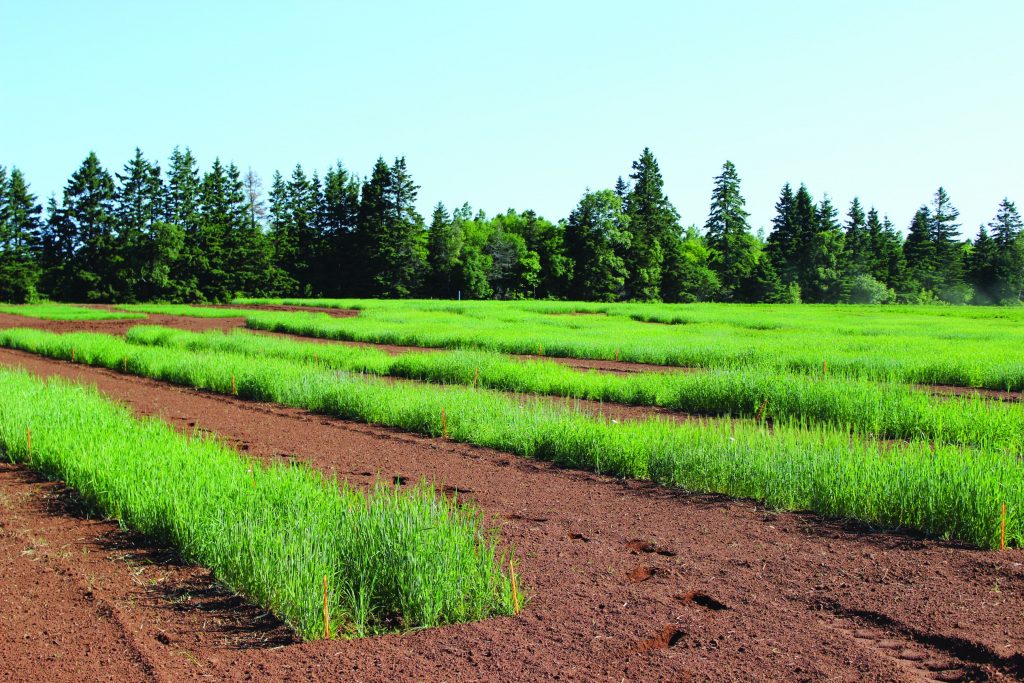 The malt barley research site at Harrington has about 300 plots consisting of agronomy trials and evaluations of modern and heritage varieties.