Are dandelions a good indicator that it’s time to throw in the towel on your alfalfa? “This may not be true, especially if alfalfa stand is still good,” says Dr. Tarlok Singh Sahota of the Thunder Bay Agricultural Research Station (TBARS), founded by the Ontario Ministry of Agriculture, Food and Rural Affairs in 1991, and operated by the Thunder Bay Agricultural Research Association since 2003. 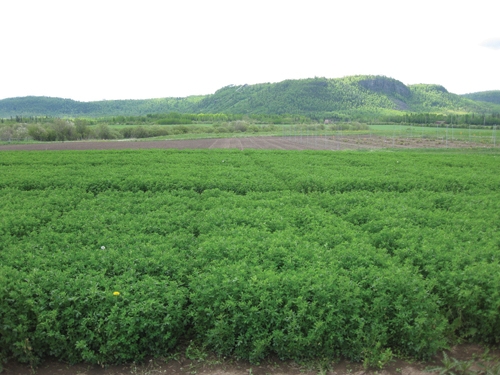 Alfalfa (second harvest year) plots at Thunder Bay Agricultural Research Station (TBARS) with one or two dandelion plants. Are dandelions a good indicator that it’s time to throw in the towel on your alfalfa? “This may not be true

“I have seen, through research and through working with many farmers who have changed their fertilization practices, that better-fertilized alfalfa can compete well with dandelions. Alfalfa plant count, not dandelions, should be a criterion to keep or kill alfalfa.”

Indeed, the key to prolonging stands of alfalfa with good yield of quality feed, says Sahota, lies in providing an adequate supply of sulphur (S) and boron (B) each spring. Sahota has been raising concern about S deficiency on Ontario farmlands since 2004. “Folks in southern Ontario raised eyebrows then, but the same folks are now talking a lot about S,” he notes.

Sahota has found that application of 12 kg S and 0.4 to 0.8 kg B per acre can bring in $10 to $12 dollars return per dollar invested in these nutrients. “Farmers have reported high yields of better quality harvest and prolonged stand of alfalfa that lowered seed cost per acre every year,” he notes. “Using S and B also lowers other costs such as fuel and wear and tear of farm implements because the fields don’t need to be tilled as often.” Sahota says the application of S and B is even more important on rolling or sloped land where nutrients are more easily lost. Some farmers have also reported better dairy or beef herd health with this fertilized alfalfa.

“Alfalfa is known to remove sizable quantities of S from soil,” Sahota explains. “In the case of S deficiency, the entire shoot, especially the top half, looks pale green. These symptoms are different from N deficiency symptoms, where the lower leaves first become pale green and then yellow.” Boron deficiency affects flowering and reduces seed set in alfalfa plants. As the deficiency becomes severe, the youngest upper alfalfa leaves become yellow to red. Growth can be stunted and winter hardiness reduced.

Sahota suspected S and B deficiency in several fields of alfalfa in the Thunder Bay area around 2004, especially in sandy soils and in stands older than two or three years. “With B, the soil test is not as reliable as a tissue test,” he notes. “Through a lot of testing, I can now say that most fields around Thunder Bay are deficient in available B.”

What to apply
Although it’s well known that ammonium sulphate or potassium sulphate is preferred to elemental S because the elemental form takes 12 to 18 months to be converted into the sulphate form (which is readily available to crop plants), Sahota wanted to see if this held true over the long term. He also wanted to test B fertility rates. “We tried to find an answer by comparing ammonium sulphate, urea and urea supplemented with elemental S, to equal the N and S from ammonium sulphate,” he says.

Several Thunder Bay area growers took part in the testing. To alfalfa fields in spring, they applied urea, ammonium nitrate and ammonium sulphate at different N rates, with and without B application. Two-thirds of the elemental S in this experiment was applied at seeding and one-third in the first harvest year. “The first three harvest years (2005 to 2007) measured direct effects of the nutrients that were applied every year, and the later years (2008 and 2009) measured residual effects of the nutrients applied during the first three years,” Sahota explains.

In terms of results, the harvest of the first year indicated that the application of elemental S gave no effect on yield (as expected), but from the second harvest year onwards, dry matter yields of alfalfa from ammonium sulphate and urea supplemented with elemental S (to equal N and S supply from ammonium sulphate) were similar to the application of elemental S. “However, elemental S isn’t necessarily a cheaper source of S, especially if it’s sold in small bags,” Sahota notes.

Beef farmer Bruce Forrest has been applying S and B since 2005. He says that this provided the alfalfa with better persistence and noted that the leaves seem to stay on better at harvest. “Before we used ammonium nitrate, then urea and now we use ammonium sulphate (that has S) and B,” he says. Dairy farmer John Grootenboer has also used ammonium sulphate and B since 2005, mixed with PK fertilizers. “You get a stronger alfalfa, a more vigorous plant, that can better withstand drought,” he observes. “And it works down the line – you’re feeding higher-nutrient material to the cattle and it helps with their health.” “It’s now been determined that S deficiency is widespread on Ontario farms,” Sahota concludes. “I am reasonably sure that alfalfa growers all over the province could benefit from application of S and B.”

And dandelions and alfalfa?
“A farmer’s decision to rip off alfalfa fields is governed by the decline in alfalfa yield, or for rotational reasons,” Sahota notes. “Dandelions come to flowering at or just before alfalfa picks up growth. Since alfalfa has enough stored food in its crown and root, it can compete well with dandelions, provided it has adequate stand, and that depends a great deal on fertility.”

Sahota noted in his long-term experiment that last year’s cold, wet spring resulted in great dandelion proliferation, “so much so that the alfalfa stems had to bend to come out of the dandelion leaves, but the plants did make it to a good, normal crop.” It was a good demonstration of how alfalfa starts growing when dandelions have already almost stopped their vegetative growth and have turned to flowering. “This means as long as you have at least five alfalfa plants per square foot/or a stem density of 40 to 55 per square foot in a three-year-old or older stand,” Sahota asserts, “you don’t have to rip alfalfa fields unless in your rotation of crops, it is an absolute necessity.” This study at TBARS is the only long-term study on S and B nutrition in alfalfa in Canada. “No other agricultural research facility has done this,” said Sahota.

Over the even longer term, Sahota says that as long as growers can maintain 0.20-0.25 percent S in alfalfa, he recommends that they can continue with alfalfa. “Time doesn’t seem to be limited as far as our experiments (now in their ninth year) have shown,” he notes.