Industry insists course must be maintained. 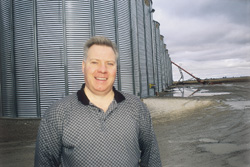 The future of identity preserved markets in soybeans can appear somewhat shaky
or on the rebound. It all depends on who is offering their opinion.

Based on the three years prior to 2004, IP soybeans have had a tough time,
with tightening profit margins and poor quality resulting from drought, heat
and aphids. Even into 2004, talk among many in the field was that IP soybeans
were less attractive, with some predicting a move to conventional crush type
or Roundup Ready varieties in 2005.

But many of those discussions took place at a time when prices were around
the $10 per bushel mark. By November 2004, prices were at the $6.00 per bushel
level, Monsanto had announced an increase in its technology use agreement costs,
and many growers began pondering the place for IP soybeans in their operations.

Talking to those involved in the industry, there is little doubt about the
future for IP soybeans. Most agree it is that one aspect of the trade that differentiates
Ontario's soybean production from the US or Brazil. That, and the fact the market
provides the grower with a premium for their extra effort. These are the two
primary reasons that IP markets will continue in spite of weather challenges
and any reluctance on the part of growers.

Rob Templeman, field agronomist with Pioneer Hi-Bred, acknowledges the difficulty
IP soybeans are having. Early in the 2000s, Templeman suggested there were so
many growers joining the ranks of the IP market that it was rapidly becoming
a commodity, yet he maintained that IP markets were a necessity for Ontario
growers and its industry. Now, he also recognizes the challenges of maintaining
that IP marketplace. "The IP markets in certain areas, like the food-grade
export market, continue to be there, while other IP markets for things like
GMOs, may disappear over time," he says. "Geographically in Ontario,
the key areas where you've got the outlets or the companies that are paying
the premiums, the growers continue to support it."

Perception in price leads to reality
Part of the problem with the reluctance to grow IP soybeans is wrapped around
pricing issues. At $10 per bushel for commercial soybeans, a $1.00 per bushel
premium does not mean as much as an extra dollar on a $6.00 per bushel price,
according to Martin Harry, eastern marketing representative with SeCan Association.
In that light, perhaps the IP soybean situation is at a cyclical low. "The
prices, those are certainly cyclical, and the IP quality has been there, this
year," says Harry, agreeing the IP system has suffered through the past
two to three years. Crops were harvested, but quality was lower than expected.
"This is the first year in the past four or five where we've had them coming
off dry and clean, so up until shortly into October, it was a great harvest." 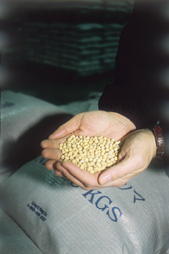 Harry acknowledges that some growers will stay with conventional or Roundup
Ready soybeans, in spite of the increase in TUAs or the demands for specific
management protocols or the perception that IP is becoming a commodity. "That's
never changed, growers determined that a long time ago," he says. "In
the late 1990s, when many jumped into IP soybeans, a lot of the industry became
IP purchasers, and it was going great, but many didn't stay in the IP game because
they didn't do the necessary management behind it and thus some in the industry
backed away."

No matter what, states Harry, growers and the industry must have the IP soybean
market as a viable option, where growers are committed to the marketplace, allowing
the processors to plan ahead.

Marv Eberle agrees with that sentiment, noting the importance of differentiating
from US and Brazilian production. And he sees grower expertise as a big advantage.
"We can do a good job, we have the equipment, we have the people here that
can understand and handle it, and as Ontario growers, we have to look at that
as an ongoing option," says Eberle of Country Farm Seeds. In the end, the
issue becomes less of a matter of the premium amount, and more the impact on
the bottom line. "Whether it's $1.00, $1.50 or whether it's $2.50, those
added premiums help put extra profit into our pockets and helps the industry.
We have to look at profit per acre, now more than ever before."

Building relationships the other side to success
That growers are recognizing their role as part of a team is an important step
for the long-term health for IP soybeans. The commitment to forging relationships
is similar to the mind-set required for no-till farming; it requires a determined
effort over a number of years to make it work, says John O'Brien, food products
manager with Thompsons of Blenheim, Ontario.

"The players that are in that side of the business recognize that it's
not going to be an opportunity and then get out, it's a year after year supply
of beans to specific markets," says O'Brien. "The only issue we're
running into is the weather adversity we've had through the past few years and
spreading our risk out into different areas just to hedge ourselves."

Happily for O'Brien and Thompsons, their reputation, even during the tough
times, has been solid enough that their customers stay with them. "Those
are the kind of customers that Ontario needs and wants, and we've got a lot
of them as a group of processors here in Ontario, and I think we're building
a very good reputation," says O'Brien. "It's all about relationships,
and the more the growers understand where their soybeans go, and who buys them
and what they make them into, the better relationships we develop."

Reasons for staying with IP vary
Marty Huzevka is another processor who sees positive things ahead for IP soybeans,
in spite of any short-term difficulties. As marketing manager for grains and
oilseeds at the Hensall District Co-op, as well as current chair of the Canadian
Soybean Export Association, Huzevka agrees with Eberle's assessment of grower
expertise and O'Brien's mention of 'getting closer' to end-users as the key
to maintaining a healthy IP soybean market. But he admits size may play a role.

"It's possible that larger acreage producers may have a more difficult
time of meeting the demands of an IP soybean program than producers that are
smaller in size, due to there being some extra work involved," says Huzevka.
He adds there are other reasons growers move to any one particular system, citing
premiums, building relationships or moving one step closer to the consumer that
buys the end products. It can even boil down to a reflection of personal principles,
where a grower refuses to pay user fees to a large corporation or as an attempt
to buy-in on a branded product or system, similar to organics.

"As a processor and marketer of these soybeans, there are certainly value
added issues on processing to world export markets," says Huzevka. "Producers,
processors and exporters of the Canadian Soybean Export Association would argue
that you can actually attach a value to that, and that value is attached to
not only the premiums themselves, but also the strong basis levels for crusher
soybean, as a result of some export.

"It could be argued that there's an added value of 15 or 20 cents a bushel
just in raising the basis level of all soybeans, not just food-grade,"
explains Huzevka. "Finally, there are the jobs, technology investment and
international market exposure that opens the door for other opportunities for
other food products. The food-grade soybean industry can really add breadth
to the agricultural sector in Canada."

Soybeans the healthy choice
Food-grade soybeans continue to be the key to IP markets, but will
there come a day when demand shifts from overseas markets to one established
in North America? Would that improve the market for IP?

"If we believed the popular press for the last 30 years, we would believe
that has already happened," says Rob Templeman, field agronomist with Pioneer
Hi-Bred. Although there has been growth in the Ontario market, it has come at
a relatively slow pace. "From a health standpoint, all the benefits and
value of soy have been put out there time and again, yet the greatest demand
for Ontario soybeans by far is the commercial crush market."

North American society is not a big help in that regard, either, notes Templeman.
The desire to live and eat healthy is purported to be on the rise, but it is
often overridden by a demand for convenience and the perception that healthy
eating is a form of punishment. Tradition also plays a role. "We can be
a health conscious society, but we still have a taste requirement that we grew
up with, and it's difficult to change that," says Templeman. "We want
to do what's best for us, but we still want to do what we think we like."

Price, quality and perceived health benefits all blend together in the decision-making
process at the grocery store or the market. What is missing is the 'all for
one' mentality of healthy eating together with healthy living. Incorporating
soy gradually into North American diets is one way to improve the overall health
of consumers. Adding a glass or two of soy milk, suggests Templeman, is certainly
a step in the right direction.

The interesting trend on soy milk, states Marty Huzevka, soybean and grain
manager of Hensall District Co-op, is that it is one of the fastest growing
products in the US. "Right now, it's estimated that two to 2.5 percent
of the US dairy market is soy milk, and that's huge," says Huzevka, adding
that energy bars are another food product that is a large-scale user of white
hilum soybeans. "There are roughly 300 million people there, and for 2.5
percent penetration, that's pretty good for a dairy market, and they're expecting
that to grow in the future."

The Bottom Line
We believe the idea of growing IP crops will continue to grow, whether
it is corn for ethanol or all the different types of wheat we now grow.
All of our non-Roundup Ready soybeans are IP. What is important for us
is that we contract price per bushel FOB on our farm, and this must compete
with the crusher who is short of crop and offering a premium for crush
beans. The premium for the IP variety must also be substantial enough
to compare to higher yielding non-IP varieties.

There's no point doing 25 acres of IP. We grow IP soybeans in large enough
acreage to warrant the extra work: that means 200 to 300 acres of one
type, so we spread the combine clean-out work over more crop. We also
either have the storage capacity to handle the whole crop or know a local
elevator that can. Lennie Aarts, Wainfleet, Ontario.