Research studies are providing evidence that growing flax after canola is a poor choice. The reason is that flax is a highly mycorrhizae-dependent crop that relies on these little beneficial fungi to help with crop nutrition. Growing flax after canola, a non-host for mycorrhizae, can mean lower phosphorus (P), copper (Cu) and zinc (Zn) uptake, poorer shoot growth, and ultimately lower yields.

Arbuscular mycorrhizal fungi include about 150 species and colonize on the roots of various host crops. The fungi produce tree-like structures called arbuscules in and on the roots. This provides a high contact area for the plant to deliver sugar to the fungus in exchange for P.

Some crops are non-hosts, including Brassicacea (canola, mustards), Chenopodiaceae (quinoa, beets, Swiss chard, spinach), and the Caryophyllaceae (carnation) families. Summerfallowing will also reduce the quantity of fungal inoculum in the soil. Growing flax after these crops or fallow can reduce mycorrhizal colonization on the flax roots.

Wheat is a mycorrhizal host, and a good choice for crops like flax and corn that are highly dependent on mycorrhizal fungi for early season root growth and nutrient uptake.

Karamanos was involved in a wheat-flax versus canola-flax research study near Brandon, Man., along with Dr. Terence McGonigle, associate professor and chair, department of biology at Brandon University. The researchers tested the hypothesis that mycorrhizal colonization and shoot P acquisition of flax, along with shoot biomass, would be reduced when flax follows canola, compared to a previous crop of wheat. The results were reported in Communications in Soil Science and Plant Analysis, 42:2134-2142, 2011.

In 2007, the plots had been used for 200 replicated canola variety trials. Wheat was planted as a border crop between each two-metre by five-metre canola plot. In 2008, the entire area was seeded to CDC Bethune flax with 60 pounds N, and five pounds P per acre as seed-placed MAP. Flax roots were sampled July 15 from a 16-blocked comparison between canola stubble and wheat stubble, and assessed for root biomass and nutrient uptake.

Early season shoot growth was significantly greater in flax on wheat stubble than flax on the canola stubble, even though root growth was similar on both stubble types. Mycorrhizal colonization on flax roots was relatively high with significantly higher colonization on wheat stubble. This increased mycorrhizal growth was attributed to greater uptake of Cu, P and Zn when flax was grown after wheat.

These results are consistent with another study by Marcia Monreal with Agriculture and Agri-Food Canada (AAFC) at the Brandon Research Centre in the early 2000s. She compared the effects of two tillage systems, two preceding wheat and canola crops, and the use of P fertilizer on arbuscular mycorrhizal fungi (AMF) colonization, root biomass and root size of flax at the Brandon Research Centre Farm under conventional tillage and the Manitoba Zero Tillage Research Association Farm site under reduced tillage. Phosphorus was applied to the flax crop as MAP at rates of 0 or 10 pounds P per acre.

Monreal reported in her research article (Can. J. Plant Sci. (2011) 91: 315-324) that flax root biomass was larger in all site-years when flax was grown after wheat. In three of four site years, mycorrhizal colonization of the flax roots was increased following a wheat crop compared to following canola. When flax received P fertilizer or residual P from previous crops, AMF colonization on the roots was lowered at the site that was historically managed under conventional tillage.

Overall, net revenue of flax was higher, and income variability lower when flax was grown after wheat rather than canola and under reduced tillage. Net revenue of flax was approximately $13 to $38 per acre higher when grown on wheat stubble compared to canola, regardless of tillage system or location.

“What we’ve seen from many different studies is that growing flax after canola is a no-no. You will have reduced early season growth and P uptake, and that usually translates into a loss of yield,” says Karamanos. 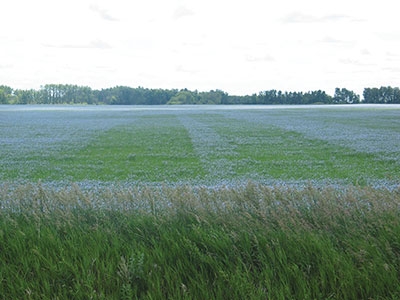 Lack of mycorrhizal colonization on flax roots was clearly evident on the canola stubble plots. Research studies are providing evidence that growing flax after canola is a poor choice.