Another weed control tool bites the dust. A field in southwest Saskatchewan was confirmed to have Group 4-resistant kochia in the fall of 2015. The durum field had been sprayed with OcTTain herbicide (2,4-D and fluroxypyr; both Group 4 active ingredients) and it had little effect on the kochia population. 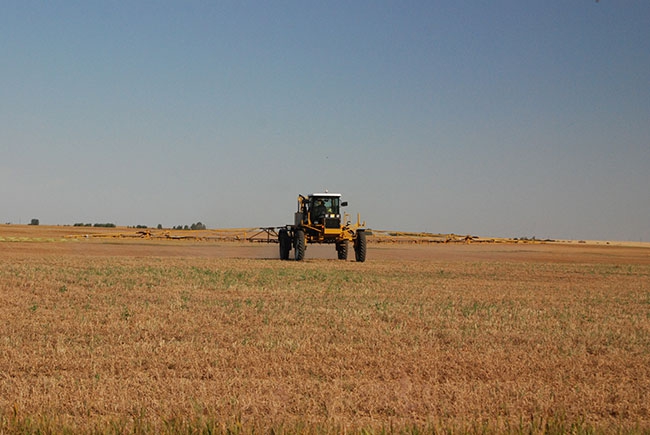 The confimration of Group 2 + 4-resistant kochia means the loss of another herbicide tool. Another weed control tool bites the dust.

“With most fields in Western Canada, Group 4 herbicides have been used off and on over the past 70 years. I’m actually surprised we haven’t seen more cases. I suspect there is a lot more out there and we’ll see more cases confirmed in the next few years,” says Hugh Beckie, a weed scientist with Agriculture and Agri-Food Canada (AAFC) in Saskatoon who has been tracking kochia herbicide resistance across the Prairies.

Kochia is predisposed to develop herbicide resistance because it produces 15,000 to 25,000 seeds per plant and spreads extensively when blown on the wind. As a result, when a kochia plant is selected for resistance, it can quickly multiply and spread the resistance to other fields. Additionally, kochia outcrosses and pollen flow from plant to plant can further spread resistance.

The first instance of a confirmed resistant kochia case in North America was in a Kansas cornfield in 1976. The resistance was to atrazine – a Group 5 herbicide. Since then, 54 unique cases of kochia herbicide resistance have been identified, according to the International Survey of Herbicide Resistant Weeds. Those cases include Group 2 resistance in Western Canada going back as far as 1988. Today, all Prairie kochia weed populations are thought to be resistant to Group 2 herbicides. Additionally, kochia populations have developed resistance to multiple modes of action, including Group 2 + 9 (glyphosate). This was first identified in Alberta and has since been observed across the Prairies. Currently, Group 4 herbicides are fifth overall in the world rankings for the number of unique cases of herbicide resistance. At press time, 25 dicot and 8 monocot weeds with resistance to Group 4 herbicides had been identified.

Beckie is also testing two additional kochia populations from southern Alberta, which are suspected of being Group 4-resistant. These were found in fields in the County of Warner, where the first Group 2 + 9-resistant kochia was confirmed.

“The Group 2 + 4 population from southern Saskatchewan wasn’t glyphosate-resistant, but kochia is known for developing multiple site resistance and three-site resistance with glyphosate would be a concern,” Beckie says.

Beckie expects the Group 4-resistant kochia population from Saskatchewan would include cross-resistance to all classes of chemistry within the group. Group 4 active ingredients are known as synthetic auxins and include the phenoxies (2,4-D, MCPA, MCPB and mecoprop), benzoic acid (dicamba), pyridine carboxylic acid (clopyralid, fluroxypyr, picloram and triclopyr), quinoline carboxylic acid (quinclorac), and benazolin-ethyl. Beckie has an undergraduate student looking at cross-resistance in the Group 2 + 4-resistant population to see if it is indeed resistant to all classes of Group 4 active ingredients.

The confimration of Group 2 + 4-resistant kochia means the loss of another herbicide tool.

What to do
For growers who do not currently have Group 4-resistant kochia, Beckie’s advice is to utilize all standard recommendations, including using cultural and chemical control methods, to slow down the development of resistance. For control with herbicides before seeding, there are at least seven different herbicide groups that can be used in long-term herbicide rotations and in tank mixes, and four different groups that can be used in chemfallow – depending on the subsequent crop to be planted. Layer a pre-seed or pre-emergent herbicide with a different in-crop herbicide to further change up the selection pressure.

The bigger danger is losing the effectiveness of Group 4 herbicides in-crop on fields with Group 2 + 4 resistance. Of the 45 herbicides registered for control of kochia, all but nine include a Group 4 herbicide. However, tank-mix combinations that have a Group 4 in the mix might still control Group 4-resistant kochia because of the other active ingredient(s). For example, Pardner (bromoxynil) controls kochia on its own, and the amount of bromoxynil in Buctril M – a tank-mix of MCPA (Group 4) plus bromoxynil (Group 6) – might still control kochia if no antagonism occurs between MCPA and bromoxynil, since the amount of bromoxynil in Buctril M is the same as the rates recommended for Pardner.

Another caution is that a sub-optimal dose of a non-Group 4 active ingredient in a tank mix might actually speed the development of resistance to the alternative active ingredient if it is not providing a lethal dose on its own. For example, a herbicide with a Group 4 and 6 herbicide would control a Group 2-resistant kochia. However, for a Group 2 + 4-resistant biotype, the same herbicide might not control the weed because the Group 4 active is ineffective and the Group 6 has a sub-optimal rate to control the kochia. The best advice is to ask the herbicide manufacturer if their product would control Group 2 + 4-resistant kochia.

For in-crop herbicide rotations to control Group 2 + 4-resistant kochia, look for alternative groups that include the following herbicides and check labels for registered crops:

“Once you take Group 4 away as an option for controlling kochia, that’s another nail in the coffin for herbicides,” Beckie says.

A key strategy for keeping kochia under control is to stay on top of the weed problem through scouting. Weed escapes should be treated suspiciously, and if possible, the escaped kochia should be mown or cultivated before it sets seed. Beckie says kochia can survive in the soil for about one year, so preventing seed set can help manage the weed.

Information from Manitoba Agriculture also indicates delayed seeding and pre-seeding tillage or pre-seeding herbicides will help reduce in-crop weed densities since kochia germinates early in the spring. Crop rotations that use a combination of early and late sown crops and alternating seeding dates on individual fields will help keep kochia populations in check. Weed survey results in Manitoba also indicate zero-till fields are less favourable for kochia germination and densities are much lower than on conventionally tilled fields.

Beckie says that if a farmer suspects kochia escapes are Group 4- or Group 9-resistant, AAFC will test the suspicious populations free of charge to confirm resistance.

“This is another wake-up call for growers to not take for granted the future effectiveness of their favourite herbicides and try to follow best management practices to mitigate herbicide resistance,” Beckie says.