September 8, 2014
By Canola Council of Canada

Sept. 8, 2014 - Excess moisture has caused some canola to sprout inside pods. There is not much growers can do to avoid this, and combining early is not an option — given the storage risk.

The Canadian Grain Commission's Official Grain Grading Guide defines sprouted canola as those seeds having a ruptured seed coat in combination with either a rootlet that protrudes beyond the normal contour of the seed or distinct swelling of the seed. Seeds having a ruptured seed coat that are otherwise sound are only considered sprouted when found in combination with seeds meeting the definition of sprouted. 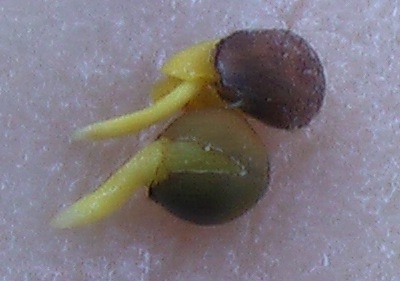 Sprouted canola seed. Excess moisture has caused some canola to sprout inside pods.