Features Biodiesel Bioenergy
Getting value out of lower-grade canola

“In the short term, we’re working with others to generate a market for low-quality canola. So if a grower has a bin that overheats or a canola field that gets caught under a snow bank, we can at least redeem some value for that material for them by having an industry that is receptive to frost-damaged, heated and field-damaged materials,” explains Dr. Martin Reaney, research chair of Lipid Quality and Utilization at the University of Saskatchewan.

“In the longer run, we are identifying added value in the crop. In my experience, when somebody discovers an added value opportunity, it doesn’t typically result in a much higher price. But it does tend to stabilize the price. We’re introducing technology that may lead to a more stable price by adding another market to the meal and oil markets for the canola crop.”

Reaney has been investigating opportunities for using damaged canola seed for many years, including research when he was at Agriculture and Agri-Food Canada and now at the University of Saskatchewan. He and his research team have tackled the topic from a number of angles.

“When we first went into making canola into biofuels, [Canada] didn’t have the subsidies that were available in the United States and Europe. So we needed to take advantage of low-cost materials. For that purpose, we looked at seed that had been damaged either in the field or in storage,” he says.

“First we studied how to get the oil out of the seed. A lot of damaged seed has lost its structure, and it is not efficiently pressed to recover oil. So we developed more efficient pressing and extraction technology.”

Another early issue was that sources of damaged canola seed tend to be scattered all over the place, with amounts varying from year to year and place to place. Reaney says, “So we came up with the hub-and-spoke approach, to collect and bring the seed to some common locations for processing.”

The researchers also improved the process of converting the oil into biodiesel. “Damaged seed produces quite low-quality oil with lots of different problems. So we had to figure out a very robust way of making biodiesel so that, no matter what, the biofuel would have good quality,” notes Reaney.

Although canola biodiesel has advantages over biodiesel made from products like tallow and soybean oil, its properties are still somewhat different from petroleum-based diesel. So Reaney’s research group has developed processing technologies to improve such canola biodiesel properties as oxidative stability and low-temperature performance. He notes, “Low-temperature performance hasn’t turned out to be a big problem with canola mainly because when you blend it with other diesel fuel, like with a Canadian winter diesel fuel, it takes on the performance of that fuel.”

One of the overarching themes of Reaney’s research is to develop techniques that are practical on the Prairies. “A lot of researchers will grab the latest technology, a ‘super-’ this or ‘ultra-’ that, and the equipment is very expensive. In my experience, western Canadian biofuel producers usually can’t use that kind of technology,” he explains. “So we look for the best biofuel properties – we can’t ever compromise on the properties of the material – that can be produced with rather conventional, simple, low-cost equipment.”

Along with using damaged seed to reduce input costs, the researchers have been exploring other ways to improve the economics of biodiesel production. “[For example,] the catalyst for making biodiesel is actually quite expensive. We came up with a technology to lower the cost of that catalyst to about one-third of its original cost,” he says.

They are also developing a novel approach that turns a biodiesel processing waste into a valuable byproduct. “We developed a special lithium-based catalyst for biodiesel production, and we’ve developed a method of converting the leftover catalyst into lithium grease [a heavy-duty, long-lasting grease],” says Reaney. “Lithium grease is broadly used all over the world – in heavy equipment, trains, planes, automobiles.” They are now scaling up the process for use at a commercial scale.

Another current project involves making biofuels that are “drop-in” fuels. “Right now, biodiesel still has to be handled somewhat differently than [petroleum-based] diesel,” he explains. “But there are approaches to make it into a drop-in fuel. A drop-in fuel means it would have exactly the properties of diesel. You would be able to use it as is and it would require no special handling.”

As well, the researchers are exploring motor oil technology that uses vegetable oils. “We have been working on trying to get the stability of these oils high enough for use in motor oil applications. We think we have some really good technology for this goal as well.”

Reaney’s research on industrial uses for lower-grade canola has been supported by many agencies over the years such as Saskatchewan’s Agriculture Development Fund, Agriculture and Agri-Food Canada, and the Natural Sciences and Engineering Research Council of Canada. His research also has received support from such agencies as GreenCentre Canada and from such companies as Milligan Biofuels Inc. (formerly Milligan Biotech).

Opportunities and challenges
The Canadian biodiesel industry has encountered a number of hurdles and has not grown as quickly as some people had hoped it would. For instance, the industry is still working towards meeting the increased demand arising from the Canadian government’s requirement for a minimum of two per cent renewable fuel content in diesel fuel. This requirement came into effect in 2011.

According to Reaney, one of several issues hampering the Canadian biofuel industry has been the contentious food-versus-fuel debate, about the issue of using farmland to produce biofuel feedstocks. Reaney’s group was ahead of the curve on this issue by focusing on the use of non-food grade canola to make biodiesel. But beyond that, his opinion is that food production and fuel production are not mutually exclusive.

“It isn’t food versus fuel; it is food and fuel,” he says. “All these biofuel industries actually produce more food than would have been produced had they not entered the biofuel industry, because they are always producing a side stream that is edible. So I think that issue has been addressed by the biofuels industry, but I don’t know whether the public has caught up.”

Milligan Biofuels, based at Foam Lake, Sask., is one of the companies managing to weather the ups and downs of the Canadian biodiesel industry. Along with making its own improvements to biodiesel production processes, the company has adopted some of the advances made by Reaney’s research group.

“Their research proved the ability to produce consistent biodiesel from damaged seed, and that’s our business model,” says Len Anderson, director of sales and marketing for Milligan Biofuels. The company manufactures and sells biodiesel and biodiesel byproducts, and provides canola meal and feed oil to the animal feed sector. All of its products are made from non-food grade canola, including green, wet, heated or spring-threshed canola.

He outlines how this type of market for damaged canola helps growers. “It’s giving them an opportunity for a local, reliable, year-round market. It creates a significant value for damaged canola because we aren’t just using it for cattle feed; we’re using the oil to produce biodiesel. So we’re probably on the higher end as far as value created for damaged seed. It creates value for what was once almost a waste product, is what it boils down to.” 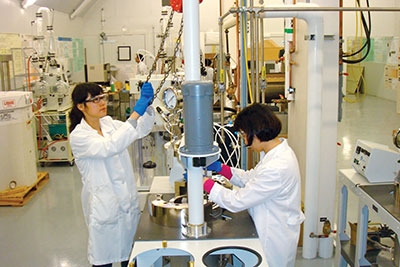