Features Agronomy Insect Pests
Getting to know the zebra caterpillar

Here’s another insect from the “zoo” to watch for when scouting crops – zebra caterpillar was seen in a few canola and flax fields across the Prairies in 2012. Spraying was reported in canola fields near Portage la Prairie and Dauphin, Manitoba, in 2012 – the second year that damage has been reported in Manitoba. Damage was also observed in southeast and south-central regions of Saskatchewan and a few areas in Alberta. Is this the next pest to watch for?

“We don’t have a lot of information on zebra caterpillar because it hasn’t historically been a pest on the Prairies,” says John Gavloski, entomologist with Manitoba Agriculture, Food and Rural Initiatives (MAFRI). “I have only seen it at high levels in patches in a few fields, but some agronomists have reported higher levels of larvae throughout a field, which could result in economic damage.”

The most striking feature of zebra caterpillar, and the reason it stands out more than other caterpillars on canola, is its black and yellow longitudinal stripes. The underside and legs are light red-brown or yellow and the head is reddish-brown. The larvae are 35 to 40 millimetres long when mature.

“They are very noticeable in the field, and because the adults lay eggs in clusters, the larvae can be concentrated in patches in the field,” says Gavloski.

Zebra caterpillar was previously named Ceramica picta, but the current taxonomic name is Melanchra picta. It overwinters as pupae in the soil and adults emerge in the spring and lay eggs in clusters on the leaves of host plants. The young larvae feed together in a group initially, and later separate and feed singly. The larvae feed for four to six weeks before pupating in the soil. The adult is a relatively nondescript brownish moth with a wingspan of approximately two centimetres. On the Prairies, there may be two generations in one year.

Larvae will feed on many crop and non-crop plants including canola, flax, alfalfa, clover, sugar beets, and some vegetable and tree crops. The second generation may feed on canola pods.

No major cause for concern
In most cases, zebra caterpillar has only caused random and patchy damage. Gavloski has helped with scouting diagnostics in a few fields, and found very patchy infestations, usually around the edge of the field. The damage can be quite significant in the patches, because the larvae emerge from clusters of eggs.

“I’ve seen some patches with a lot of defoliation where the plants are chewed up really badly, but they have just been small patches in the field,” says Gavloski. “I don’t want to downplay the potential for more widespread damage in a field, because these cases have been reported, but generally zebra caterpillar hasn’t been an economic problem.”

For farmers and agronomists who do find zebra caterpillar when scouting fields, Gavloski recommends scouting the entire field to determine the extent of the feeding problem. No economic thresholds have been established for feeding damage on vegetative parts. If larvae are feeding on pods, thresholds may be similar to those of bertha armyworm. This is speculation as well, however, as no studies have been done in Western Canada on the biology and feeding habits of zebra caterpillar – it could eat more or less than bertha armyworm.

An additional challenge is that no pesticide is registered for control of zebra caterpillar on the Prairies.

The reason zebra caterpillar is only a random, sporadic pest is not understood. Despite the fact that it can overwinter here, something must be keeping the populations under control. Parasites and viral diseases may be one reason, and why insecticides should be avoided if at all possible. In the 1990s, a study of zebra caterpillar collected from blueberries in British Columbia found that 50 percent were parasitized by a braconid wasp called Microplitis mamestrae. An ichneumonid wasp has also been found to parasitize zebra caterpillars in Eastern Canada.

“My advice is if you find zebra caterpillar, scout the entire field.  Don’t just make a decision based on a few patches at the edge of a field,” says Gavloski. 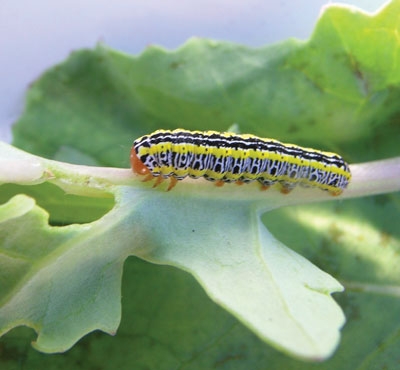 The most striking feature of zebra caterpillar is its black and yellow longitudinal stripes Zebra caterpillar was seen in a few canola and flax fields across the Prairies in 2012.