Features Agronomy Insect Pests
Scouting for cutworms: how to identify and what you should know

A Canola Agronomic Research Program (CARP) project on cutworms is now completed, resulting in "The Cutworm Booklet," which will help producers identify and control cutworm species, and give them a better understanding of the role of natural enemies in the control of the various cutworm species. 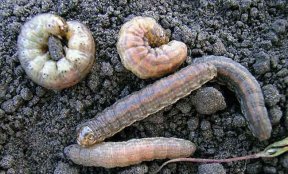 Cutworms are generally present in most cropland every year, but occasionally will reach economically damaging levels. From 2007 through 2010, they were a serious insect pest in canola, and have been relatively common in the past few years. Floate says climate cycles are the likely cause of periods of outbreaks, which occur sporadically every five to 30 years. Successive dry years increase the potential for outbreaks of pale western cutworm, whereas successive wet years increase the potential for outbreaks of black cutworm.

Otani says current agronomic practices including continuous cropping and tillage may also be affecting cutworm incidence and distribution. She says tillage and summerfallow were historically used to reduce cutworm numbers by eliminating green vegetation for cutworm moths to lay their eggs on or near. However, continuous cropping and protecting the soil surface from erosion now outweighs the use of these practices to manage cutworms.

“Continuous cropping is advantageous to growers but it also provides cutworms and other herbivores with a continuous host plant. There are cutworms that prefer grasses and cereals whereas some prefer broadleaves. Yet again, some cutworm species include all these plants in their diet so, from larva to moth, continuously cropped land can offer preferred host plants for moths to lay their eggs on or near in the late summer and into the fall, and then the spring seeding offers new plants to feed upon,” Otani says.

The larval stage causes damage, and information from the cutworm booklet describes the three general feeding habits. “Subterranean cutworms feed almost exclusively underground: larvae cut the main stem of young plants, but otherwise are not usually seen. The larvae of ‘above-ground’ cutworms will feed on foliage and older larvae may cut the main stem of young plants at or near the soil surface, normally feeding at night and hiding in the soil during the day. The larvae of ‘climbing’ cutworms climb up plants to feed on the foliage without necessarily damaging the main stem. These feeding differences affect the effectiveness of insecticide applications.”

According to Otani, some cutworm species are relatively more subterranean during their larval development and are difficult to control using registered, foliar-applied insecticides, as they remain underground and are less likely to come into contact with the active ingredient. “In contrast, many species of cutworms will climb onto foliage at dusk to feed. These cutworms are sometimes referred to as ‘climbing cutworms’ and growers can target their scouting to early evening or sometimes early in the morning to estimate larval densities and compare to existing nominal thresholds that vary by crop,” she notes.

Nominal economic thresholds have been developed for cutworms, and are posted on Manitoba Agriculture, Food and Rural Development’s website in the “Cutworms in Field Crops” section. For example, in canola, a suggested nominal threshold is 25 to 30 per cent stand reduction. In wheat, oats and barley, the nominal threshold for redbacked and army cutworms is five to six per square metre.

Floate says identifying cutworm species is possible for growers and agronomists, although it takes a certain level of expertise. He says the time of year, geographic region, and type of crop being damaged (cereal versus broadleaf) are indicators of what the species is likely to be, but do not provide absolute identification.

“Occasionally we see cases where the larvae of crane flies are misidentified as cutworms. Plus there are many non-pest species of cutworms that are generally present in low numbers, so proper identification is important,” Floate says.

The Cutworm Booklet has detailed charts of lifecycles for each cutworm pest species, showing when the damaging larval stage is present, type of feeding characteristic, species characteristics and larval photos.

In an effort to aid in-field scouting, the Prairie Pest Monitoring Network (PPMN) is currently featuring cutworm species as part of the PPMN Blog’s Insect of the Week.

“The key thing is to use insecticides only when required, and limit the use of insecticides to affected areas,” Floate says. “Maintaining a healthy population of natural enemies is akin to having an unpaid standing army on call ready and willing to feed on pest species when outbreaks arrive.”

Another way to help conserve natural enemies is to maintain field margins in an uncultivated state with a diversity of grass and flowering species. According to Floate, this provides the natural enemies with a place to overwinter, along with a ready food supply. Flowering plants provide adult parasitoids with a source of nectar that might not be present in the crop. Non-pest insects that feed on plants in the field margin provide predacious insects with a source of food when there are no pest insects in the crop.

This article originally appeared in the June 2016 issue of Top Crop Manager West.