Features Fertilizer Seed & Chemical
Getting the most from black gold

The T-shirt for sale in a coffee shop near Dr. Shabtai Bittman’s office in Agassiz, British Columbia, reads: “Welcome to manure country. You won’t forget our dairy air.” Though the smell associated with using livestock waste on crop fields is less than appealing, there’s a reason farmers who have easy access to swine, chicken and cattle manure consider it “black gold.” That said, maximizing the accessibility of manure’s nutrients to crops while minimizing its environmental downsides is not as simple as spreading it and forgetting it.

Enter Bittman and his colleague, Derek Hunt, researchers with Agriculture and Agri-Food Canada (AAFC), whose innovative manure application methods are designed to get the most benefit and least harm from nature’s nutrient recycling.

“Everyone recognizes that there are many attributes to manure that are beneficial for crop use. But, at the same time, it is not an easy fit, not a perfect fit. In addition to it being bulky, hard to transport and obviously smelly, there are aspects inherent to manure that make it more difficult to use than commercial fertilizer, both because of the form of the nutrients and their concentration,” explains Bittman.

The biggest challenge with using manure as fertilizer is the fact that the ratio of nutrients is not ideal. Most crops need a nitrogen-to-phosphorus ratio of between eight- and 10-to-one. Typical liquid manure from swine or dairy operations is generally in the range of three- or four-to-one. As such, if one applies this manure in a quantity to get the right amount of nitrogen, the crop will receive far too much phosphorus.
Over-applying phosphorus is a very big problem environmentally. When phosphorus enters a water system it can cause a rapid increase in the amount of algae present: a deadly process called eutrophication. When the algae dies and sinks, the bacteria that decompose it use up all the oxygen in the deepest parts of lakes, making these formerly rich habitats unable to support life.

“Eutrophication is contamination you can see: the lakes turn greeny-brown and murky; the beaches get covered in slimy, rotting algae,” says Bittman. “The element limiting algae in water is phosphorus, not nitrogen, so added phosphorus can cause a devastating algae bloom.”

“We’re seeing it most prominently in Lake Winnipeg, but it’s also a major issue in the Great Lakes, especially in Lake Erie, in the Mississippi Delta, most major water bodies that are close to agriculture and close to urban centers, especially ones that still allow people to fertilize with phosphorus-containing fertilizers.”

Two options exist to ensure manure applied to crops does not contain far too much phosphorus. The first is to apply less manure and add a commercial fertilizer to bulk up the nitrogen: a less than ideal solution when manure is free or cheap.

The second – Bittman and Hunt’s field of study – is to manipulate the nitrogen and phosphorus components of manure. This manipulation is surprisingly easy, since the concentration of nutrients varies widely based on the thickness of the manure itself: left to naturally settle, the more solid portion has a two- or three-to-one ratio of nitrogen to phosphorus, while the liquid portion is in the seven- or eight-to-one range, near ideal for most crops.

After reviewing multiple trials of various manure separating technologies, Bittman and Hunt’s team determined filtration systems, no matter how high-tech, are unable to effectively filter tiny phosphorus particles. Rather, the best, most cost-effective separating system is ultra-low tech: nothing more than a holding tank or waste lagoon system that allows settling of solids and decanting of liquids.

The liquid portion can be applied directly to the majority of crops, including hay crops where the nitrogen recovery is superior to raw manure. But the thicker, phosphorus rich sludge is certainly not a useless waste product, Bittman and Hunt’s research shows.

A corn crop requires a very high level of phosphorus very early in the growing season. Even in phosphorus rich soils, corn farmers typically apply 25 to 30 pounds of commercial, granular phosphorus per acre near the seed at planting because tiny corn seedlings require immediate access to a ready supply of this nutrient.

Top dressing a corn crop with manure is too unwieldy, too wet, and not located close enough to a corn seed to be effective. However, Bittman and Hunt’s research shows that a thicker, sludgier, phosphorus heavy manure injected at corn row spacing solves all of the operational challenges and provides 100 per cent of the phosphorus required by young corn seedlings.

“Even though the sludge is thicker than the component you’ve decanted off, it’s still 93 per cent water. What we found is if you inject it with a commercial injector at the same spacing as you’ll plant (2.5 feet or 75 cms), then let it soak in for a couple days so it’s not too sticky, and then plant the corn as close as you can to the manure band, you’ll get the best response from the corn,” he explains.

“For this method of concentrating the phosphorus in manure and then injecting it for corn crops, we are first in the world doing it as far as I know. We’ve had a lot of interest from (researchers in) other parts of the world,” he says.

Injecting manure into the soil also solves a second challenge of manure application. When manure is top– dressed onto crop fields, the ammonium (plant available nitrogen) is prone to volatilization–turning into gas–and dissipating into the atmosphere, both reducing the usable nitrogen in the soil and causing an environmental nightmare. Called the Nitrogen Cascade, a single molecule of ammonium that vaporizes into ammonia gas will have complex and long-term environmental consequences: it will be directly toxic to plants that it contacts, can attach to fine particles in the air and become an air quality issue, will fall to the ground with rain and cause acidification, can convert to nitrous oxide, and may run off into rivers and streams, contaminating watercourses.

Bittman and Hunt’s trials show that liquid manure injected into soil has a lower likelihood of volatilization because the negatively charged soil ions bonds with the positively charged ammonium ions, effectively “sticking” the nitrogen to the soil.

While this research is promising, he knows more work is necessary.

“With any new technology, you have to be careful that though you might be making one thing better, you’re not also making something else worse,” says Bittman. “Every improvement is incremental. You have to figure out how to minimize issues; to make improvements that are practical and that don’t cause additional problems.

For example, when manure is injected into soil, the narrow band of manure creates an ideal wet, anaerobic condition for nitrous oxide release as well as the leaching of nitrate into ground water. While his research suggests the problem is minimized by injecting the sludge over injecting whole manure, Bittman continues to look for creative ways to reduce the secondary environmental effects. In Denmark, he says, farmers have begun to apply sulphuric acid to manure in the barns, in storage, and/or in manure applicators to lower the pH of manure, thereby making it less prone to change from (solid) ammonium to (gaseous) ammonia.

“In Denmark, if you have 50 pigs and you want 60 pigs, you cannot increase total emissions, so you have to introduce measures on your farm to reduce average emissions per pig. They are very aggressive about it there, and it’s certainly something for us to keep our eyes on, based on the rate of success they’ve had.”

Bittman hopes research funding is renewed so the team may continue this work beyond 2015. Currently, one farmer has begun on-farm testing of the technique.

“Like anything else, you have to see if it catches on; see if it works on farm as well as it has in our plots. Sometimes, you know right away that people won’t get past certain hurdles, be they cost, equipment, time, etc. But in this case, there are no obvious impediments to doing this on farm. So far, so good.” 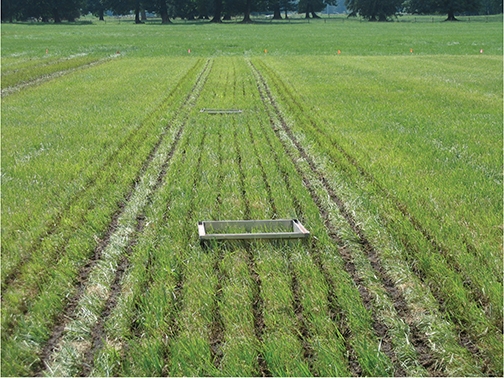 Grass treated with a band of separated liquid fraction. The T-shirt for sale in a coffee shop near Dr. Shabtai Bittman’s office in Agassiz