Uncategorized Fertilizer Fertility and Nutrients Soil
Getting something to grow

When AC Saltlander green wheatgrass was released in 2006, farmers had a new tool to use on saline soils. Its salinity tolerance was comparable to tall wheatgrass and forage quality comparable to smooth brome grass. Now, researchers are trying to improve the performance of AC Saltlander through the addition of organic amendments to the soil.

“Unproductive salt-affected areas continue to persist and expand on the Prairies while the demand for arable land continues to grow,” says soil scientist Jeff Schoenau at the University of Saskatchewan. “Getting something of value to grow on these saline areas can help manage the problem.”

AC Saltlander is a hybrid between Eurasian bluebunch, wheatgrass and quackgrass collected from Turkey. It is the result of collaboration between Agriculture and Agri-Food Canada at Swift Current and the United States Department of Agriculture. While successful in its own right, Schoenau and graduate student Paul Hrycyk wanted to see if adding leonardite, humic acid or composted steer manure could improve AC Saltlander yield and nutrition, and what effect these amendments had on soil organic carbon and salinity.

Leonardite is the overburden found above coal deposits. Humic acid is an organic compound that, in this case, was derived from leonardite.

“The saline area had higher levels of N, P, K and S because it hadn’t produced much crop but had still been fertilized for many years,” Schoenau says.

“I was surprised at first, but some weeds had grown there for a lot of years. Foxtail barley has a dense rooting system, so maybe there was some significant below ground carbon addition over the years,” Schoenau says.

In the spring of 2018, yield on the saline sites was catching up, and was about one-half of the non-saline site. Schoenau says there was a trend for the organic amendments to increase yield on both sites, but it was not statistically significant. 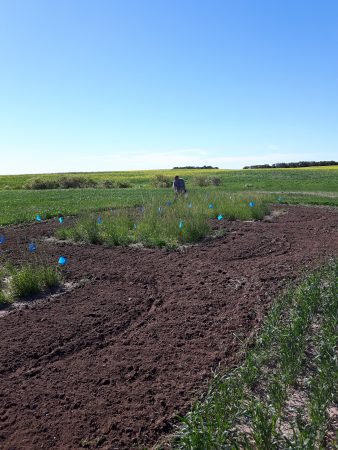 Nutrient uptake was also measured in above-ground biomass of AC Saltlander. Schoenau says there were no differences in uptake of N, P, Na and Ca between organic amendment treatments, or between saline and non-saline soils. “There was pretty negligible uptake of the Ca and Na salt cations.”

Leonardite significantly improved soil organic carbon compared to the other amendments and the control, on both sites by the spring of 2018. Schoenau explains that leonardite is slow to decompose, resulting in higher soil organic carbon in the top four inches (10 cm) of the soil.

The organic amendments did not significantly change pH or EC values in the 24 inch (60 cm) depth.

Masters student Gravel Wang is carrying on the research for another two years in 2020 and 2021. A new site was added in 2020 at Clavet, Sask., with salt-tolerant alfalfa alone and in a mix with grass, and added organic amendment treatments. Isotopes will be used to compare the relative contribution that groundwater makes versus rainfall to the overall water used by the forage species in the saline and non-saline sites. It is suspected that salt-tolerant forages can make good use of shallow groundwater and accumulated nutrients in the salt affected areas of the field.

“What we’ve found so far is that getting a palatable forage established with roots down to water table is making salt-affected land productive again,” Schoenau says. “Seeding areas to salt-tolerant wheatgrass and applying a large amount of a high carbon content amendment like leonardite are two approaches to increase the soil organic carbon over a short time period.”