Fusarium head blight (FHB) is a fungal disease that affects wheat, barley, oats, rye, triticale, corn and a range of grasses. From an irrigation standpoint, wheat, barley and corn are the three crops of greatest concern.

In southern Alberta, Fusarium graminearum is frequently the species found in greatest abundance and is of greatest concern on irrigated land. Although F. Graminearum is only one of many species of Fusarium, it is considered the most important in irrigated crop production in southern Alberta due to the effects on grain yield, grain quality and ability to produce several different toxins.

Pathogens that cause FHB can overwinter in plant residue, in soil and on seed. Fungal spores form on infested crop residue and can spread short distances from one field to another by wind. When cereal crops are in the flowering growth stage, open florets are susceptible to infection by spores being distributed by wind. If rain or irrigation occurs during the flowering stage, the humid conditions in the copy canopy can result in even higher levels of infection and crop damage.

Farmers with increasing concerns of FHB with irrigated cereals should consider a two-year break between cereal crops on the same land. Oilseed, pulse, special crops (potatoes and sugar beets) or alfalfa are all good crop options for a good irrigated crop rotation.

Management practices can reduce FHB risk
When a cereal crop is grown on irrigated land, the newest and most FHB tolerant variety should be selected. Seed should be tested for FHB and must be completely free of FHB. Seeding rates for cereal crops should be at the high end of optimum to increase the number of main stems and reduce tiller formation. Higher seeding rates tend to result in more uniform flowering and shorten the period of flowering (see Alberta Agriculture Agdex 100/561-2 for more information on seeding rates of irrigated cereals). Application of a registered fungicide for FHB suppression should also be considered.

Irrigation management is a very important strategy for FHB control. Pivot irrigation is used on more than 76 per cent of the irrigated land in Alberta, which allows light frequent water application. Wheel move and gravity irrigation make up the remaining amount. Pivot irrigation is excellent for optimizing irrigated crop production, but irrigating during flowering of cereal crops will increase the potential infection of FHB by increasing humidity in the crop canopy. For this reason, irrigation should be avoided during the period of flowering to reduce humid conditions in the crop canopy.

It is important to know when flowering begins and ends for wheat and barley as each flowers at slightly different stages. For barley, flowering usually starts when the head is still in the boot and about two to three centimetres of the awn have emerged from the boot. Flowering is completed when heads have fully emerged from the boot (heads have cleared the flag leaf collar). Irrigation of barley should stop when awns have emerged from the boot on the main stem and not be started again until heads are fully emerged on tillers. Ideally, this will be about eight to 10 days, but careful field observation is essential.

Wheat typically begins to flower about three days after the head has fully emerged (heads have cleared the flag leaf collar) and lasts for about three to five days. Heads on tillers will emerge a few days after the main stem and will also flower for three to five days. Therefore, irrigation of wheat needs to be terminated for eight to 10 days depending on field conditions, and the timing of main stem and tiller head emergence.

Assessing water availability
Wheat and barley are at peak water use at the flowering growth stage, using between six and eight millimetres per day of water, depending on evapotranspiration conditions including maximum air temperature and wind speed. Termination of irrigation at peak water use means irrigation must be carefully managed leading up to and after flowering.

Over 10 days, a cereal crop will use 60 to 80 millimetres (2.4 to 3.1 inches) of water. Therefore, it is important to know the water holding capacities of the soils on your land. Table 1 provides the amounts of total available soil water for five major soil texture classes and the amount of readily available water at field capacity in the zero- to 50-centimetre and zero- to 100-centimetre depths. Wheat and barley typically will root down to 100 centimetres and effectively draw moisture down to 100 centimetres by the time of heading. Under ideal conditions at heading, cereal crops will take up 70 per cent of their water requirements between zero and 50 centimetres and take up 30 per cent of their water requirements between the 50- to 100-centimetre depth. To prevent yield loss, only 40 per cent of available water should be used, and then irrigation is required to raise soil moisture back to field capacity.

A cereal crop grown on a loamy sand or sandy loam textured soil would likely run out of readily available water over 10 days before irrigation is re-started, if only 40 per cent of water is used as the safe depletion. On sandy soils, it is difficult to go 10 days without irrigation and not suffer some loss in yield. Normally, wheat and barley grown on loam or clay loam soils can go 10 days without significantly impacting yield. 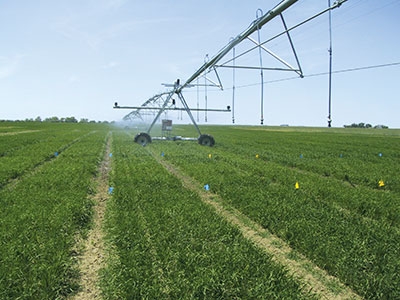