Fusarium head blight (FHB) on canaryseed is on the radar for growers and researchers.  Although it was only recently confirmed at the University of Saskatchewan by Paulina Cholango Martinez and Randy Kutcher, Kevin Hursh, executive director of the Canaryseed Development Commission of Saskatchewan, says that Fusarium has been showing up in seed tested for germination when a disease screening was also conducted. 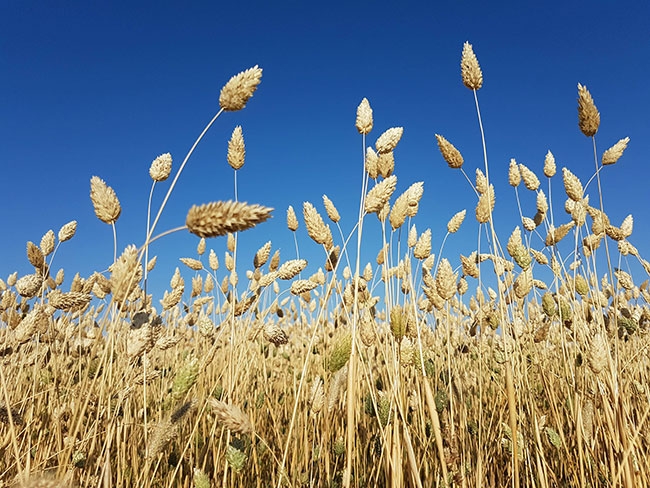 “A seed grower on our board flagged the concern a number of years ago. For most producers, it hasn’t been a yield issue with the exception of 2016, which was exceptionally wet throughout the growing season,” Hursh says.

In canaryseed, the main concern to date appears to be yield loss under very favourable disease conditions. The Canadian Grain Commission does not regulate canaryseed so there are no grades or grading factors established. Quality is determined by buyer preference. Hursh says he has not heard of any problems regarding mycotoxins in canaryseed for birdseed, but says it is important to know more as the product gradually moves into the human food market. He is currently collecting samples for Cholango Martinez to test for mycotoxins.

The first confirmed case of FHB on canaryseed was in 2014 by Cholango Martinez, Kutcher and colleagues. In August 2014 in Saskatchewan, symptoms of FHB were observed in commercial annual canaryseed fields. The panicles appeared bleached and prematurely ripened. Twenty-one canaryseed fields were surveyed from five crop districts across the province of Saskatchewan. Twenty heads from each field were collected and analyzed for FHB. The average incidence of seed infected by F. graminearum was found to be 28 per cent.

In 2016, Hursh says canaryseed on his own farm suffered some yield loss. He had canaryseed tested and the Fusarium level was high. “One lab identified quite a bit of F. graminearum but another lab indicated it was not the dominant species.”

Kutcher and Cholango Martinez are now investigating the impact of FHB on canaryseed and possible management solutions. Disease surveys of canaryseed conducted by Cholango Martinez and colleagues at the Crop Development Centre at the University of Saskatchewan confirm that Fusarium was high in 2016, although less than in 2015. The prevalence of Fusarium species on seeds of canaryseed was 64 per cent in 2016. By comparison, the prevalence of Fusarium species on canaryseed was 88 per cent in 2015.

The drier growing conditions of 2017 resulted in greatly reduced Fusarium infection. Cholango Martinez reports in the Canadian Plant Disease Survey for 2017 that Fusarium seed infection was detected in only 19 per cent of canaryseed fields surveyed. She says the only Fusarium spp. identified in 2017 was F. poae.

“The absence of F. avenaceum, F. graminearum and F. equiseti found in the canary seed in previous years, indicates that each of these species has different environmental requirements, which influence its establishment and development on canary seed crops, during the field season. Also, it seems that F. poae is more likely to survive high temperatures and low precipitation than F. graminearum, which is more frequent in wet years,” reports Cholango Martinez in her paper in the Canadian Plant Disease Survey.

No known control strategies
Currently, no fungicides are registered for FHB control in canaryseed. Cholango Martinez says that fungicide field trials to manage leaf mottle (not Fusarium) during 2014 and 2015 found no effect on yield. However, infection levels of Fusarium on canaryseed were less than 12 per cent in those years in her trials. Cholango Martinez and Kutcher started a new round of fungicide trials in 2017 that target Fusarium infection, and will carry on in 2018 and 2019.

“For FHB control in canaryseed we do not know appropriate strategies at this time,” Cholango Martinez says. “Rotation of canaryseed with other less susceptible hosts like pulses and canola is likely to be beneficial, but untested.”

Hursh says that for now, canaryseed growers really can’t do much about Fusarium.  Typically in canaryseed, leaf mottle has been the concern, and propiconazole fungicide is registered for control. For Fusarium, Hursh says much is yet to be investigated.

“We need to know more and we need to get more registered fungicides, but this all takes time.”