Although oats are less susceptible than other cereals to Fusarium head blight (FHB), this disease can impact oat yield and quality when conditions strongly favour the disease – as they did on the Prairies in 2016. So, researchers are working to better understand FHB in oat, to develop oat varieties with even stronger FHB resistance, and to help ensure the grain remains safe for humans and livestock. 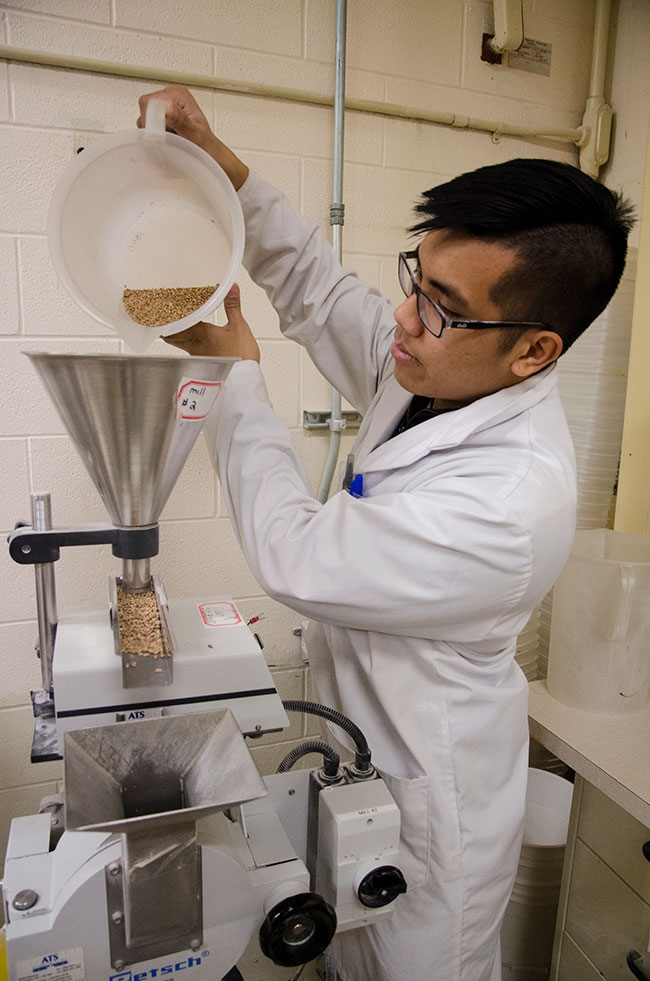 The Grain Research Lab is analyzing oat samples to determine if Fusarium fungi and their toxins are present. Although oats are less susceptible than other cereals to Fusarium head blight (FHB)

FHB in oats presents some intriguing challenges for researchers. Oat breeder Jennifer Mitchell Fetch calls FHB a “sly foe” because the symptoms in oats aren’t usually easy to see, making disease levels hard to evaluate in the field. Another complexity is that several different Fusarium species can cause FHB in Prairie oat fields. Furthermore, these species have the potential to produce fungal toxins, and these mycotoxins differ from species to species.

Surveying oat fields
Researchers conduct annual surveys to track FHB in commercial oat crops on the eastern Prairies. The surveys started in 2002 in Manitoba and in 2004 in Saskatchewan. Since 2014, the Manitoba surveys have been led by Xiben Wang, a cereal pathologist with Agriculture and Agri-Food Canada (AAFC) at Morden, Man. His team looks for visual symptoms of FHB, such as orange-pink or other discolouration of the oat spikelets in randomly selected oat fields, and analyzes oat samples from these fields using such techniques as qPCR (quantitative polymerase chain reaction) to identify and quantify the different Fusarium species.

He notes, “Fusarium poae is the most common species, followed by Fusarium graminearum and then Fusarium sporotrichioides in third place.” Other detected species include F. avenaceum and F. equiseti.

University of Saskatchewan researchers are currently leading the annual surveys for FHB in Saskatchewan oat crops. Fusarium is commonly detected in the surveyed fields. For example, Fusarium-infected kernels were found in 22 out of 31 oat fields in 2015, and 18 out of 30 fields in 2016. F. poae is usually the most commonly detected species, followed by either F. graminearum or F. avenaceum. Other species detected in recent years include F. culmorum, F. sporotrichioides and F. equiseti.

Surveying along the grain handling chain
Sheryl Tittlemier, a research scientist at the Canadian Grain Commission (CGC), is studying Fusarium species in oats as part of a larger project on several problem fungi in western Canadian oats.

For the disease surveillance work, Tittlemier and her collaborators are analyzing oat samples obtained from 2014 to 2017. The samples are from three types of sources along the grain handling chain. “One source is the CGC’s Harvest Sample Program; these samples are voluntarily submitted by producers in the envelopes that are sent out every harvest. We’re also getting samples from some processing facilities; these samples represent weekly composites of oat deliveries to a facility. And then we’re getting samples from some grain handling companies; these samples are also composites and represent the oats being loaded onto a train for shipment,” says Tittlemier, who is head of the Trace Organics and Trace Elements Analysis section of the CGC’s Grain Research Laboratory. The number of samples ranged from about 114 in 2014 to more than 170 in 2017. Tittlemier’s team is analyzing the 2017 samples now.

She notes, “Generally – and we see this with wheat as well – we tend to see Fusarium more in the eastern part of the Prairies. But we also see differences from year-to-year due to different growing conditions.”

The oat samples are analyzed for more than 20 different mycotoxins. Each Fusarium species produces various toxins, including deoxynivalenol (DON), nivalenol and zearalenone. DON, which is mainly produced by F. graminearum, is the most well-known Fusarium toxin; safe limits have been established for DON in food and feed.

When the sample analysis is completed, Tittlemier and her team will analyze all the data, looking at the trends over the years and the geographical patterns, to create a complete picture of their findings.

The findings from the project’s processing component differ somewhat from the results of previous research by Mitchell Fetch in the early 2000s. Mitchell Fetch says, “We found that dehulling – removing the hull from the oats – removed at least half of the DON. Then, when we steamed them and kilned them, like a miller would do before flaking the oats or grinding them into flour, the DON disappeared below any detectable level with the technology we had at that time.”

Tittlemier’s original approach was to conduct the processing analysis in 2015, examining the effects of the different processing steps from dehulling, to heating, to milling. However, the 2015 oat samples had very low mycotoxin concentrations to begin with, and after dehulling, no mycotoxins could be detected on the oats. So, the team couldn’t proceed with the other processing steps.

With the much higher FHB presence on the Prairies in 2016, Tittlemier decided to see if they could evaluate the effects of the later processing steps using some 2016 samples. “However, we still found that the bulk of mycotoxins were removed during hulling; for example, about 90 per cent of the DON concentration was removed in the hull,” she says.

Tittlemier’s project is funded by the Prairie Oat Growers Association (POGA) and the Saskatchewan Ministry of Agriculture through the Canada-Saskatchewan Growing Forward 2 bilateral agreement. The project is also supported by the CGC, and involves the Grain Research Lab’s microbiology and milling research groups, along with Tittlemier’s section. She also notes, “Without producers sending in samples to the Harvest Sample Program, and the processing facilities and the grain handling companies that have been supplying us with samples, we wouldn’t be able to do this work.”

Breeding for better resistance
One of the objectives in the oat breeding program lead by Mitchell Fetch is to develop lines that are less susceptible to Fusarium infection. Ideally, she would like to develop varieties that are immune to FHB and don’t produce any Fusarium toxins. “I’m not sure that will be possible because we have not found anything yet that is completely immune to Fusarium head blight, but hope is always there,” says Mitchell Fetch, a research scientist with AAFC at Brandon.

To screen for FHB resistance, Mitchell Fetch’s research group grows the early generation lines in a Fusarium oat nursery, which is run by Wang. He says, “We use corn infected with different Fusarium graminearum isolates including both 3-ADON and 15-ADON chemotypes [the two main types of F. graminearum on the Prairies]. In this nursery, we are also assessing FHB resistance in the lines that are in the western co-op trials and some of the commercial varieties available on the market.”

Fusarium symptoms are very hard to use for assessing disease levels in oats, so the researchers currently rate the lines based on the DON levels in the grain, which are determined using ELISA (enzyme-linked immunosorbent assay) tests. However, the Fusarium nursery and the ELISA testing are expensive and labour intensive.  “We are trying to see whether we could do some greenhouse test looking at seedling resistance, and also if we could do some Petri plate tests looking at the reactions of the plants to different Fusarium species and then seeing whether we can correlate the reactions to the plants’ resistance,” Wang says.

Understanding the disease
Wang is conducting several studies to better understand FHB in oats. Some of this research involves characterising the disease complex in oats. “From our field surveys, we find the FHB complex affecting oat is much more diverse than FHB on wheat,” Wang notes. “It is quite common to find more than one Fusarium species infecting a single oat plant.” So, his team is working on identifying which species are found together, determining the plant’s mechanism for resisting each species, studying the ability of each species to produce toxins in oats, and exploring if the different species are interacting with each other in ways that might affect the disease’s impacts in oats.

He adds that, at present, not much is known about F. poae, F. sporotrichioides and F. avenaceum and their impact, virulence and toxigenic potential in oats, even though F. poae in particular is common in Prairie oat fields.

A few years ago, Mitchell Fetch crossed adapted Prairie oat lines with lines from Norway that were reported to be more resistant to FHB in Norway’s growing conditions. From those crosses, she created inbred lines that she hopes can be used in studies to increase understanding of Fusarium infection and toxin production in oats.

Wang’s studies on Fusarium in oats are funded by AAFC, and POGA, partly through POGA’s funding for Mitchell Fetch’s oat breeding program. Summing up the current situation, Wang says “oat growers should be aware that FHB is pretty common [especially in the eastern Prairies  in recent years], but there is no reason to panic. We have pretty good resistance in the majority of our commercial lines, and FHB severity in oat is relatively low compared to the levels in wheat and barley. And even if FHB infection should become an issue in oat, research shows dehulling gets rid of most of the toxins.”

What should oat growers do when conditions favour FHB? “In a high disease pressure year, you can definitely see the disease in oats. In those years, your management practices would be similar to practices for managing Fusarium in the other cereals,” says Holly Derksen, field crop pathologist with Manitoba Agriculture. These practices include applying a fungicide at anthesis, choosing oat varieties with good FHB resistance, and using a crop rotation in which cereals are followed by broadleafs.

Another recommendation from Derksen is to get your oat seed tested if you are saving seed from a growing season with high disease pressure. “Because Fusarium is not as easy to see in oats, you might assume you don’t have the disease. But if you are saving that seed and you don’t normally use a seed treatment for oats, then you might have problem with germination,” she explains.

“If you have Fusarium in your other cereal crops, then it may be in your oats as well. So, get the oat seed tested to find out whether you have a Fusarium issue. After the 2016 year, I saw oat seedlots with as high as 20 per cent Fusarium infection. If you don’t normally treat your oat seed with a seed treatment, you may want to consider it in that type of situation.”