When it comes to fighting Fusarium graminearum, our crops may soon have some new tiny but powerful allies. Research by Manish Raizada at the University of Guelph is providing the foundation for commercializing some anti-Fusarium bacteria as biocontrol products. As well, a student in his lab discovered an amazing mechanism that a bacterial strain called M6 uses to stop the fungus dead in its tracks. 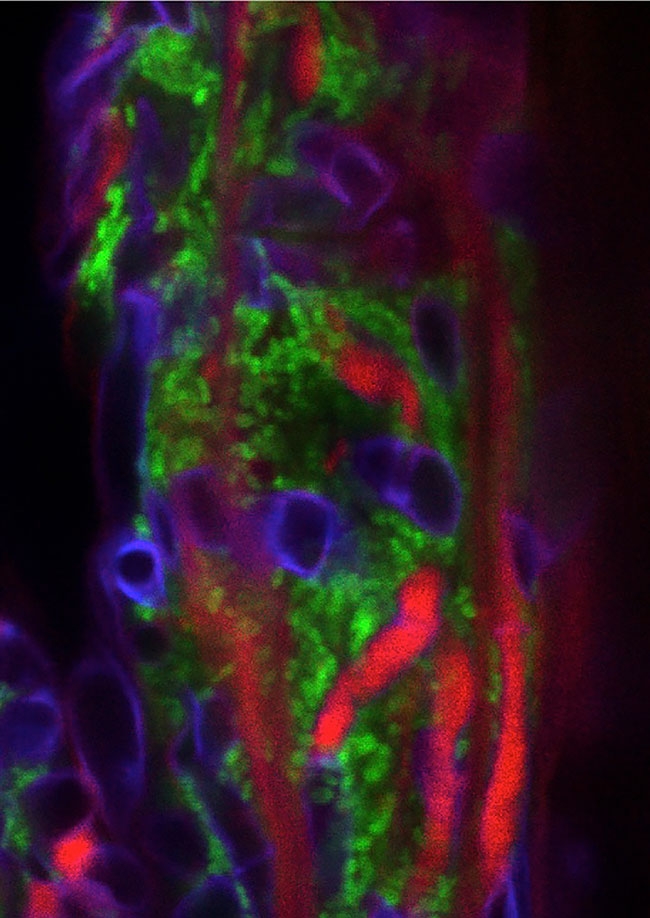 These anti-Fusarium bacteria are all endophytes – microbes that live inside plants without causing disease. For about a decade, Raizada’s research group has been isolating and examining endophytes. Studies by his group and other scientists have shown endophytes can confer diverse benefits to their plant hosts. Depending on the specific endophyte and the specific host, these benefits may include things like suppression of plant pathogens, protection against insect pests, improved access to soil nutrients, enhanced plant growth and better drought tolerance.

Much of Raizada’s endophyte research focuses on controlling Fusarium graminearum. This fungal pathogen is the main cause of Fusarium head blight (FHB) in wheat and also causes Gibberella ear rot in corn. (The fungus’s sexual stage is called Gibberella zeae.)

The ‘lasagna’ defence
The M6 research at Raizada’s lab has produced some fascinating results. “The endophyte M6 originally was isolated from a landrace [a traditional variety] of finger millet. This ancient cereal crop is widely grown by subsistence farmers in Africa and South Asia,” notes Raizada, a professor in the university’s department of plant agriculture. “Finger millet appears to be tolerant to Fusarium graminearum. In the seeds and other tissues of finger millet, you will find spores of Fusarium graminearum and other Fusarium species, but the crop doesn’t develop the disease.”

Raizada and his lab were the first researchers to isolate endophytes from finger millet – a crop that is reported to be resistant to many pathogens. M6 is a strain of an Enterobacter species that has shown the ability to control F. graminearum.

Walaa Mousa, who was a PhD student at the time, examined M6’s mode of action against the fungus. Understanding an endophyte’s mode of action can be helpful with things like obtaining regulatory approval to use the endophyte as a biocontrol product. Plus, in the case of M6, the mode of action has turned out to be really cool.

Because M6 was isolated from the roots of finger millet, Mousa chose to study the interaction between the pathogen and the endophyte in the plant’s roots. She used confocal microscopy to examine this interaction in a test tube.

“In confocal microscopy, you can look at living cells in real time, without killing them; you can look inside the tissue without dissecting it,” Raizada explains. “Walaa was able to track the endophyte by inserting a gene coding for green fluorescent protein that enables the endophyte to give off a green light. The Fusarium graminearum was tracked with a stain that gave off purple light.”

From close observation of this colourful combination, Mousa saw that when the fungus wasn’t present, M6 lived quietly inside the root at very low levels.

“So there is a layer of the endophyte right on top of the root’s surface and then this root hair-endophyte lasagna. Walaa observed that it was very difficult for the pathogen to enter this lasagna barrier. On the few occasions when the strands of fungus were able to enter the lasagna, they were literally trapped. They were surrounded by the endophyte and root hairs and then killed.”

To figure out how this killing occurred, Mousa developed a set of differential lines of the endophyte. She created a mutation in every gene of the endophyte, with each line having a different single-gene mutation, for a total of about 3,000 lines. Then she tested each of those lines to see which ones no longer had the ability to suppress Fusarium graminearum. She found 10 of them.

“Fusarium species secrete an antibiotic called fusaric acid that kills bacteria that try to kill the fungus. One of the things fusaric acid does is suppress phenazine synthesis. But one of the M6 genes that Walaa identified actually pumps the fusaric acid out of the cell, so M6 is resistant to what Fusarium is trying to do to kill the endophyte,” Raizada says.

These findings provide some evidence in support of the researchers’ hypothesis: “The endophyte and the pathogen coexisted in the same plant host for a long period of time and that there has been an arms race between these two microbes. Finger millet was first domesticated in East Africa [about 7,000 years ago], and there are reports that Fusarium may have also originated in Africa much earlier than finger millet. So we hypothesized that finger millet may be tolerant to Fusarium because it has endophytes that co-evolved to suppress the fungus,” Raizada says.

He adds, “Subsistence farmers are typically the ones growing finger millet in Africa and South Asia. We think that, as they have been selecting for healthy plants and healthy seeds, they may have inadvertently selected for M6.”

Even though M6 is a root endophyte, it was very effective in reducing DON on corn silks and on wheat heads in the greenhouse trials. Raizada suspects M6 is using a similar mode of action – forming a barrier against the fungus on the surface of the silks or heads and then using phenazine and its other natural fungicides to kill the fungus.

As a next step, Raizada is hoping to start a larger study to see if M6 is in five other finger millet landraces from different parts of East Africa, and to determine where in the plant the endophyte occurs.

He notes, “If subsistence farmers over generations have selected for this endophyte, then the endophyte has to be either residing in the soil or transmitted in the seed.”

Endophyte field trials lead to promising results
In another study, Shearer has been conducting field trials with five bacterial endophytes applied to corn and wheat. In the earlier greenhouse trials, these five endophytes were found to be the most effective ones for controlling Fusarium graminearum and reducing DON. The best of the five endophytes resulted in a 97 per cent reduction in DON.

One of the five endophytes was M6, isolated from finger millet. The other four were isolated from plants in the corn family, including wild relatives, ancient landraces and a modern corn variety.

Shearer conducted small-plot trials at Ridgetown, Ont., in 2015 and 2016, in collaboration with Limay-Rios. The wheat trial ran into a couple of difficulties and will need to be repeated, but the corn trials produced some promising results.

The corn trials were done under a misting system to try to sustain a high level of Fusarium. The treatments involved each endophyte individually and all five endophytes mixed together, and compared four application methods.

One method was to apply the endophytes as a seed coating before planting. Another method involved imbedding the endophytes in gel beads that were then broadcast over the soil around planting time. The other two methods involved in-crop spraying at different timings, either early or late in the window during which Fusarium graminearum enters corn through the silks. The trial also included a fungicide treatment (Proline) at silking and a check treatment with no endophyte and no fungicide applications.

In addition, Shearer conducted a trial with field-scale strips in 2016, using the most promising endophyte from year 1 of the small-plot trials. The strip trials compared the four different endophyte application methods, along with the relevant check treatments.

In the small-plot and field-strip trials, the researchers collected data on such factors as grain yield, Fusarium graminearum symptoms in the plants, and levels of DON and other Fusarium mycotoxins in the seeds.

Shearer is currently processing the data from 2016. Based on the results so far, the endophytes were not effective for the very susceptible hybrid. Raizada says, “The background levels of Fusarium were astronomically high in this hybrid, and we think the pathogen just overwhelmed the endophyte. But keep in mind that farmers would probably not choose such a hybrid.”

Focusing on the moderately susceptible hybrid, the results are quite promising. “In year 1 of the small-plot trial, two of the five endophytes were winners and three were not. By ‘winner,’ I mean they were convincingly a winner in all the replicated plots. These two winners very significantly outperformed the fungicide,” Raizada says.

“As expected, the general trend was that the endophytes’ performance in the field was not as good as in the greenhouse [because of field factors like variable weather conditions and much more competition with other microbes in the environment]. Even so, the best winner is spectacular compared to what we have currently [for controlling Gibberella ear rot].”

Based on the data analysis so far, each endophyte seemed to have its own optimal application method. Mixing all five endophytes together did not improve Fusarium control.

In the strip trial, the endophyte spray reduced DON by 65 per cent. “That is a really exciting result for a single spray application at silking,” Raizada says. “And keep in mind that this is the first time we’ve done these sorts of trials and there are ways to optimize these applications, like optimizing the spray formulation. So the endophyte might be able to do even better.”

Even though Shearer has not completely finished his analysis, the next stage in this work is already underway.

“We’ve passed along this work to the private sector. The intellectual property was assigned to the University of Guelph, and Guelph has signed a licensing agreement with a well-known seed company,” Raizada explains. “This company will undertake multi-location, multi-year, multi-hybrid field trials. I’m hoping they will test all five endophytes [because the non-winning endophytes may become winners with other hybrids].”

The company will also probably work on things like optimizing product formulations and application methods, evaluating other possible plant benefits from the endophytes in addition to Fusarium control and assessing the potential for integrated management using both fungicides and endophytes.

Raizada and his lab are continuing to work on Fusarium-fighting endophytes. He notes, “We have started a new pipeline of discovery for new endophytes. We have a new strategy that I think will be more effective than what we have done in the past to discover anti-Fusarium endophytes.”