Features Agronomy Diseases
Fungicides are key in dealing with rust

Growers must be ready when the call comes. 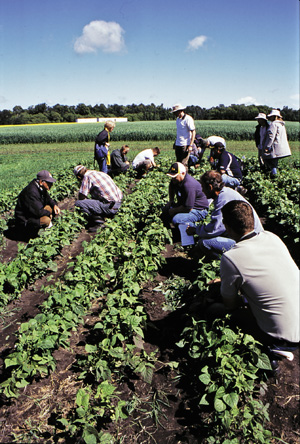 Growers looking for protection from soybean rust have some good news to hold
on to, amid all the uncertainty they are facing in 2005. According to Albert
Tenuta, field crop plant pathologist with the Ontario Ministry of Agriculture
and Food in Ridgetown, four fungicides have been registered for emergency use
for 2005 in answer to requests from extension personnel and researchers. The
four brand names are familiar to growers, including Headline (pyraclostrobin),
Quadris (azoxystrobin), Tilt (propiconazole) and Folicur (tebuconazole).

"They've been broken into two groupings, one is the strobilurins (Headline
and Quadris) which fall under the protective type of fungicides," explains
Tenuta. As the nickname indicates, the strobilurins protect soybeans in their
vegetative or early phases. "A spore lands, starts to develop, to germinate,
tries to infect and get into the plant and if the fungicide is on before that,
it can protect that plant and stop the infection process."

The second grouping is the triazoles, including Tilt and Folicur. Although
the triazoles do little at the early stage, they can help limit colonization
of the tissues. As such, says Tenuta, they are considered to be the curative
agents with some preventative properties. "If you have a one, three or
five percent infection that's started, you can cure that or defend against it,
reduce that damage with the timely application of a triazole," he says.
If the disease progresses to the 10, 15 or 20 percent infection level, Tenuta
says it is likely too late to spray. "At 20 percent, you're not going to
get the economic return on the fungicide that you'd want under normal conditions."

Resistance may be a problem in the near future
Dealing with the disease is a matter of awareness and timely applications as
a preventative measure. But Tenuta points out there is another issue relating
to fungicide applications of which growers should be aware. "The strobilurins
have developed resistance in other parts of the world, on the horticultural
side, because they are a single mode of action," he says. "But we
need to be aware of that, and our recommendation will be to try to mix-up the
chemistries, keep things off balance from a disease standpoint and from a fungus
standpoint."

Another option, he says, is to pursue registration and emergency use for a
combination of fungicides, where growers would have the benefits of applying
the protectant and the curative together. Tenuta also praises representatives
at the federal Pest Management Regulatory Agency, first for their recognition
of the seriousness of the soybean rust issue, and then for fast-tracking the
emergency use registration for the four fungicides.

Edith Lachapelle, who works with the PMRA in Ottawa, acknowledges the potential
damage that soybean rust could bring to Ontario fields. Part of the process
in granting emergency use registration is a consultation with other organizations
or groups that also would benefit from such a process. "And we did recognize
that soybean rust was on a 'top 10' list of bioterrorism diseases in the US,"
explains Lachapelle. "Some diseases, like soybean rust, can cause considerable
damage due to the lack of resistance in the crop, the virulence of the disease
and the absence of control products, which justified the emergency registration."

Further down the road to improved germplasm
As North American growers become more familiar and adept at managing soybean
rust, they may get some help from researchers currently working on incorporating
resistance into soybean germplasm. But progress is slow and Tenuta doubts there
will be anything commercially available in the next five years. "Ultimately,
the best management tool would be to have a combination of good effective resistance,
because there are different races," he says. "Even though there are
resistant lines, there are four different resistance genes out there, but those
genes are not durable against all the different races of soybean rust that have
been tested."

Trials are underway with the USDA soybean germplasm laboratory in Illinois
to assess soybean lines that show tolerance to soybean rust. Evaluation is taking
place in the US and Ontario.

Tenuta says he has seen cases where a private company might successfully test
a resistant variety in Thailand. Yet the same germplasm incorporated into a
Brazilian variety and grown in that country under different environmental conditions,
disease pressures and against different races of soybean rust, might fail. At
present, there may be as many as 20 different races of soybean rust, but Tenuta
concedes that number is not conclusive.

"From year to year, we're going to see variability," he concludes.
"In the southern US, you can almost be assured you're going to see rust
every year at some level and probably significant levels, especially in subsequent
years as it builds up more and gets more of an overwintering foothold in the
south."

The disease has taken some time to develop in the southern US this spring and
unfavourable environmental conditions have limited its development. This is
good news because it should limit the exposure to the disease in Ontario in
2005.