As problems with Fusarium head blight (FHB) continue to increase on the Prairies, so does the need to deal with Fusarium-infested grain and screenings. Preliminary results from a Saskatchewan study are pointing to a possible way to extract value from these wastes while potentially reducing the risk of spreading the disease.

FHB is a difficult to control fungal disease that affects cereal crops. It reduces crop yield and grade, but its most serious impact is the pathogen’s ability to produce mycotoxins that limit the grain’s use for food and livestock feed. Several Fusarium species can cause the disease; the most common one is Fusarium graminearum. Its mycotoxins include deoxynivalenol (DON), the most common mycotoxin associated with FHB.

“The traditional use for Fusarium-damaged grain is to clean it and then, if possible, blend it with uncontaminated grain for animal feed. Although the limits for Fusarium levels in feed are set, there is some nervousness within the livestock industry that if livestock are continually at that maximum level for years and years, there could be some long-term detrimental effects to animal health. So the livestock industry has been pushing for another disposal option to minimize the risk of damage to the animals,” explains Joy Agnew with the Prairie Agricultural Machinery Institute (PAMI), who led this research.

“At present, if the mycotoxin content of the grain or the screenings is too high to be blended for feed, then usually the material is dumped in the bush, a slough, or a hole in a field. But there is a potential risk of spreading Fusarium with dumping.”

She notes the amount of Fusarium-damaged grain has increased substantially in the last few years, adding: “The Canadian Grain Commission [CGC] estimates that a third of all red spring wheat was downgraded due to Fusarium damage in 2014.” And Fusarium levels were even worse in 2016, with downgrading of nearly half of the red spring wheat samples in the CGC’s harvest sample program.

As a result, it is increasingly important to find alternatives to dumping and feed blending.

“A lot of research is being done on preventing Fusarium head blight, but not much is being done on how you can extract value from heavily damaged grain and screenings if your crop gets the disease,” Agnew says. Finding ways to add value to these infested materials would help producers deal with some of the economic impacts of FHB, such as extra fungicide costs, poorer yields, higher seed cleaning costs, lower prices for the grain and limited marketing opportunities.

So Agnew initiated a project to evaluate various disposal options to determine their potential for extracting value from the Fusarium-infested materials and for minimizing the spread of FHB. Saskatchewan’s Agriculture Development Fund, under the federal-provincial-territorial Growing Forward 2 program, funded the project. The CGC provided in-kind services.

The survey found the most common way for the province’s seed cleaners to remove Fusarium-damaged kernels from grain was to use a gravity sorter as part of a mobile cleaning unit. “A gravity sorter separates seeds based on seed density, but research shows this technology misses some Fusarium-damaged kernels and discards a lot of healthy kernels. However, it’s a low-cost, fairly high capacity method. That is why it is so widely employed,” Agnew says.

More sophisticated technologies like optical sorters or near-infrared transmittance (NIT) equipment were not common in Saskatchewan when Agnew’s group conducted the survey in 2016, but since then, she has heard of several more custom grain cleaners who are now offering these technologies.

Agnew explains that optical sorters evaluate individual seeds and eject the ones that do not fall within a predetermined colour spectrum. However, Fusarium-damaged kernels vary in colour from whitish to black or pink, which complicates and slows the sorting process – especially if the grain is highly infested.

NIT involves sending light through individual kernels and measuring the response to determine the chemical characteristics of the kernels, such as protein content, starch content and hardness. Research shows this technology can remove Fusarium-damaged kernels because it can detect their lower protein content and the presence of DON. Agnew’s survey found NIT technology was not readily available to Saskatchewan farmers. However, some seed cleaners were interested in adding the technology to their mobile seed-cleaning units once NIT becomes more economical and has a higher capacity for sorting large amounts of grain.

Agnew expects the capacities of optical and NIT sorters will likely increase as these technologies advance. She notes a common approach at present is to first clean the grain with a gravity sorter and then use one of these other technologies to further sort the grain. However, this process increases the time and cost per bushel for cleaning the grain.

Disposal options
In 2016, Agnew conducted trials to assess three disposal technologies – burning, composting and anaerobic digestion – in terms of their potential to provide an economic return and their effectiveness in killing the fungus.

“We selected burning because, other than dumping, it is probably the most common way of disposing of Fusarium-infested grain. You can burn it in a grain-burning stove or you can pellet it and then burn it in a pellet stove,” she explains.“We looked at anaerobic digestion because some preliminary work in Europe indicated that digestion might deactivate the Fusarium spores, breaking them down in an oxygen-free environment.

“And we looked at composting because it is a pretty standard method of disposing of organic waste and it is easy to incorporate on to the farm.”

All the trials compared wheat samples with high versus low DON levels. In the burning trial, the two types of wheat samples were burned in a grain-burning stove. The CGC analyzed the DON concentrations in the ash. Also, the Alberta Innovates lab in Vegreville assessed the total energy content in the wheat samples.

Surprising results
Based on the results from these trials, anaerobic digestion was the least promising option. It decreased the DON concentration in the digestate, but didn’t eliminate it. On top of that, very little biogas was produced and anaerobic digestion requires special equipment. Overall, this technology does not appear to be practical for farm disposal of Fusarium-infested grain.

In the burning trial, the temperature during burning was estimated to be between 150 C and 300 C. Burning reduced the concentration of DON in the ash but did not eliminate it. Agnew says, “So you can extract energy value from burning Fusarium-damaged grain, but you have to be careful about disposing of the ash because there is still potential for spreading the fungus in that ash.”

Assuming the ash could be properly disposed of, the project’s economic analysis indicated that if highly damaged grain could be purchased for $1 to $3 per bushel, then burning the grain could be a cost-effective way of producing heat compared to traditional fuels.

Composting turned out to be the most promising option. All of the compost samples had undetectable levels of DON, which surprised the researchers. “Composting usually promotes fungal growth. Since Fusarium is a fungus, we hadn’t expected much of an effect,” Agnew says.

She notes, “Our hypothesis is that during the composting process, which heats the compost up to about 60 C to 70 C, it is wet heat and additional microbial activity is happening in the compost pile that somehow eliminates the DON.”

Agnew explains that the cost/benefit of composting strongly depends on the availability of space, a tractor and mixing materials such as manure. “If all of that is available, then composting could be a low-cost option for disposing of Fusarium-infested grain, depending on the availability of a market for the compost and depending on evidence proving that the Fusarium fungus [and not just the DON] is gone from the compost.”

The project’s results show promise for not only extracting value from heavily infested grain but also for minimizing the potential to spread FHB. If Agnew and her CGC colleagues are able to obtain funding to continue this research, the team plans to find a way to directly measure Fusarium levels in compost as part of the research.

“This study revealed some pretty interesting things,” Agnew concludes. “The Canadian Grain Commission was really interested in the results. They are pushing for additional work and to publish the initial results, so we are working with them on that. And the results may also be presented at the World Mycotoxin Forum in 2018 because of the interest in this issue and the fact that no one else has really seen this effect due to composting.” 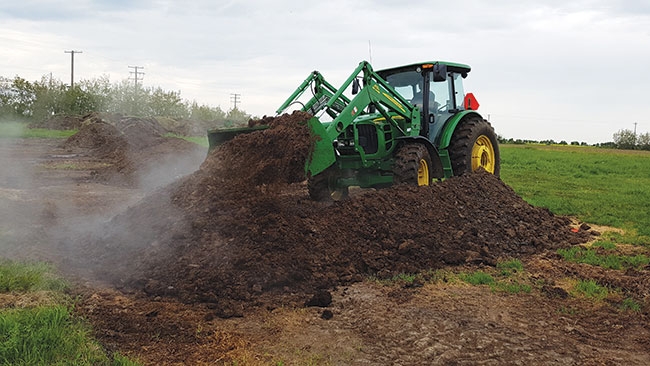 In trials of disposal methods for Fusarium-infested grain FHB is a difficult to control fungal disease that affects cereal crops.