Picture this: on one side of a field is a thriving pea crop, and on the other, a pea crop that is clearly struggling. I recently stumbled upon an image like this shared by Tyler Burns (@windypopfarm) on Twitter. The left side of the pea field was yellowish in colour, recording a yield of 38 bushels per acre (bu/ac), while the right side was green and recorded 80 bu/ac. The left side had grown peas four years prior and the right side – the higher-yielding side – had never grown peas. 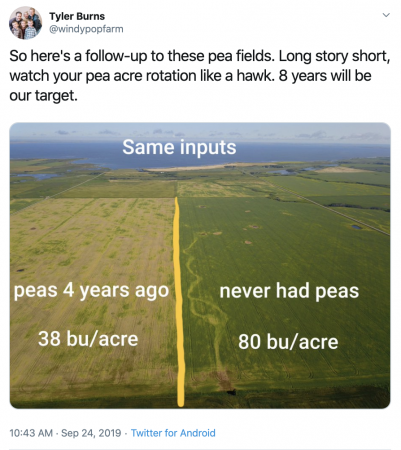 Burns, who farms near Kandahar, Sask., attributes the difference in yield to aphanomyces. A relatively new root rot, there are very limited options available besides a six to eight-year rotation to manage the disease. A four-year rotation is not enough, and like in the above example, can result in a significance yield hit.

The significance of aphanomyces is that there are limited management options available besides rotation – which makes it a good example of why rotation is so important. It’s not as severe as the example of ginseng, which can’t be grown on the same ground again – even 50 years later – because of replant disease. In general, crop rotation is important no matter what disease pressure you’re facing.

There are many factors that contribute to a crop rotation decision: maintaining a level of diversity, nutrient management, herbicide carryover concerns, disease concerns, weed concerns, herbicide-resistance considerations, and so on. For some of these concerns, rotation makes all the difference. But there are other decision factors that come into play that defy facts.

In a Financial Post column entitled, “Why it’s so hard for Canadian farmers to quit growing canola – even amid blockages from China,” author Toban Dyck shared another factor that influences crop rotation: memories. His farm hasn’t grown edible beans since a poor crop “left an indelible impression on the farm’s memory.” He doesn’t downplay the role of science, but instead creates space for “stories, anecdotes, experiences and gut feelings” to enter the rotation discussion.

A wet spring, a late harvest, a good year, a bad year – these memories crop up during rotation planning. Maybe they sway you away from corn or to crops with earlier harvests so you can get your winter wheat in, or maybe they don’t make an impact at all.

This prompted me to ask Burns if he was turned off from growing peas again after a poor crop. He says he isn’t, and that he will continue going peas but with a longer rotation instead. On the other side, there could be many producers out there who will never add a particular crop into the rotation for reasons that go beyond agronomy and instead are grounded in the memory of an unforgettable year.

Experience is an invaluable asset to have when choosing rotations. I hope as you plan ahead, you find the research included in this issue to be helpful. Whether it’s better understanding optimum winter wheat seeding dates to reducing nitrogen losses with cover crops, these stories shouldn’t dictate how you make decisions, but add to your arsenal of resources.