There are so many contributing factors to a successful cropping season. When we launched our inaugural cover photo contest in August, asking readers to send us photos of what represents their “Top Crop,” we left the criteria fairly open-ended in hopes of receiving a good mix of images from farmers across the country. 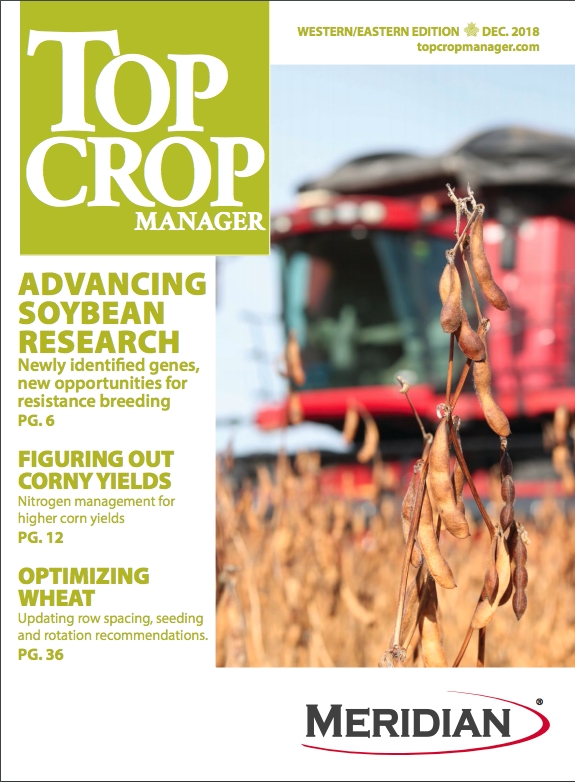 Sonya Toews' winning submission graces the cover of Top Crop Manager's December issue. There are so many contributing factors to a successful cropping season.

It is said a picture is worth 1,000 words, but some of the photos we received rendered me speechless – which doesn’t happen often, as those who know me can attest. To say I am blown away by the quality (and quantity!) of submissions we received is an understatement. Our team poured through nearly 130 photos of fields, crops, pests, equipment, harvesting and the next generation of farmers. After much deliberation, we are happy to announce Sonya Toews of MacGregor, Man., the winner of our cover photo contest.

In her description of the photo, Toews wrote: “The combine patiently waits as a moisture test is done. It’s go time!” This caption – specifically the idea of patiently waiting – so accurately reflects how many producers felt this season, particularly in Western Canada. Toews, who supports the family farm and custom harvesting operation in MacGregor, run by her father-in-law and his three sons, tells us the early snowfall threw everyone for a loop. “We don’t usually encounter snow so early, so this year was a challenge,” she says. “We’d been waiting days and weeks to get going again and everyone was antsy with wanting to get the job done, but we knew we had to wait for the right time.”

Describing the photo, Toews says they had entered the field with the combine to take a sample and had to wait until the moisture reading came back. When it was finally time to get back in action, Toews, who loves taking photos on the farm, snapped the winning picture.

While snow and harsh temperatures stalled Western Canada’s harvest, Ontario’s season was defined by very different challenges. Growers experienced above-average temperatures, high insect pest concerns and lots of mycotoxin risks. But the sentiment behind our winning cover photo – having to wait until conditions were just right – is a common theme in agriculture no matter what part of the country you’re in.

Whether waiting for the right time to plant, spray or harvest, patience is a virtue when it comes to farming. And while you’re waiting, we appreciate you spending your valuable time flipping through our pages and visiting us online. Along with our regular agronomic content in this issue, you’ll also see a small taste of our favourite photo contest submissions inside the magazine. We’ll be sharing more online at Facebook.com/TopCropManager, on Twitter @TopCropMag.

The team at Top Crop Manager wishes to thank Meridian Manufacturing for sponsoring the contest, as well as all those who submitted entries. Watch for more opportunities to have your photo featured on our cover in 2019. In the meantime, thanks for closing out another year with us. Wishing you and yours a joyous holiday season!