It's a lot of work, but it assures the safety of Canadian potatoes. 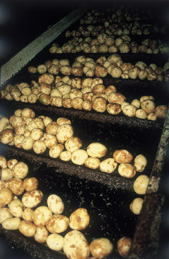 Mad cow, avian flu and tainted water all conjure images of human health being
affected by the food and drink that is consumed. Some health issues are proven
and others only threaten, but it has created a climate of accountability for
the people who produce food and maintain the water supply. Before being hit
with a legislated food safety protocol, the Canadian Horticulture Council developed
one for its many members, including the potato industry. Without waiting, both
the Alberta and New Brunswick potato industries introduced the program in 2004.
Other provinces are expected to get on-board soon because many processors are
insisting their growers follow the protocol.

"Processors are demanding growers adopt this initiative," says Robert
Gareau of Potatoes New Brunswick. "Our growers are working hard to comply
because they believe in it, too." He says that many growers were already
following food safety procedures, but now the process must be documented. Accountability
is the watchword in food safety issues these days no matter what the commodity,
and concerns about bio-terrorism in the US pressures industries shipping food
products south to be accountable if they want to keep that market.

In Alberta, growers were already following a Codes of Practice Growers'
Manual, developed by the Potato Growers of Alberta (PGA), that included
most of the requirements of the Horticulture Council's food safety protocol.
When the council's program neared completion in 2003, the industry decided to
introduce it in 2004. Spurred by the knowledge that the province's five major
processors were looking for some assurances of food safety, the adoption of
one program rather than five was decidedly the route to go, according to PGA
spokesperson Vern Warkentin.

"We sent our technical director and a consultant to every farm to explain
the program," says Warkentin. "They would spend two to three hours
with each grower explaining the protocol." The insistence on understanding
and record keeping is paying off as growers adopt the requirements.

Gareau says the program creates an extra level of management expertise at the
farm level and he explains how his office took the initiative to help growers
through the initial process as well. "We made sure that the program was
fully explained by holding group sessions and meeting one-on-one with growers
to guide them through the manual and worksheets. This also provided for direct
feedback from growers and we have since adjusted the manual and forms that need
to be completed to make them more applicable to their situation."

Much of the protocol involves detailed record keeping of every step of the
production process. Issues such as having hand-washing facilities, shatter-proof
light fixtures, using food-grade grease for equipment, ensuring washroom facilities
in fields and in-storage rodent management are vital to limiting any chance
of contamination of the potato crop.

"This is a very inclusive program that is aimed at protecting food,"
says Warkentin. "We're trying to get all people to change the way they
think about potatoes. On the farm, potatoes are a raw product, but they eventually
become someone's dinner and we must recognize that."

While growers acknowledge the need to adopt this kind of protocol, it has not
come without its costs, which may be why other provinces are slower to adopt
the initiative. The paperwork is daunting for growers with smaller operations
who may not have the staff to perform all the required audits. Initially, ensuring
the safety of storage by replacing light fixtures and other equipment that pose
contamination threats to less perilous mechanisms can be costly. Switching to
food-grade products for shop and equipment or removing equipment maintenance
areas from contact with the crop also adds cost. Larger operations may need
to hire additional staff to maintain all the records. "Time itself is a
cost for growers and this can add to the daily workload," admits Gareau.

Despite the cost and the comprehensive requirements of the protocol, growers
in Alberta and New Brunswick have recognized the time has come for a food safety
program and they are doing their best to comply. "Our growers felt strongly
that this is something they need to do," says Gareau. Warkentin says the
same attitude exists among Alberta growers.

With one year of the program in the books, adjustments will be made to improve
the efficiency of reporting procedures. Follow-up visits will be made to farms
in both provinces to iron out problems. Both Gareau and Warkentin say this is
an evolving process that will adjust as the industry changes. Gareau believes
the key to making the procedure more efficient would be computerized record
keeping, and programs are now being developed to meet the needs of the growing
number of farm managers who are at the cutting edge of computer technology.
Also, changes in the science of potato production may require changes to the
process.

It is apparent to all involved that while ensuring the safety of the food supply
is a necessary initiative, it is also an evolving process. What will not change
is the commitment growers are demonstrating to supporting this protocol. -30-