Irrigation
Food or fuel? How about both?

In the United States, federal mandates to produce more renewable fuels, especially biofuels, have led to a growing debate: Should fuel or food grow on arable land? Recent research shows farmers can successfully, and sustainably, grow both.

Camelina is a member of the mustard family and an emerging biofuel crop. It is well suited as a cover crop in the Midwest. "Finding any annual crop that will survive the [Midwest] winters is pretty difficult," says Gesch, "but winter camelina does that and it has a short enough growing season to allow farmers to grow a second crop after it during the summer."

Additionally, in the upper Midwest, soils need to retain enough rainwater for multiple crops in one growing season. Gesch and his colleagues measured water use of two systems of dual-cropping using camelina and soybean. They compared it with a more typical soybean field at the Swan Lake Research Farm near Morris.

First, researchers planted camelina at the end of September. From there growing methods differed. In double-cropping, soybean enters the field after the camelina harvest in June or July. Relay-cropping, however, overlaps the crops' time. Soybeans grow between rows of camelina in April or May before the camelina plants mature and flower.

The benefits were numerous. Relay-cropping actually used less water than double-cropping the two plants. Camelina plants have shallow roots and a short growing season, which means they don't use much water. "Other cover crops, like rye, use a lot more water than does camelina," says Gesch.

Conveniently, the extra water use during dual-cropping takes place in the spring. "We tend to have an excess of moisture in the soil in the spring from the melting snow pack," says Gesch. Growing camelina as a winter cover crop can help farmers take advantage of spring's extra moisture.

Gesch points out the need for more water use does mean camelina dual-cropping may not be the best option in all areas. "As you get further west and precipitation drops off and soils get lighter with lower water-holding capacity, crop yields may start to go down," says Gesch.

Growing camelina as a winter cover crop can also have other benefits, according to Gesch. "We had greater soybean yields with the relay-cropping system than when double cropping," says Gesch, referencing a previous study. The earlier planting date during relay cropping allows for a longer growing season and contributes to the higher yield, according to Gesch.

In addition, camelina plants flower early in the spring, providing a vital food source for pollinators, like bees, when little else is available to them. As a cover crop, camelina may also help prevent erosion and build soil carbon content. Gesch and his colleagues are working to measure these ecological benefits of dual-cropping.

"We wanted to find alternative crops that could be integrated into the Midwestern corn/soybean cropping system in a sustainable way that also makes economic sense for farmers," says Gesch.

In camelina, they may have found just such a plant. Gesch's study was recently published in Agronomy Journal. 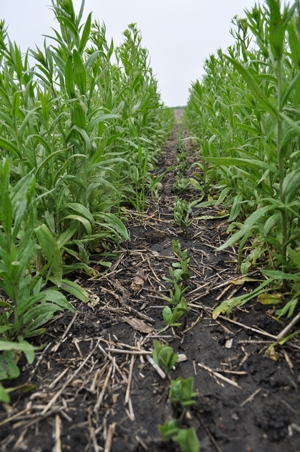 Newly emerged soybean seedlings between rows of camelina in the relay-cropped treatment. Note that the camelina has already begun to flower. Should fuel or food grow on arable land? Recent research shows farmers can successfully
Print this page


Related
Food versus fuel debate rages on
Food instead of fuel
Fuel Food Reality Check
GM corn being developed for fuel, not food