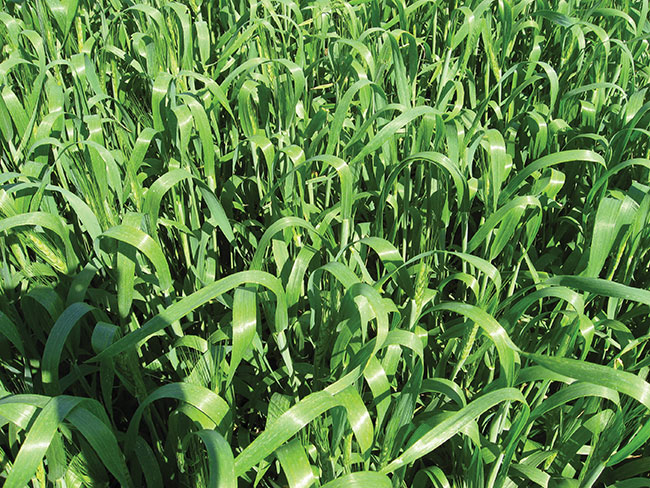 For the most effective control of tan spot in wheat, target the flag to early anthesis stage. Photo courtesy of Randy Kutcher.

Why not throw in some foliar fungicide for leaf disease control when applying herbicides or apply in a tank-mix with a plant growth regulator (PGR)? That’s been a question commonly asked – and acted on – by some producers for some years. But is the practice justified? When is the right timing for a foliar fungicide application for leaf spot disease, and how does that match up with Fusarium head blight (FHB) control? Those are some of the questions Sheri Strydhorst, agronomy research specialist with Alberta Wheat and Barley, recently set out to answer with research conducted in Alberta.

“There was some previous research that showed flag leaf timing was best for foliar disease control in spring wheat, but there is always talk that the new varieties have improved disease resistance,” Strydhorst says. “From a producer’s perspective, it is good to be able to prove that those recommendations are still valid.”

Additionally, there have been anecdotal reports of producers tank-mixing fungicides with herbicides, or with PGRs at early stem elongation in an attempt to control foliar diseases – arguably to reduce application costs and the number of trips across a field.

Strydhorst’s research was conducted at sites in Barrhead, Bon Accord, Red Deer, and an irrigated site in Lethbridge in 2018 and 2019.

The objective of the study was to determine the effects of foliar fungicide application timings on leaf spot disease severity, yield, quality and economics of these two large-acre CWRS (Canada Western Red Spring) wheat varieties, as well as provide up-to-date fungicide timing recommendations to producers and agronomists.

Four single-fungicide application timings were compared, and included a non-treated control. At the herbicide timing of BBCH 22-23, Tilt 250E (propiconazole) and Trivapro A+B (azoxystrobin, propiconazole and benzovindiflupyr) were compared. These fungicides are registered to control Septoria leaf spot and tan spot at this growth stage. The Tilt rate applied was the registered rate for this stage, which is one-half of the rate used at later growth stages.

Prosaro XTR (prothioconazole and tebuconazole) was applied at FHB timing at early anthesis (BBCH 61-63). This timing is registered for suppression of FHB and control of leaf blotch, glume blotch and tan spot. 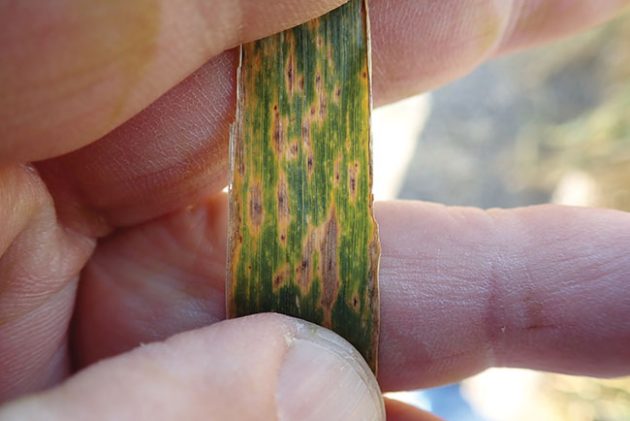 “We also didn’t see any yield difference with the PGR application timing compared to the control. The research showed that tank-mixing a fungicide with a herbicide at early weed control timing or with a PGR would not be economical,” Strydhorst says. “But we do still hear about producers asking about these practices.”

Fusarium-damaged kernels (FDK) and DON levels were also measured. Overall, even at responsive sites, FHB levels were low. As a result, FDK and DON were not affected by fungicide applications.

Overall, the research found that when environmental conditions were favourable, foliar fungicide application at flag leaf or early anthesis provided the highest yielding and most profitable timing.

Strydhorst says the research also highlights the importance of assessing the disease triangle when making a foliar fungicide application decision. It consists of having a susceptible host, the presence of the pathogen, and favourable environmental conditions for disease development. This not only applies to foliar diseases, but to FHB as well. 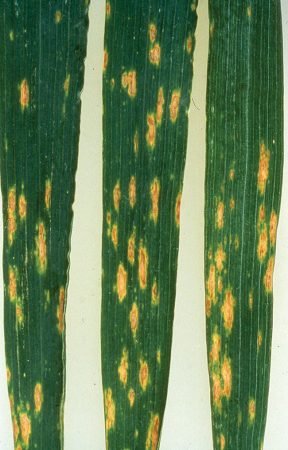 Tan spot is one of the pathogens in the leaf spot
complex of wheat.
Photo courtesy of Lorne Duczek.

“Producers should use Fusarium risk maps and disease risk assessments to decide on fungicide timing for control of both leaf disease and Fusarium,” Strydhorst says. “If Fusarium risk is a concern, I would definitely lean towards early anthesis timing as an option to control both diseases.”

Research led by Randy Kutcher of the University of Saskatchewan found similar results when comparing flag leaf and anthesis application timing. This research was conducted from 2013 to 2015 in Saskatoon, Indian Head and Melfort in Saskatchewan, and Brooks, Lacombe and Lethbridge in Alberta, although not at every site in every year.

Kutcher’s results also found that application at early anthesis provided adequate control of leaf spots. Yield was similar between the flag leaf and early anthesis treatments under high disease pressure, even though leaf disease severity was slightly higher with the early anthesis timing.

Test weight and TKW were also higher with the anthesis timing. The dual foliar fungicide application was not economically justified, even though there was a small improvement in leaf spot disease control.

“I think there is something else that is equally, if not even more important, with regard to seedling stage application: growers risk losing the fungicides if the pathogens become insensitive (resistant) to the fungicides,” Kutcher says.

“That could be a much bigger cost to the industry than the three to five dollars an acre the grower is wasting with a seedling application.

“If we lose our effective fungicides due to overuse it will cost growers a lot more in the long run.”