Here’s another coffee shop myth that sounds good on paper, but not so good when put to the test.

“Recently, there have been many anecdotal reports regarding the usefulness of foliar calcium applications as a replacement for fungicides reducing sclerotinia activity,” explains Dr. Stephen Strelkov at the University of Alberta.

“If effective, the application of calcium, which costs $1.25 to $3.00 per acre, could save growers thousands of dollars annually in chemical costs, while at the same time maintaining yield and quality.”

In theory, the calcium application has a basis for sclerotinia control. Strelkov explains that sclerotinia produces a non-specific toxin called oxalic acid. Oxalic acid is essential for disease
development, although its precise role is not well understood. Given the importance of oxalic acid in the development of sclerotinia stem rot, it follows that treatments that reduce the amount of free oxalic acid will be helpful in controlling the disease.

Oxalic acid interacts with calcium, forming calcium oxalate crystals that precipitate out of solutions. So if sufficient quantities of calcium are applied to chemically bind all of the oxalic acid produced, infection will be less likely to occur. “Previous research hypothesized that if enough calcium chloride was added, there would not be any infection,” explains Strelkov.

In addition, Strelkov says that the few field trials on stem rot have been contradictory. A field study from North Dakota showed no significant effect of calcium on the severity of sclerotinia stem rot on canola, but this may have been due to time of application, which was at the rosette or first flower stage. Control treatments of fungicides are generally most effective at full flower stage. In contrast, another field study in North Dakota found that calcium application significantly reduced disease levels relative to non-treated controls, although not as much as the fungicide used in the trial, Benlate. 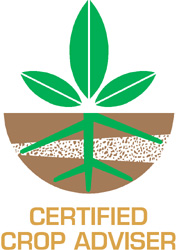 Canadian trials more conclusive
Preliminary studies conducted in 2005 by Agricore United in co-operation with Strelkov looked at the use of calcium carbonate to control sclerotinia stem rot in canola. Although the plots were not randomized and there was insufficient disease pressure at one of two sites, the diseased site indicated no significant reduction in disease severity in response to calcium treatment alone. Statistically significant reductions in disease were observed when Rovral fungicide was applied at a full rate, or in a half rate combination with calcium chloride or calcium carbonate. However, no half rate fungicide treatment alone was included, so no conclusion can be made regarding the synergistic effect between calcium and the fungicide.

In 2005, a similar trial was conducted by Agriculture and Agri-Food Canada at Lacombe, Alberta and Melfort, Saskatchewan and the Gateway Research Organization at Westlock, Alberta. However, again disease pressure only allowed the analysis of one site near Morinville, Alberta. At the Morinville site, only Ronilan EG fungicide treatments significantly reduced stem rot incidence when applied at full or half rates at very early bloom, or when applied as half rates at early bloom or full bloom.

The calcium treatments included calcium chloride at 10 litres per acre and calcium carbonate at seven pounds per acre, and two commercial calcium formulations at four litres per acre. When applied at the same growth stages as Ronilan EG, none of the calcium products significantly reduced stem rot incidence compared with the check.

Yield assessments were also done and none of the treatments significantly increased yields compared with the check. Average stem rot incidence levels at the Morinville site were 15 percent for the check, with no yield response to fungicide application. Strelkov explains the yield results concur with Canola Council of Canada recommendations that a moderate to high level of infection is needed to provide a significant yield increase in response to fungicide application.

To further confirm the results of these few trials, Strelkov would like to see a collaborative, multi-site trial at a number of locations across the prairies. In the meantime, growers are advised to save their application dollars for fungicides that have a proven track record, so as to not risk the yield potential of their canola crop.

“The use of multiple locations will help ensure that there is sufficient disease pressure at some of the sites to draw meaningful conclusions,” says Strelkov.