Flooding in parts of Saskatchewan and Manitoba delayed, and sometimes prevented, seeding in 2011. As prairie producers plan for 2012, they will need to take into account how the excess moisture has affected soil fertility.

Nitrogen loss is the most common soil fertility problem producers are facing as a result of wet weather in 2010 and 2011. Jeff Schoenau, a professor of soil science at the University of Saskatchewan, explains that as the excess moisture fills air pockets in the soil, micro-organisms run out of oxygen. The micro-organisms start using up nitrates instead, leading to denitrification. Heavy-textured, or clay, soils, such as those found in the Regina Plains and Red River Valley, are especially vulnerable to denitrification.

Nitrogen can also be lost through leaching
“Given the amount of precipitation that some areas had, about 20 inches in the growing season, there would be potential for some movement below two feet in the soil profile,” Schoenau says. “In Saskatchewan, in the 2011 season it did get warm and dry in the summer, and I think we did see some of that deep nitrate that may have been leached in 2010 come back to a certain extent in 2011. So what you’re going to see in the end is going to depend on how 2012 boils down for the folks in the southeast corner (of Saskatchewan), as they were the folks that really got hit by the excess moisture this year.”

Unlike nitrate, ammonium does not denitrify or leach easily. Producers who experienced flooding shortly after applying ammonium fertilizer should see a lower level of nitrogen loss.
The amount of nitrogen left in the soil also depends on what was growing in it.

“Some guys had good crops in the Red River Valley. Spring wheat yields ranged from 30 to 60 bu/ac, so there was still considerable crop uptake of nitrogen,” says John Heard, crop nutrition specialist with Manitoba Agriculture, Food and Rural Initiatives.

Weeds are a mixed blessing for producers with unseeded acres, says Schoenau. Weeds can stop nutrients from being lost in wet years, but if weeds are allowed to flourish, the nutrients they use may not be available soon enough for the next year’s crop.

“Even as the weeds grow older, if you can terminate them, you’re going to reduce any further [nutrient] uptake. The sooner you terminate those weeds, by tillage or by application of a herbicide, the better opportunity you’ve got for the nutrient to be released out of the weed biomass and be available for the following crop,” says Schoenau.

However, producers shouldn’t assume that they are low on nitrogen. Heard says there are high soil test levels of nitrogen popping up, particularly in fields with poor crop production. He also points out that it’s impossible to calculate how much residual nitrogen remains without doing a soil test.

Extreme weather calls or soil tests
“Often agronomists or farmers who have been keeping records in the past, when they follow through a normal year without excessive wet periods and a normal crop, can come pretty close to knowing what types of residual amounts they’re going to have. But you just have to throw that criteria out the window when you get the extreme years,” says Heard, who suggests soil sampling in the fall.

Schoenau encourages producers to go deeper than normal to gather soil samples. Excess moisture causes more variability in nutrient availability within fields, especially as some parts of the same field may have been seeded while others were left to fallow.

Manitoba’s Water Protection Act no longer allows producers to apply fall fertilizer between November 10 and April 10, so producers who apply fertilizer in the fall need to do so earlier than they may be accustomed to. Producers have several good options for spring nitrogen application, such as pre-plant banding and side- or mid-row banding at seeding. Broadcasting nitrogen prior to or shortly after seeding, carrying out seed-row applications and top-dressing after crop emergence are also options.  Schoenau emphasizes that getting the nutrients to the crop is more important than finding the ideal application method.

“In terms of management practices, I guess we’re all hoping that the fields are going to be dry enough that you’re going to be able to get out there and put your fertilizer into the ground at the same time that you seed. In some cases I know in the spring of 2011, it was pretty wet, so growers had to go out and broadcast fertilizer. It’s not an ideal application method, but still, I think it’s better than not doing anything and having your crop suffer from nutrient deficiency,” says Schoenau.

If the spring of 2012 looks like it’s going to be wet, producers may want to consider an enhanced-efficiency nitrogen fertilizer.

“There are some specialty products that, in a normal year, in a dry year, will produce no more yield than a conventional program. But in excessively wet years, when we have losses, when used properly, they may really help protect our nitrogen supply,” says Heard. He explains that these enhanced-efficiency nitrogens work in one of two ways. Some delay the release of nitrogen so that it’s available later in the season. Others inhibit nitrogen conversion to the nitrate form, reducing losses through denitrification and leaching.

If wet areas dry up next spring, producers should be ready to take advantage of good growing conditions. Schoenau says many producers in east-central Saskatchewan who were flooded out in 2010 did well in 2011.

“It did smarten up in the spring of 2011 and those folks pulled some good crops off of there. There’s potential there; you’ve got the stored soil moisture. You want to make sure you’ve got the fertility there to use the moisture effectively. And if things straighten out you’ve got the opportunity for a good crop on that land,” says Schoenau. 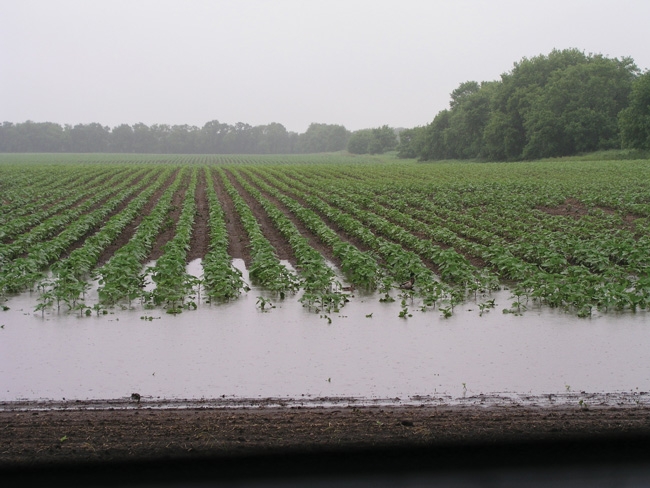 Deeper than normal soil testing will help to assess soil fertility needs. Flooding in parts of Saskatchewan and Manitoba delayed