Everything in moderation. That’s the message coming from researchers who have tried over the years to identify best practices that can help flax growers optimize flaxseed yields. Recommended agronomic practices that can help achieve higher yields have been developed, but finding a consistent yield response to fertilizer applications beyond current recommendations remains a challenge.

Unlike other crops such as canola or wheat where yields can be pushed higher with higher applications of fertilizer N, flax seems to only respond to moderate levels. “Even with all of the research work we’ve done, flax and its response to fertilizer is still baffling,” says Dr. Guy Lafond, research scientist at Agriculture and Agri-Food Canada (AAFC) in Indian Head, Saskatchewan. “Flax does not want to get pushed, so putting on higher rates of N fertilizer seldom improves yield or crop performance. Even in comparing different cultivars, in the end they all yielded about the same and the highest yields were obtained with the recommended N fertilizer rate.”

Lafond led a three-year multi-site study from 1999 to 2001 at five locations across Western Canada looking at various factors such as seeding rate and date, fertilizer rates and different cultivars. “The study confirmed that flax is well adapted to no-till and performs well under these systems,” explains Lafond. “The results also showed that flax can be safely seeded later in the spring in more northerly locations, even past the middle of May with no yield decrease, while more southerly sites benefited from seeding earlier near the first of May.”

Lafond compared three fertilizer rates of 67, 100 and 133 percent of the N recommended for a target flax yield of 32.3 bu/acre, placed as a side-band at the time of seeding. The results showed a seed yield increase with N when going from 66 to 100 percent of the recommended rate, with no increases past 100 percent. Adding N resulted in a small drop in seed oil content. Researchers also found a lack of response to N with the later planting date beyond 66 percent of the recommended N rate, suggesting reduced nitrogen rates with later plantings are possible. Given the overall results, and with continued research over the past few years, current recommended N fertilizer rates remain the same.

Dr. Cynthia Grant, research scientist at AAFC in Brandon, Manitoba, has had similar findings with various flax research projects she’s been involved in over the years and notes the secret to getting a high yield with flax is not putting on extra fertilizer. “It is important to have adequate levels of nutrients, but if you think you can get high yields by boosting your N and P rate, it’s not necessarily true,” says Grant. “The reasons people get good yields of flax compared to poorer yields remains a bit of a mystery.”

Grant led a three-year study at two locations in western Manitoba from 2000 to 2002 comparing P fertilizer applications, impacts of preceding crops and mycorrhizal association. “Flax is sensitive to seed-place P and tends to be less efficient than many other crops at using fertilizer P,” explains Grant. “Many other crops will put out more roots to take advantage of an area of high P concentration around the granule, while flax will grow right through it. Therefore, flax is more of a bulk soil feeder than a point source feeder.”

The study results showed that preceding crop had the greatest influence on all factors, with seed yield being significantly greater when flax was seeded after wheat than after canola. “Flax is more reliant on mycorrhizal associations as an alternate way of accessing P, and yields were much higher when flax followed a cereal or mycorrhizal crop in rotation rather than canola, a nonmycorrhizal crop,” says Grant. “In our study, flax yields were reduced by 15 percent when seeded on canola stubble, as compared to wheat stubble, emphasizing the importance of the mycorrhizal association.”

Early-season P nutrition was enhanced by residual P and by side-banded P fertilizer, but effects on final seed yield were minor. “Phosphorus fertilization of flax may be more beneficial on soils where P supply is extremely depleted,” says Grant. “However, with moderate deficiencies, the benefit is likely to be low.” Maintaining P through the rotation by targeting applications to more responsive crops, she suggests, would possibly be more cost-effective than application of P to flax.

Grant also looked at the impact of the preceding crop and P fertilizer on cadmium (Cd) levels in flax, which if too high may limit acceptability for the health food market. “In our study, flaxseed Cd was higher after canola than after wheat,” says Grant. “Overall, preceding crop had the biggest impact on Cd levels. The impact of fertilizer management on Cd levels was very low.”

Agronomic practices important
Researchers have developed good agronomic practices that can increase the likelihood of maximizing flax yields. Lafond’s research showed that higher seeding rates are important for optimizing yield, and a target plant density of 300 plants per square metre or more is recommended. “Even with high seeding rates in our multi-site study, the target plant population was only achieved 60 percent of the time at early seeding and 73 percent of the time for late planting,” says Lafond. “To achieve optimum yields under no-till, growers should seed heavy and make sure to have good seed and fertilizer separation for good stand establishment. ”

Using soil test recommendations and avoiding excess N or P in the seedrow are recommended practices for flax production. “Flax is sensitive to seed-placed fertilizer and too much N or P in the seedrow can harm stand and yield potential,” explains Grant. “Although some recommendations indicate that there will not be a decrease in grain yield by putting P on with the seed, you likely won’t see a yield increase either unless the soil P is very low.” If soil test P is low and a P application is considered necessary, side-banding is a good placement method, whereas N can be effectively applied as either a side-band or mid-row band.

Flax is not a competitive crop early on, making early weed control very important. “One of the biggest challenges flax growers may face going into the future is volunteer canola,” adds Lafond. “As the acres of canola have increased, so have the levels of volunteer canola in many areas, making weed control in less competitive crops such as flax and other specialty crops more of a challenge.”

Lafond adds that he has had flax research plots at Indian Head for over 25 years, and still hasn’t really figured out how to get yields of 30 to 40 bushels/acre consistently. “Perhaps the development of higher yielding cultivars in the future may help, but for now growers should continue to use good agronomic practices and soil test recommendations to optimize flaxseed yields.” 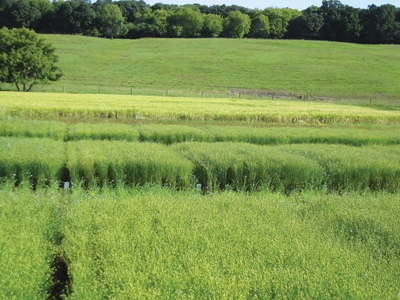 Flax trials comparing preceding crop Everything in moderation. That’s the message coming from researchers who have tried over the years to identify best practices that can help flax growers optimize flaxseed yields.