This was bound to happen.  Based on experiences in other parts of the world, glyphosate-resistant weeds were likely to develop in Western Canada. And they did.

Glyphosate-resistant kochia was suspected in three fields in southern Alberta during the summer of 2011, and Agriculture and Agri-Food Canada scientists confirmed the resistance in early January 2012.

“In order to confirm resistance, you have to prove it is inherited,” explains Hugh Beckie, weed scientist with AAFC in Saskatoon, who worked with colleague Bob Blackshaw at AAFC Lethbridge to confirm the resistance.

To do that, Beckie and Blackshaw dug up 15 suspicious plants from each of the three fields last summer, grew them out, collected the seeds, and planted them in the greenhouse for assessment.  They applied increasing rates of glyphosate to the three-inch-tall seedlings to assess the growth and survival rate – the standard protocol for confirming resistance. They applied up to 2250 grams active ingredient per hectare rate, which is equivalent to 2.5 litre per acre of the 360-gram formulation.

“There was over 90 percent survival of the resistant populations at the one-litre-per-acre rate of the 360-gram formulation. You wouldn’t be able to bump up rates to control them. What that would do is just select for higher resistance,” explains Beckie.

Jury is out on how resistance developed
Three different growers first brought the fields to the AAFC researchers’ attention on the chemfallow fields in close proximity to each other. Glyphosate was generally used alone without a tank-mix in the chemfallow years. The crops grown were mainly winter wheat, spring wheat, barley and mustard, with infrequent or no planting of Roundup Ready crops. Chemfallow was generally conducted every second or third year.

The resistant kochia were found in strips running across the chemfallow fields.  The seeds were obviously deposited by mature plants tumbling across the field.  Beckie observed dead plants alongside the strips of resistant plants.
“When I see that, it is likely resistance showing up,” says Beckie.

In 2011, the scientists also did a preliminary survey of 50 sites in surrounding fields within a 20-kilometre radius.  They are assessing these plants to find out if glyphosate-resistant kochia is a problem on some of these fields as well.  The results will be known by the spring of 2012.

“We still don’t know if the resistant populations wereselected in the fields where we found them or blown in from other fields,” says Beckie.

This isn’t the first time glyphosate resistance has been identified in kochia populations. Kansas, Colorado and Nebraska have confirmed cases, and suspected cases are in North and South Dakota, Montana and Oklahoma.  The Kansas resistance was identified in 2007, and it has been found in corn, cotton, soybean, cropland and chemfallow at up to 500 sites and on up to 10,000 acres.

Given that one kochia plant can produce 10,000 seeds and it has a windblown, tumbling nature, resistance can spread rapidly by seed. In Kansas, weed scientist Phil Stahlman conducted a survey of 44 populations in 2011 and found that more than 50 percent of the populations he collected were resistant.

Beckie is investigating the mechanism of resistance. In Kansas, the resistance appears to be from gene amplification.  This is where the plant produces multiple target sites, which overwhelms the herbicide. Beckie suspects the same mechanism may be found here.

Managing kochia resistance
Glyphosate-resistant kochia has the potential to become a widespread problem.  Kochia is also resistant to Group 2 herbicides (glyphosate is a Group 9), with 90 percent of kochia populations sampled in Alberta, Saskatchewan and Manitoba resistant.

“When you look at Group 2 kochia resistance, it went from completely susceptible to completely resistant in 20 years.  It has the potential to spread rapidly,” says Beckie.

For in-crop applications to both glyphosate and Group 2-resistant kochia, there are still good choices.  In-crop applications in wheat can include herbicides like Triton K, Attain, Target and Infinity. Several years ago, research by Ken Sapsford at the University of Saskatchewan illustrated some of the best choices for controlling Group 2 resistant kochia, and these were primarily Group 4 herbicides.

Other herbicides that did not provide acceptable control of either type of kochia in wheat were the Group 4 herbicide 2,4-D ester at rates up to 8 ounces per acre, and Group 6/4 combo Buctril M. Since this research was done, other herbicides have been registered that can control Group 2-resistant kochia, and they contain a mixture of different compounds.  Many of these products will contain dicamba or fluroxypyr in the mix.

In chickpea and field pea, Authority is a good choice for both types of resistant kochia. In canola, Liberty will control both types in InVigor canola, and Roundup will control Group 2-resistant kochia in Roundup Ready canola.
Beckie reminds growers not to ignore kochia after harvest.  He says kochia can produce significant amounts of seed after harvest if left uncontrolled.

“What growers have to do now is work to slow down the spread,” says Beckie.

For 2012, the scientists plan to conduct field trials to look at alternative herbicides, and are also collaborating with Linda Hall at the University of Alberta on additional trials.

Farmers wanting to assess the likelihood of glyphosate developing on their farm can visit www.weedtool.com – a site hosted by Monsanto Canada but developed by western Canadian academic weed scientists. 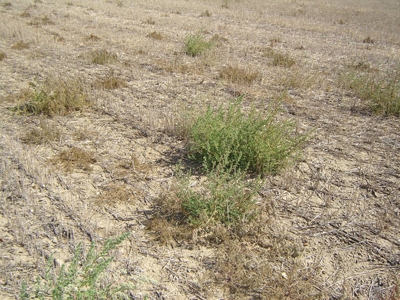 Glyphosate-resistant kochia remains green and healthy while dead kochia is visible – a clear indication of resistance. This was bound to happen. Based on experiences in other parts of the world