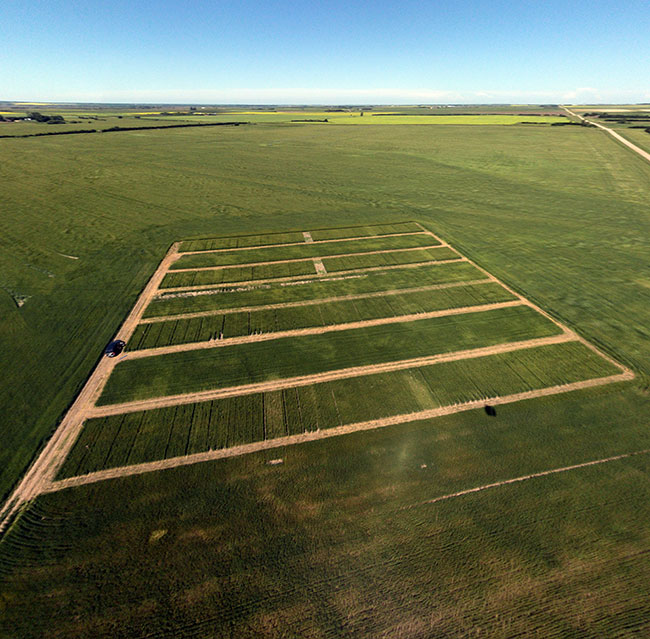 One of the sites in Farrell’s previous study on enhanced efficiency fertilizers. Photo courtesy of Frank Krijnen.

The idea with enhanced efficiency nitrogen fertilizers (EENFs) is to get more nitrogen to the crop when the crop needs it, while reducing nitrogen losses. Minimizing those losses is important for improving production efficiency, environmental stewardship, and access to markets that have an interest in sustainably produced crops. A key nitrogen loss issue for Prairie crop production is nitrous oxide.

The University of Saskatchewan’s Richard Farrell is evaluating the effects of EENFs on nitrous oxide emissions to develop practical options for improved fertilizer management.

“Most growers have heard about 4R nutrient management, with the right source, right rate, right time, and right place. Using an enhanced efficiency product would be part of that right source,” explains Farrell, an associate professor in soil science.

“What we are trying to do through this research is to tweak the fertilizer best management practices to maintain the agronomic and economic potential of cropping systems while reducing any environmental impacts from the fertilizers.”

Based on what people in the industry have told Farrell, adoption of EENFs in Western Canada is around 10 to 12 per cent at present, which is up from about two per cent five or six years ago.

Previous study: EENFs and nitrous oxide losses
Farrell’s current EENF project builds on the results from his previous three-year evaluation of EENFs under Saskatchewan conditions, which was completed in 2018. That earlier study was part of a tri-province project with Mario Tenuta at the University of Manitoba and Guillermo Hernandez-Ramirez at the University of Alberta. Tenuta led the overall project.

The three studies evaluated a wide range of nitrogen fertilizer products and compared fall versus spring applications. All three studies involved wheat and used the same fertilizer treatments, measurement protocols and so on, to enable the researchers to bring all of the data together for a Prairie-wide perspective. In addition, each study had its own particular emphasis – Farrell’s study evaluated the fertilizer treatments under irrigated and dryland conditions in Saskatchewan’s Dark Brown soil zone.

Polymer-coated urea is intended to slowly release nitrogen to the crop. The urea-based inhibitor products slow down the microbial-mediated processes that convert urea into other forms of nitrogen, including forms that are easily lost from the soil.

The researchers’ primary focus was to assess the effect of the different treatments on nitrous oxide emissions, although they also looked at wheat yields. Because of that focus, all the fertilizer products were applied at the rate recommended by a site-specific soil test.

He explains, “Normally with an enhanced efficiency product, you can use a reduced nitrogen rate. For example, if your soil test recommendation is 100 kilograms per hectare, then you could put on perhaps 80 kilograms because you can lower the rate by about 20 or 25 per cent – some of the manufacturers suggest even greater reductions – to get the same yield. But reducing the amount of fertilizer also reduces nitrous oxide emissions, and we didn’t want to confound what was going on by changing the nitrogen amounts. So, everything was applied at the soil test recommendation.”

As a result, even if some of the EENF products had increased the crop’s nitrogen use efficiency, it probably wouldn’t have shown up as a higher yield under most conditions. The recommended rate would usually have provided enough nitrogen for the crop to achieve its potential yield and protein levels.

However, he adds, “In our second year, it was looking like there might be some yield effects, but then the whole trial was wiped out by hail. That didn’t really
affect the greenhouse gas part of what we were doing, but it meant that there was no yield data.”

Farrell and his research group found some big differences in the nitrous oxide amounts emitted from the different treatments in the Saskatchewan study.

“Any product with a nitrification inhibitor really reduced nitrous oxide emissions. Those products were also the most consistent – whether they were applied in the fall or the spring, they gave large emission reductions,” he says.

“A nitrification inhibitor keeps the nitrogen as ammonium. If the fertilizer didn’t have the nitrification inhibitor, the urea would rapidly convert to nitrate, which would then be available in the spring when there is a lot of moisture from the snowmelt. And that would result in large nitrous oxide emissions.”

Urea with a urease inhibitor consistently reduced emissions when spring-applied, but not when fall-applied. During the study, fall was milder than usual, so the fall-applied urease inhibitor products were put on when the temperatures were still mild, which may have impacted their performance. He explains that urease inhibitors slow the breakdown of urea to ammonium, but with the prolonged mild weather there was time for this conversion to occur in the fall. Then, once the ammonium was formed, it was probably converted to nitrate rather quickly, resulting in high emissions during spring snowmelt.

“The polymer-coated product was inconsistent across everything,” Farrell notes. “There was one year at both irrigated and non-irrigated sites where it did reduce emissions, but in the other years it had no effect. So for this product in particular, the environmental conditions seemed to really control what was going on.”

The Manitoba and Alberta studies had similar results to the Saskatchewan study, with the same products giving the same types of effects.

Next step: EENFs and agronomics
Farrell’s new project takes his EENF research to its logical next step. “We knew that we needed more information about how these products would perform from an agronomic standpoint. Could we maintain yields while dropping the fertilizer amounts? Lowering the amounts would also give us an added reduction in nitrous oxide emissions,” he says.

“And we needed to see how the products performed with some of the other major crops. So we chose canola for this project.”

The treatments will also compare spring and fall applications. “We really want to see if we can minimize any environmental impacts from a fall application while maintaining the yield benefits that come from the products,” Farrell notes.

“One of the conclusions of the tri-province project was that fall nitrogen applications are at a higher risk for nitrous oxide losses. So, usually the recommendation is to not apply nitrogen in the fall. But, if you’re going to fall-apply it, then do it when the weather is really cold so the microbial communities are working really slowly and aren’t going to covert a lot of the nitrogen to nitrate,” he explains.

“As farms just keep getting bigger and bigger, the importance of time management increases. In some cases, managing your time is more important than managing other things. [Fall fertilizer applications are a way for growers to manage their heavy spring workloads.] Also, fertilizers tend to be a little cheaper in the fall. So, a lot of people want to do fall applications.”

His research group will be collecting data on the crop’s nitrogen uptake, nitrogen use efficiency, yield and oil content, and measuring the nitrous oxide emissions.

“We are hoping to be able to demonstrate that you can use lower amounts of these enhanced efficiency products. You pay a little bit more for them, so to make your money back you either have to increase your yields or lower the amount of nitrogen that you are applying,” Farrell says.

“If you can use lower amounts of nitrogen and still maintain yields, that would reduce your nitrous oxide emissions and lower your carbon footprint. So, a lot of the commodity groups are interested in this type of research because the European Union and other countries, as well as companies like Walmart, are looking for products with a low carbon footprint.

“In addition, if we can show that using enhanced efficiency products can reduce the environmental impact of a fall nitrogen application while maintaining the agronomic potential, it would be another advantage for Prairie farmers.”

Farrell emphasizes, “If you follow best management practices, you get environmental benefits. They go hand-in-hand. So, we’re just trying to figure out the best way to manage nitrogen in a sustainable fashion.”