An Ontario crop business is the first in Canada to adopt a unique system for late-season applications of nitrogen on corn and soybeans. By using the GreenSeeker technology and the Y-Drop system, which is attached to a high-clearance sprayer, Good Crop Services Ltd. of New Hamburg is finding a way to apply the right amount of fertilizer at the right time and in the right place. 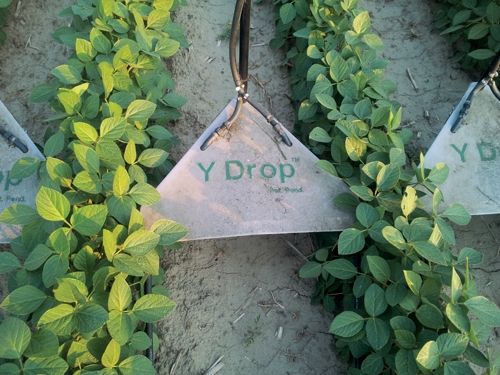 It’s the placement of the product that makes it far superior to what’s on the market,” says company owner Don Good of the Y-Drop system.

Developed in Iowa, the Y-Drop is a tool that can place any liquid product within two or three inches of a crop row. Good adopted the Y-Drop to complement the GreenSeeker for variable rate applications. The GreenSeeker system from Trimble Agriculture uses optical sensors with an integrated application system to measure crop status and variably apply the crop’s nitrogen (N) requirements. The purpose is to reduce fertilizer costs while boosting crop yields. Whereas other precision agricultural methods rely on historical information or mapping to make the nitrogen recommendation, this technology operates in real time, allowing the operators to make variable-rate applications on the go.

The sensor uses light-emitting diodes to generate red and near-infrared (NIR) light. The light is reflected off of the crop and measured by a photodiode at the front of the sensor head. Red light is absorbed by plant chlorophyll and healthy plants absorb more red light and reflect larger amounts of NIR than those that are unhealthy. The reflectance values are used to calculate the Normalized Difference Vegetation Index (NDVI), which is an indirect measurement of the crop’s aboveground growth. By comparing the NDVI of the crop being evaluated to that of an N-rich strip in the field, the technology can be used to respond to field variability.

With the GreenSeeker, Good was able to achieve one of the three Rs of precision agriculture: placing the right amount. However, he was looking for a way to improve the other two – the right time and the right place – for late-season applications.

Paul Raymer, precision ag specialist with the Farm Office in Tavistock (a Trimble dealer), says the problem was related to the nozzle system on Good’s high-clearance sprayers. “They had no way to go through 30-inch corn rows when they had 20-inch nozzle spacing on their sprayer,” says Raymer. “They created their own system last year but they weren’t really happy with it.”

Good says they made some brackets and used drop pipes to place the N between the rows. “It wasn’t bad but it wasn’t that stable,” recalls Good. “We were going to change that, and Paul came across the Y-Drop. It is definitely the better way to go.”

Dan Muff, CEO of Y-Drop LLC in Iowa, says the system can fertilize any row crop at various stages of the plant’s development. In corn, it can fertilize from knee-high to tassel. For soybeans, it can be used at V2, V3 or higher, up to R2-and-a-half.

The system was designed with four things in mind – using the right product, at the right time, in the right place, and the right amount.

“And that goes back to plant nutrient uptake and what stages of growth do plants take up nutrients,” says Muff.
Besides boosting yields through additional nutrition, Muff says the system has environmental benefits.

“Because we’re placing the right amount in the right place at the right time, we can be very frugal with our fertilization and create higher yields with less fertilization by placing it where it needs to be,” says Muff.

Raymer concurs, saying the combination of the technologies provides an efficient way to “spoon-feed” nitrogen to the plants. “We’re spatially optimizing nitrogen placement based on what the GreenSeeker is seeing on a vigour level,” says Raymer. “It pushes out a prescribed rate, and now we’re going to the next level of opportunity with the Y-Drop where we have a better placement of the product.”

Raymer says placing nitrogen beside the row is particularly beneficial in dry conditions, as were experienced this past summer. “When we have heavy dews, that dew will drip off the plant and into the soil around the root zone in what is called the ‘wet zone.’ And if nitrogen is placed beside the plant, and the wet zone is large enough, it spreads out two or three inches,” explains “Raymer. “That’s going to help saturate that nitrogen in the root zone, as opposed to the roots trying to reach out for it in the centre of the row.”

Echoing Raymer’s comments, Don Good says “It slides through the corn, just slithering between the rows in perfect motion without damaging the crops.”

He is also testing it on four plots of soybeans, planted in 30-inch rows. The system is being used to apply potassium thiosulphate (0-0-25-17). Good is also using it on a plot where he applied nitrogen to the beans.
“Normally, we do not grow 30-inch soybeans and we’re not sure if our hybrids are going to be adaptable yet,” says Good. “But when we can put more of the potash on at a critical time between the R4 and R6 stages of growth, we feel that there is a real advantage to that.”

So far, Good says, they can see a physical difference in the beans and he looks forward to the yield results at harvest. In the meantime, he has been impressed with the combination of the GreenSeeker and the Y-Drop.
“It’s very interesting because the Greenseeker is scanning the crop for where more N is needed,” says Good. “And the beauty of the Y-Drop is that it places it right beside the row.”

Admitting he had reservations at first, Good says the technologies are a good fit for his company’s mission of custom applications, which is to help farmers become more profitable. “If we can give them something of benefit that is economically worth it, then we put it on accordingly. And if you don’t need it, we don’t put it on,” says Good.