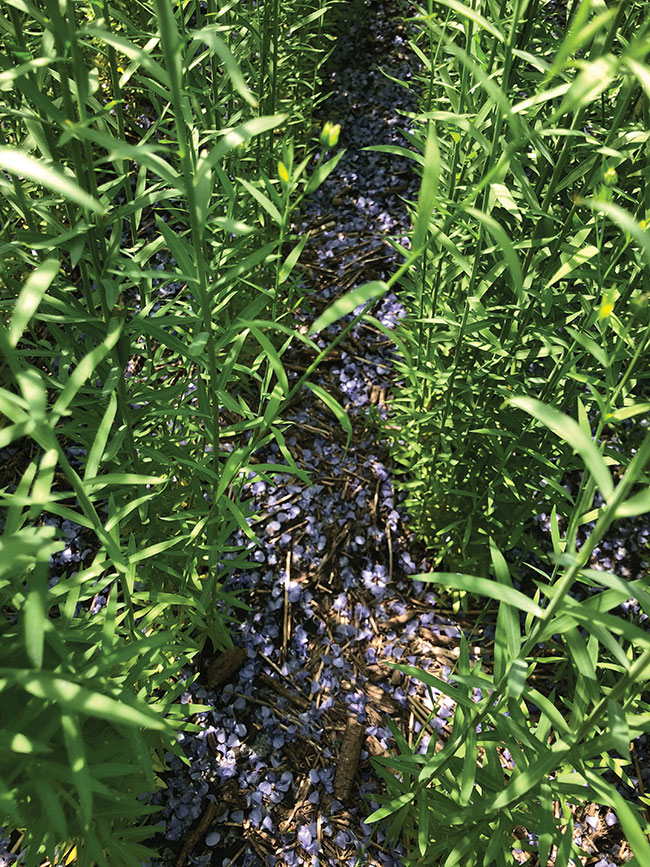 The ground is exposed, but relatively weed-free, in this well-managed crop on 7.5” row spacing in a Manitoba flax field (2022). Photo courtesy of dane froese.

“Flax is an important crop in Western Canada, but it isn’t given enough agronomic attention,” says Benaragama, who now works as an assistant professor and Crop Protection Chair in the department of plant sciences at the University of Manitoba. “Generally, its productivity is lower than crops like canola, but farmers plant it because flax is grown with fewer inputs, and the benefit from the inputs is fairly high compared to canola. If there’s a good price, farmers can get more from flax than canola. If we can boost yield by even five per cent, [that] would help lots of producers.”

A large body of flax research looks at plant density, row spacing and N rate in differing combinations, but the results are inconsistent and depend on environmental conditions, he adds. This study was the first in Canada to add fungicide application as a fourth factor.

For each of the four factors, two levels were studied, resulting in 16 treatment combinations. For seeding density, the treatments were a rate of 450 seeds per square metre and a rate of 900 seeds per square metre. The row spacing treatments included a narrow row spacing (19 centimetres at one site, 20 centimetres at another) and a wider row spacing (40 cm and 38 cm). Two fertility rates included in the study were 65 and 130 per cent of soil test recommendations. Finally, in the fungicide category, the two treatments were a foliar pyraclostrobin and fluxapyroxad treatment and no fungicide applied.

The researchers concluded that most agronomic factors didn’t have an individual effect on flax yield, although fungicide was the main factor affecting crop yield, followed by N application.

However, the authors note an important caveat: the above “optimum combination” didn’t produce consistently high yields in all environments – only under the most favourable environments.

The Flax Council of Canada recommends a plant density of 400 plants per square metre, but this  wasn’t achieved in the study.

“The yield stability analysis identified wide row spacing, high N, and fungicide application either with moderate or low plant density were both average high yielding and stable across many environments. This combination of treatments can thus be considered a good combination under many growing conditions,” they write.

Benaragama says understanding the unique environment is key to growing flax. “Conditions can vary from farm to farm and year to year. Understanding a stable combination is important,” he says. If producers see more weeds, he adds by way of example, they might want to go with higher seed densities and narrower row spacing. “The density will not change much – it won’t give you a lot of gain versus seed costs. But you might want to boost your N and apply fungicide to prevent diseases. You can play around depending on conditions.”

Dane Froese, an oilseed specialist for Manitoba Agriculture, says he found the biggest surprise in Benaragama’s research was that the researchers achieved stable yields on wide row spacing.

“We regularly tell [Manitoba] producers to go with higher density and narrower row spacing for flax. [But] if those weeds were managed well, I could see that wider row spacing working well,” he says.

Early season competition with weeds can be a major problem in flax. Unless producers are going in with a pre-seeding herbicide with residual action, Froese says he typically recommends they go in with high seeding rates to compete with broadleaf weeds and Group 1-resistant grasses.

Flax producers have two ways of chemically controlling weeds – pre-seed or pre-emergent products in Groups 14 and 15 that may be used in combination with glyphosate (Group 9); some Group 3 pre-seed products work as well but are more expensive The second option – in-crop herbicides – includes Group 1 graminicides, used for control of grasses, or Group 4 plant growth hormone regulators or Group 6 photosystem inhibitors. Froese says these aren’t gentle on flax and can cause crop injury on hot days.

Flax acres have declined in Manitoba, Froese says, to the point where mostly tried-and-true flax growers are planting the crop. These growers are used to fine-tuning their agronomic strategies, and tend to have more success than growers that “jump in and out.”

Currently, the Crop Development Centre in Saskatoon is the only flax breeding program in Canada, but the program has doubled the number of cooperative breeding sites in Manitoba with funding from the Manitoba Crop Alliance, meaning more lines are being tested in local field conditions – good news for flax producers.