Soil sampling and testing: This gives a good inventory of soil nutrient levels and provides the basis for recommending additional nutrients on an individual field basis. Ideally, samples should be taken at zero- to six- and six- to 12-inch depths from at least 20 locations within a uniform field and then bulked into composite samples.

Inoculant: Beans are a legume crop but only fix about 30 to 50 per cent of their total nitrogen (N) requirements. The remaining N comes from mineralization of soil N and from N fertilizer. When beans are properly inoculated with Rhizobium phaseoli bacteria, the bacteria infect bean roots and form nodules on the roots which fix N from the air. Inoculants come in powdered, granular or liquid form.

Nitrogen (N): When growing beans in soil testing less than 80 to 100 lbs. of N/ac in the zero- to 12-inch depth, additional N fertilizer is often beneficial to achieve optimum yield. In a cool spring, when nodules are slow to develop, plants may not be able to obtain sufficient N from the soil, resulting in deficiency and delayed crop growth. Therefore, in soils deficient in soil N, a modest application of N fertilizer can be a good investment.

Excess N fertilizer may reduce the amount of N fixed by beans and could delay crop maturity. To date, ARD research has not shown a benefit of in-crop N fertilizer application. However, ESN (polymer coated slow release nitrogen) fertilizer has sometimes shown benefit over using only 46-0-0 urea fertilizer. Farmers growing beans, particularly on sandy soils, may find benefit of using a portion of N fertilizer as ESN.

Potassium (K): Beans tend to have a higher requirement for K and often require almost as much potassium as nitrogen. Only 20 to 25 per cent of K taken up by a bean plant is contained in the seed at harvest. The remaining K is in the leaves and stems, which is returned to the soil after harvest.

Many southern Alberta soils are medium to high in exchangeable potassium, often ranging from 400 to 1000 lbs of K/ac in the zero- to six-inch depth of soil. Generally, K deficiencies are most likely to occur on intensively cropped sandy soils. Table 3 provides general recommendations for potassium fertilizer requirements when soils are less than 300 lbs. K/ac. It is best to either band K before seeding or sideband at the time of seeding. Broadcast incorporated K should be increased by 1.5 times to be as effective as banded K application on deficient soils.

Sulphur (S): Deficiencies of S are normally not a problem on irrigated soils in southern Alberta. Irrigation water generally contains enough sulphate-sulphur (SO4-S) to meet crop requirements. If soil S levels are less than 20 lbs/ac in the top 12 inches (30 cm), Table 4 can be used as a guide to decide if S fertilizer is required and what rates to use. If sulphur is required, apply a sulphate containing fertilizer such as ammonium sulphate (21-0-0-24) to correct the deficiency.

Micronutrients: Beans require all the essential micronutrients. Micronutrient research with beans in Alberta has only identified zinc (Zn) as occasionally being deficient and usually only on sandy soils.

From limited Zn response research data, Zn fertilizer recommendations have been developed (Table 5). Recommendations are based on soil texture and soil Zn analysis of a 0 to 6 inch soil sample depth using the DTPA extractable zinc method.

Banding zinc before or at the time of seeding is the preferred method of application. However, soil applied zinc sulphate could be substituted with one or two early foliar applications in June.

Zinc deficiency can be induced by cool, wet soil conditions in spring, which may reduce soil zinc availability to the crop. Beans grown in soils that have soil test Zn levels above the critical level may still show visual symptoms of Zn deficiency during wet, cool conditions in June. Beans will often grow out of the deficiency as the weather warms up. However, if cool weather conditions are prolonged, a foliar application may result in some benefit. 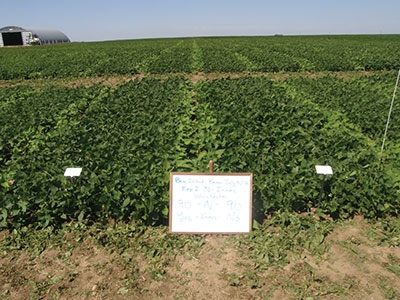