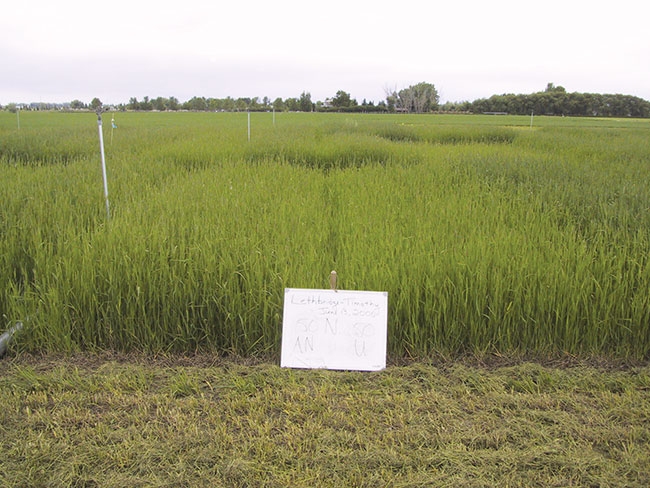 An important part of efficient cattle production is ensuring there is sufficient grass for both summer pasture and hay for winter feed. Most Prairie farmers do a very good job fertilizing their annual crops, but hay and tame pasture often do not receive the same high level of fertilizer management. Lower soil nutrient levels can often limit forage production and quality.

With about 20 million acres of Prairie land in tame hay or seeded pasture, the productivity of many hay and pasture fields can be improved with very good fertilizer management.

Generally, Brown and Dark Brown soils in the southern Prairies are often deficient in nitrogen (N) and in phosphorus (P), but usually are not deficient in potassium (K) or sulphur (S) for grass production. Black, Gray Wooded and Gray-Black transition soils are commonly deficient in N and P and are more frequently deficient in K and/or S, particularly on sandy soils.

Grass has a relatively high demand for nutrients to achieve good yield and quality. Generally, for each ton of dry matter harvested, about 25 to 30 lb/ac of N, 10 lb/ac of P2O5, 50 lb/ac of K2O and 5 lb/ac of S are taken up from the soil. Removal rates vary depending on grass species and growing conditions.

Optimum grass production requires adequate levels of soil P. The majority of prairie soils are naturally low in plant-available P. However, residual levels of P in soil will vary depending on past phosphate (P2O5) fertilizer use and livestock manure application. Fields that have received P2O5 fertilizer or manure application for a number of years may have good residual soil P levels and may not require additional P. Soil testing will help to determine this.

Nitrogen: Nitrogen fertilizer requirements depend on the soil test level of nitrate-nitrogen (NO3-N) and the potential yield. The need for N increases as available soil nitrogen levels decline and available moisture increases. Generally, grass will draw down available soil N levels during the growing season, so often soil test levels of available N are frequently low at the end of the growing season. Grass will respond dramatically to N fertilizer when soil N is deficient and moisture conditions are good.

If possible, N fertilizer should be applied early in the spring, even before grass begins active growth. If more than one cut is planned, second cut nitrogen requirements should be applied immediately after the first cut is taken.

Ammonium nitrate (34-0-0) is an excellent N fertilizer for broadcast application but availability on the Prairies is extremely limited. Therefore, urea (46-0-0) is often the only single analysis granular N fertilizer commonly available for broadcast application. When broadcast applied, urea can be subject to significant volatilization when surface soil and air temperatures are greater than 5 C. Volatilization is the change from urea to gaseous ammonia that can result in N loss to the air. Producers can also use liquid N fertilizer (28-0-0; a 50:50 liquid blend of urea and ammonium nitrate). Liquid N can be successfully dribble-banded onto grass in spring, but urea in the liquid is subject to the same volatilization as granular urea.

On Black and Gray soils, spring temperatures are generally cool enough to allow early spring broadcast urea with less N loss. However, on Brown and Dark Brown soils with warmer spring temperatures and windy Chinook conditions, urea volatilization can be a serious problem.

Urea fertilizer can be treated with a urease inhibitor that will reduce volatile losses of N for about 10 to 12 days. 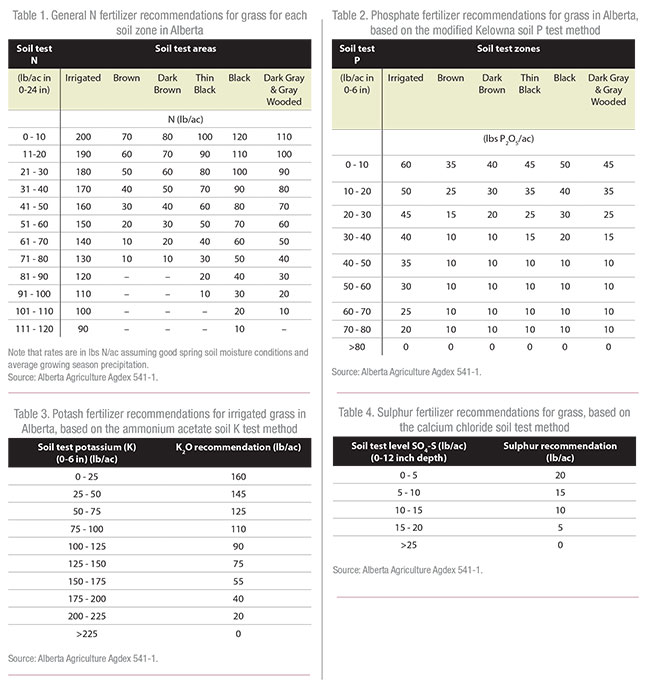 Phosphorus: Phosphorus fertilizer can be broadcast annually on grass stands in P-deficient soils. One strategy is to apply a batch application of P2O5/ac before grass establishment to meet crop requirements for four to six years. An application of 100 to 150 lb of P2O5 /ac is recommended on Brown, Dark Brown or Gray soils. In areas with higher production potential, such as Black soils or irrigated soils, 150 to 200 lb of P2O5 /ac application before establishment could be considered.

If P is limiting production, growers should apply an annual application of 20 to 40 lb of P2O5 /ac to meet crop removal rates, depending on yield potential. Under good moisture conditions, grass has feeder roots near the soil surface and can take up broadcast phosphorus with reasonable efficiency. Broadcasting is presently the only practical method of in-crop P2O5 fertilizer application and should be done in early spring. Dribble banding of liquid P2O5 (10-34-0) can also be used; however, the cost-per-pound of liquid P fertilizer is usually considerably higher than for granular P fertilizer. Table 2 provides general P2O5 fertilizer recommendations.

Potassium: Well-rooted grasses are fairly efficient in taking up soil K and do not commonly respond to K fertilizer. However, annual applications of potash fertilizer (K2O) should be considered (Table 3) in fields testing deficient in soil potassium. Applications should first be tried in carefully marked test strips to determine if K fertilizer is beneficial. On-farm strip trials are useful to check for a field-specific response to K fertilizer.

Sulphur: A soil test for plant-available sulphate-sulphur (SO4-S) can be useful to determine if S fertilizer is required. It is very important to note that plant available SO4-S can be highly variable across fields, particularly in fields with variable topography or soil textures. When a field is uniformly low in sulphur, a soil test is very useful to estimate S fertilizer needs. However, if only 10 to 20 per cent of a field is low in SO4-S, it can be difficult to identify these areas. Sulphate levels are usually adequate to high in the Brown and Dark Brown soil zones and frequently lower in the Black and Gray soil zones. Table 4 can be used as a general guide to determine when SO4-S fertilizer is required and how much to apply.

For more detailed information, consult your provincial Ministry of Agriculture website and a soil or forage crop specialist.