April 8, 2015 - Technological advances by U.S. Department of Agriculture (USDA) scientists are continuing to improve the way beneficial fungi are formulated for use as biopesticides.

Traditionally, biopesticide makers have cultured beneficial species of Beauveria, Isaria, Metarhizium and other fungi on moistened grains like rice or other solid substrates to coax them into forming specialized spores called "conidia."

These conidia are then harvested and formulated into biopesticide products, which can be applied to field- or greenhouse-grown crops as alternatives to synthetic pesticides or used in conjunction with them to delay the pests' development of insecticide resistance.

Over the past decade, however, microbiologist Mark Jackson and colleagues at USDA's Agricultural Research Service (ARS) have experimented with the use of liquid culture fermentation (LCF), an approach that's enabled them to mass-produce stable, effective spore forms called "blastospores" and resting structures such as "microsclerotia."

The researchers' studies have shown that microsclerotia are especially durable, long-lasting during storage, and effective as bioinsecticides and bioherbicides. LCF has also proven to be faster and more economical to use, yielding blastospores or microsclerotia in two to three days versus the ten to fourteen days needed to produce conidia using the traditional culture methods, says Jackson. He is with the ARS National Center for Agricultural Utilization Research in Peoria, Illinois. Replacing hydrolyzed casein and other expensive nitrogen sources with low-cost cottonseed flour also reduces production media costs by 80-90 per cent, he adds.

For example, blastospores from LCF cultures of Beauveria killed silverleaf whitefly nymphs 25 per cent faster than the conidia. Fewer blastospores were also required. Their studies also demonstrated, for the first time, that under appropriate LCF conditions, Trichoderma can form microsclerotia suitable for use as a seed coating or soil-incorporated granules to guard against plant diseases. 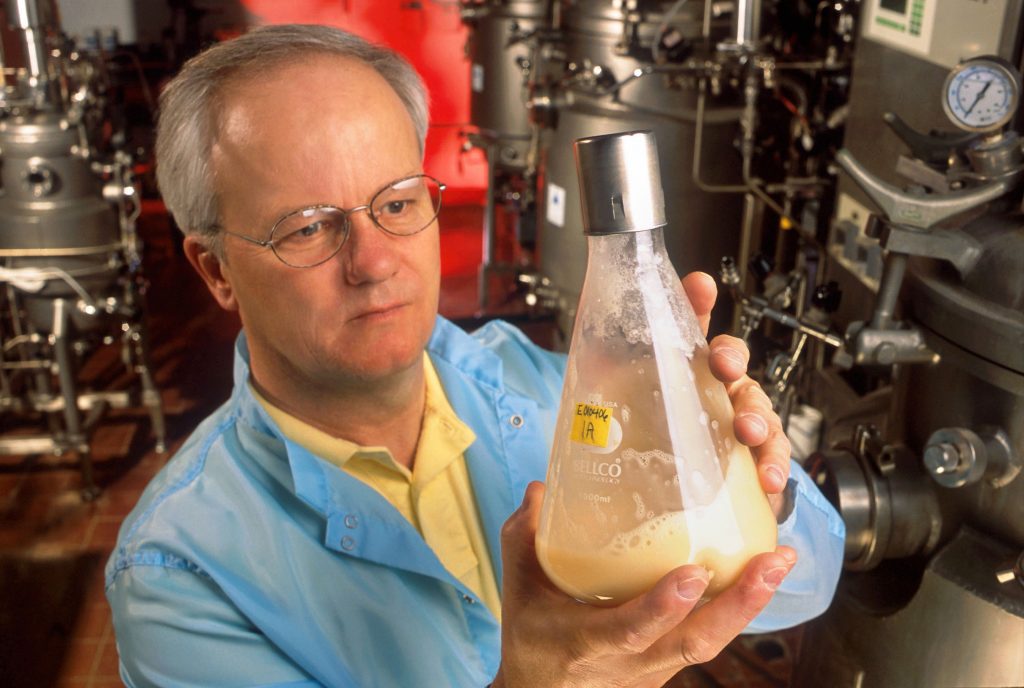 ARS microbiologist Mark Jackson examines a fungal culture being produced for a biopesticide against silverleaf whitefly. Technological advances by U.S. Department of Agriculture (USDA) scientists are continuing to improve the way beneficial fungi are formulated for use as biopesticides.