Regardless of current financial times, there are several inevitabilities facing growers and equipment manufacturers: growers continue to search for improved efficiency in operation of all their equipment, and the manufacturers and retailers continue to meet those demands. 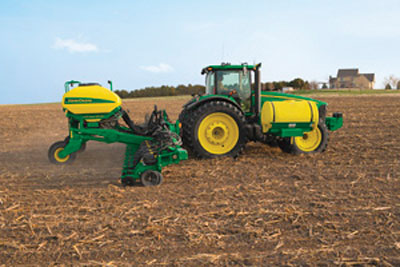 Stack and fold adds efficiency
Streamlining an already popular design is the order of the day with the John Deere 1720 Planter which is now equipped with Central Commodity System (CCS) technology.  The 1720 Stack-Fold planter is popular with row-crop producers for its optimum manoeuvrability and its apparent fit in strip-till operations. Its new configuration adds the CCS system to the 16 row, 30-inch 1720 model, reducing the time to fill the planter with seed, meaning more time is spent in the field planting.  This unique and efficient combination allows growers to cover more acres in less time, while providing a folding system that promotes easy transportation from field to field.

A large seed tank allows the operator to bulk-fill 100 bushels of seed at once, keeping things rolling in the field, instead of having to stop to fill separate hopper boxes. Pressurized air carries the seed, meaning gentler handling and decreased damage to seed coats.  Corn and soybeans can all be planted with the precision of the CCS system.
As for clean-up, it is made easier by access doors at the bottom of the CCS tank.

For advanced productivity and efficiency, the 1720 Stack-fold Planter will be standard equipment with the Pro-Series XP(TM) row unit. This particular design comes with a Tru-Vee(TM) opening and closing system, gauge wheels and a seed metering system to improve the entire planting process. This system allows 1.6 bushels of seed to be distributed among mini hoppers to ensure there is no weight variation on row units while planting.

One other advantage of the Pro-Series XP row unit is the Pro-Shaft(TM) drive, which eliminates the chains used to drive the seed meter, which reduces daily maintenance and annual chain replacements.
John Deere 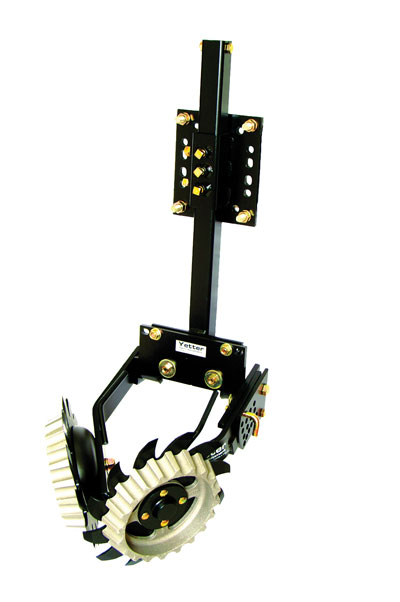 The 2967-039, frame-mounted, Floating Residue Manager is another of the Titan™ series, and has an adjustable mounting bracket, which provides a variety of user options on various toolbars.  The 2967-038 can be mounted on a four-inch square, seven-inch square, five-by-seven-inch and four-by-six inch, among other toolbar configurations.This Titan’s floating design enables the residue manager wheels to run close to the surface of the soil and move the right amount of residue.  It can be locked down to enhance its performance in extreme conditions, and a depth-control adjustment option increases a producer’s control over a particular situation.According to the literature from Yetter, this system is especially advantageous in strip till operations, where the producer is trying to build an optimum planting environment for the next crop. Clearing the residue means there is less plugging around the knife and the sealing discs do a better job.
Yetter Manufacturers 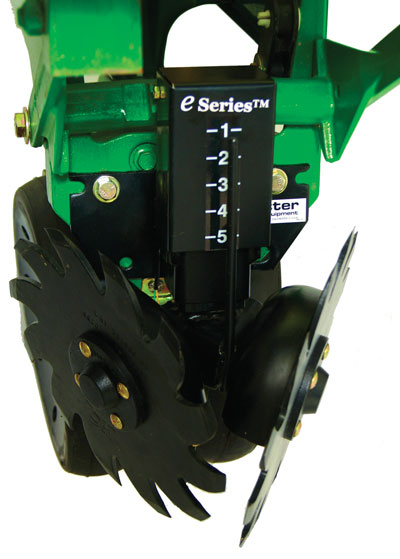 Making adjustments at the touch of a finger
Already a well-known name in residue management, Yetter Manufacturing now has a new system that enables a grower to adjust the 2967 e-Series On-The-Go Residue Manager with a simple touch of a button.  A touch-screen controller will now adjust the electric actuator to raise and lower each residue manager. It allows producers to fine-tune the depth of each tool while in motion.The touch screen offers growers several options for operation, either on one row, all rows or on a preset number of rows, which can be selected, and raised or lowered as needed.  Once the specific number of rows is selected, the touch screen will display a choice of adjustments, up or down. Several rows can be selected and adjusted all at the same time.

The touch screen mounts inside the tractor cab and offers more features and functions than previous models and uses a smaller control box.  Installation is made easy by using the tractor’s electrical system as its power source, and is designed to attach to the faceplate of the row unit and will fit most planter models.

The residue manager is said to speed adjustments and make the process faster and easier, saving the grower time and money, and improving return on investment.
Yetter Manufacturers 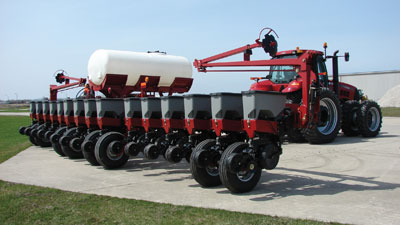 High-end precision flexibility
Growers who demand more flexibility and manoeuvrability during planting will be interested to learn that Case IH is expanding its line-up of Early Riser 1250 planters.  A new 12- and 16-row, front fold planter design is available in a variety of configurations.  It can be installed to provide the latest high-end precision farming features, as a basic version, or something in between.

The 1250 planter series is billed as ‘hard-working little brothers’ of the Case IH Early Riser 1250 24-row front-fold planter, introduced in 2007.  Like the 24-row unit, the new 12- and 16-row units are designed to provide an exceptionally narrow transport width of just 11 feet, 11 inches. The new units also boast great flexibility, with a wing flex of 21 degrees up and 21 degrees down, for excellent performance on hilly ground and areas that are heavily terraced They are equipped with the Case IH’s industry exclusive Early Riser row units, with superior seed-to-soil contact, to help with earlier, more even emergence.

Another industry exclusive from Case IH is the Early Riser’s Advanced Seed Metering system, with a highly advanced vacuum design with a larger diameter seed disk, providing unmatched accuracy over a wider range of seed sizes, regardless of seed type.  Large, small, flat or round, even at faster speeds.
All of this combines to offer higher yield potential.
Case IH 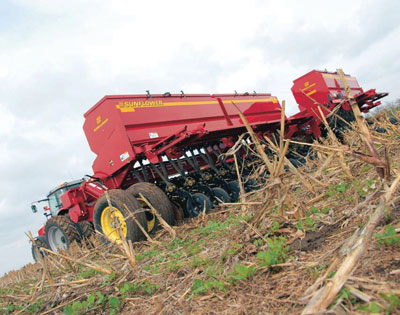 Greater capacity and versatility
As acreages continue to grow, producers are looking for more options with their grain drills, as well as greater efficiency.  And the new Sunflower 9530 fertilizer/grain drill from AGCO Corporation meets both of those needs. A proven, staggered grain box design and Heads Up Opener Assembly allows the 9530 to deliver exact placement of seed and fertilizer in any field conditions using conventional or no-till.

Strength is one of its assets, especially in non till situations, and the 9530 delivers, with 3/8-inch thick, 8 x 12 inch steel tubing for the main frame and the tongue.  A two-point hitch pivots vertically and horizontally for greater flexibility on rough terrain and with more carrying capacity.  The wing frames are built so that they provide a frame within a frame, to handle the extra weight and rotational forces that result from no-till applications.

Its stronger design also provides added elements of safety and convenience, from greater clearance in transit to drive shielding that flips up for easy fertilizer rate adjustments. Left and right wings pivot forward and up, and come with compound angled hinges, helping to reduce its width to 14 feet for easier transportation between fields.

In the field, the 9530 offers producers greater versatility, courtesy of a movable divider that keeps seed and fertilizer separate in a dual placement mode.  The hopper is designed for a 60-40 seed to fertilizer ratio, or 2.4 bushels and 120lbs of fertilizer per linear foot.  With the 30-foot 9530, the divided hoppers can hold 72 bushels of seed and 3600 pounds of fertilizer. In the 9530’s 40-foot model, there is a capacity of 96 bushels of seed and 4800 pounds of fertilizer.  Moving the divider creates a single chamber seed-only mode, with a 3.75 bushel per linear foot capacity.  In that mode, the 30-foot 9530 will hold 112.5 bushels of seed while the 40-foot model can hold 150 bushels.  All of this simplicity, flexibility and durability translates into improved productivity, including seeding 80 acres or more per fill, using the 40-foot 9530 with 7 ½-inch spacing.
AGCO Corporation 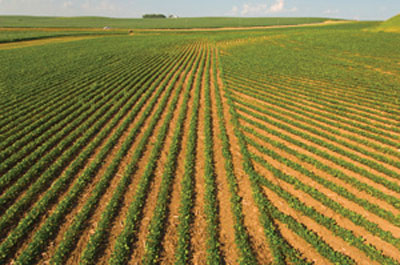 Building on the success of 1700 and DB series planters, the John Deere RowCommand is a planter row unit, on/off system to help growers reduce seed costs and eliminate the yield drag associated with double planting.

It should be available to growers for the spring planting season in 2009.

Billed as a simple and efficient solution to automatically control individual row units while planting on the go, the RowCommand unit controls seed output at the individual rows. That means an operator can reduce overplanting in point rows and maximize seed placement across the headlands.

The RowCommand system controls delivery seed by alternately engaging and disengaging individual clutches inside the Pro-Shaft (TM) drive gear box, where they are protected from both the field conditions and the weather elements.  When power is supplied manually or through the Swatch Control Pro (TM) a low voltage CAN messaging signal sends power to the appropriate clutches to disengage the seed meters and stop seed flow.  When the power is eliminated, planting is resumed.

John Deere’s Swatch Control Pro can also be used with the RowCommand system, which engages or disengages the clutches according to GPS coverage maps and field boundaries.  This allows the operator to focus on managing tractor and planter functions while the row units turn on and off automatically according to GPS data.
John Deere 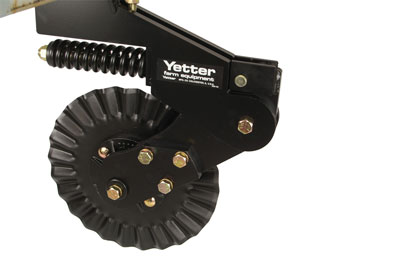 Smaller coulter makes big impression
Providing tools and technology to cut time and increase productivity, Yetter adds still another option to their list of residue managers.  The 2900-series ultra narrow-profile coulter is marketed as strong enough to handle the toughest residue conditions yet is engineered to operate at relatively high speeds, cutting down on a growers’ time in the field.

The 2900-series coulter comes in a wide range of blade options. Its smaller, compact design translates into easier installation in an area where larger and bulkier coulters are hard to fit, particularly in that tight spot at the front of the row unit. The 2900-series recess in to the planter frame, allowing the unit to fold up easily.

The new addition to Yetter’s line-up of coulters can slice through tough residue with a high-strength steel arm that fits tightly between a twin-arm mounting bracket.  The unique configuration of the mounting bracket uses stops to prevent the coulter from moving on the frame. This coulter also has a wide vertical range of adjustment.

The spring mechanism on the 2900-series coulter provides a momentary boost in down pressure, allowing the blade to cut through even the toughest residue conditions.  The spring maintains down pressure and cushions the assembly to prevent damage from rocks or other obstructions.

Versatile in its design and capacity, the 2900-series coulter can be mounted to align with the centre of the row unit or off to one or both sides of the row unit.
Yetter Manufacturers