Last April, Real Agriculture agronomist Peter Johnson tweeted a photo of winter wheat seedlings surrounded by a tangle of chickweed. “Chickweed in wheat needs to be controlled in fall! Shepherds purse, stinkweed same. Too much spring competition!” he wrote. 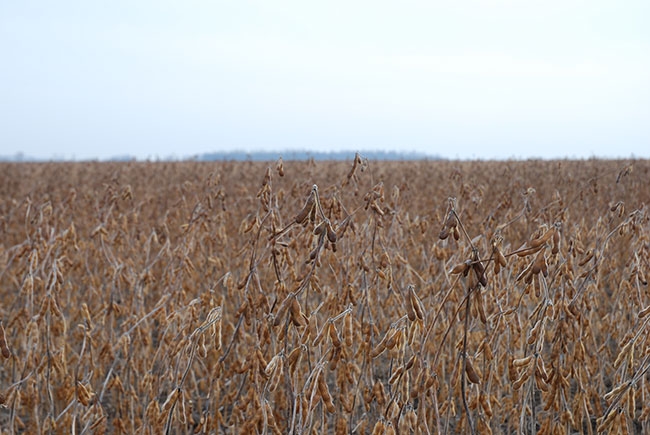 A soybean field before harvest. photo of winter wheat seedlings surrounded by a tangle of chickweed.

Annual weeds get most of the buzz when producers are talking about weed control, but winter annual and perennial weeds shouldn’t be underestimated, Johnson says.

“Producers worry about controlling spring annual weeds,” he says. “But when you look at perennial weeds or winter annual weeds, that’s where the really big yield losses hit in winter wheat.”

Weeds that are present in fields in the earliest days of spring, such as shepherd’s purse, chickweed, dandelion and fleabane, are the ones producers should be worrying about in wheat, he says.

“I probably had 20 calls this fall from producers that went into their corn fields thinking they had good weed control and found patches of perennial sow thistle,” he says. “It’s much more difficult to control in the spring than in the fall.”

Weed control is a long-term game, according to Johnson, and the best way to play it is to have a good handle on the weed spectrum in individual fields.

“On my own farm, the biggest weeds I fight with are dandelion and fleabane. Those have the biggest impact on my winter wheat crop,” he says. “For me, chickweed is rarely an issue but it could become an issue. It’s all of them, but it’s not all of them in every field.”

Know your weeds
Winter annual weeds germinate late in the year, when temperatures begin to cool and even after the first frost; they survive the winter and compete with winter wheat. Weeds in the mustard family, such as shepherd’s purse, stinkweed and volunteer canola, are examples of winter annual weeds. Agriculture and Agri-Food Canada (AAFC) recommends fall herbicide application from mid-October to freeze-up, and in the spring when application won’t harm crops.

Perennial weeds generally grow best during the warm growing season and thus are best controlled in the early fall just prior to harvest. A notable exception is dandelion, which grows best in cool fall conditions, meaning it should be controlled following harvest. Other examples of perennial weeds include foxtail barley, Canada thistle and quackgrass.

Mike Cowbrough, head of weed management (field crops) for the Ontario Ministry of Agriculture, Food and Rural Affairs (OMAFRA), says herbicides work differently depending on the time of year. In the fall, carbohydrates are translocated to the underground perennating plant structures and the herbicide moves downward with the carbohydrates, resulting in good control of perennial weeds. In contrast, in the spring, carbohydrates are mobilized from the underground plant structures and move upward; herbicides target new growth but fail to offer much root control.

“As a general rule, the species that benefit the most from fall management are perennial weeds,” he says. “There’s tonnes of data on dandelion that shows if you control them in the fall versus the spring, you get 20 per cent better control.”

When producers are unable to manage weeds like dandelion, field bindweed or Canada thistle in the fall, these weeds go green into the fall and come up green in the spring, and are harder to control in the spring.

Peter Sikkema, a professor in weed management for field crops at the University of Guelph’s Ridgetown campus, says dandelion is the most common perennial weed requiring fall control. “There have been a number of studies completed on dandelion control, and the majority of them indicate that you get better control with fall application than if you spray in the spring,” he says.

When it comes to winter annuals, Sikkema says that if producers have chickweed or glyphosate-resistant Canada fleabane in a field where they plan to plant winter wheat, a fall weed control program is a good idea. Herbicides can be applied either preplant or after winter wheat emergence in the fall. However, 2,4-D should not be applied after winter wheat emergence in the fall due to the risk of severe crop injury and yield loss, he says.

“If you’ve underseeded your wheat to red clover it is easier to control in the fall versus in the spring,” he says. “But in terms of fall weed management, it’s always going to be field and crop specific.”

“In terms of fall weed control, usually you’re looking at glyphosate application, but that doesn’t work for fleabane,” he explains. “So, you’re looking at tillage, which helps bury the seed and small seedlings.”

Canada fleabane seed has little to no dormancy, he says, which means it will germinate if it hits soil that is warm enough.

“With most weeds, maybe five per cent of the seed falls down and germinates in the first year, but the rest is dormant for a few years. That’s how these weeds become persistent,” he says. “But fleabane won’t germinate at depths greater than 0.5 inches.”

A second aspect of the study compares the effectiveness of tillage versus vertical tillage, a lower-impact form of tillage that breaks up some residue but doesn’t bury all of it.

Cowbrough says tillage is suitable for “worst-case scenarios” like some farmers’ fields where the researchers found four million fleabane seedlings per acre, but vertical tillage could actually make matters worse.

“Even if you take out 90 per cent of that population with vertical tillage, you’re left with a significant number of seedlings,” he says. “If we didn’t do further management to that site, the following spring the remaining plants actually grew bigger and more branched out than if we’d left it alone in the fall. If you’re going to use tillage to manage resistant species you need aggressive tillage. You don’t get 100 per cent control with less aggressive tillage.”

At sites with more reasonable population densities, perhaps tens of thousands of plants per acre, vertical tillage was much more effective, says Cowbrough.

But the first line of defense against aggressive weed species is herbicides – and the producer’s best chance of deploying these effectively is to know what they’re dealing with.