September 8, 2018
By Sponsored by NuFarm

If you have weeds in your field after harvest, think about a fall burndown,” says James Ferrier, Nufarm’s technical services manager for Eastern Canada. A fall burndown can be an effective tool to manage many tough perennial and winter annual weed problems and provide a cleaner seedbed for your next crop. 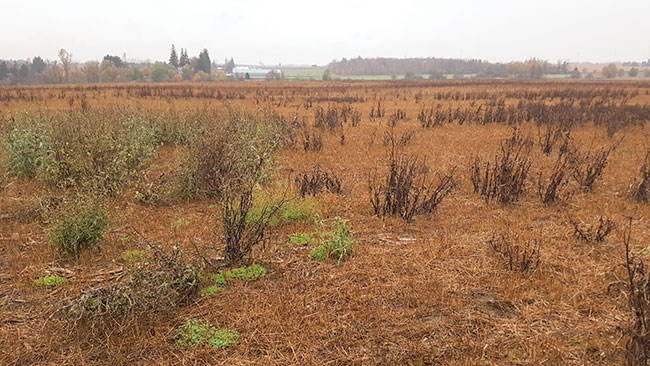 The sprayer miss with green plants (left) contrasts with the effective fall burndown on the rest of this wheat stubble field. If you have weeds in your field after harvest

Crucial control of perennial weeds
For many Ontario growers, fall is the ideal time to manage troublesome perennial weeds. “There are plenty of research trials across North America that show if you manage for dandelions, for example, in the fall you’ll get anywhere from 20 to 30 per cent better control than if you did the same tactic in the spring,” says Mike Cowbrough, provincial weed specialist with the Ontario Ministry of Agriculture, Food and Rural Affairs (OMAFRA).

“For instance, in Ontario it is pretty common if you are going to do a fall herbicide treatment to use glyphosate, and the rate most commonly used on dandelion is 1.34 litres/acre of a [glyphosate] product . . . You apply that in September, October or even into early November, depending on the weather, and you’ll get much better control than if you took that same rate of product and applied it on May 1, as an example.”

Ferrier explains, “In the late summer and early fall, perennial weeds with tap roots, such as dandelion and perennial sow-thistle, are sending photosynthates to their roots to enable them to overwinter. The herbicide can hitch a ride with those carbohydrates and other nutrients to effectively deliver that chemistry to the root and kill the root and the entire plant. So if we can apply a herbicide at that time, we are more likely to get control of those big tap-rooted perennial weeds.”

Cowbrough cautions that you shouldn’t expect to kill 100 per cent of the perennial weeds in your fields. “We’ve been trying to eradicate perennial weeds for a couple hundred years and that is not working out. But we do two important things with fall applications on perennials: We lower the weed’s population density, and we get dieback on the roots, so the shoots have to come from a little deeper in the soil and they emerge a little later in the spring than they normally would,” he says.

“You always want to put your crop in a position to win, and if you can get your crop emerging before any weed, that is a win. With weeds like perennial sow-thistle, field bindweed and Canada thistle, we can get them to emerge later through fall herbicide applications.”

Along with spraying while the weeds are still actively growing, Ferrier notes another important factor for application timing: “Depending on things like the weed species and stubble height, growers may need to let perennials regrow a bit after harvest so they have enough leaf tissue for spraying. Growers who leave a lot of stubble in the field may not have to wait at all. Growers who cut low and take a straw harvest may want to wait a few weeks and allow some regrowth of the perennials so there will be enough vegetation available for uptake of the chemistry.”

Stop winter annuals while they’re small
Fall can also be a good time to control winter annuals. “We’re finding that growers are seeing a lot more winter annual weeds, especially with no-till cereals, no-till soybeans and so on. These weeds emerge in the fall, overwinter and then bolt, flower, and set seed in the next year. If you can get good control of them in the fall while they are still small, with either a pre-plant or pre-emerge for cereals or a post-harvest burndown, you’ll have fewer weeds to deal with as a burndown or in-crop in your spring crop,” Ferrier says. “Controlling weeds like Canada fleabane, stinkweed and shepherd’s purse in the fall can save you time and money in the spring.”

Cowbrough adds, “Controlling winter annuals in the fall makes more sense than waiting until spring when they will be bigger and more difficult to control. And the window is probably nicer in the fall versus the spring.”

A complicating factor is that some weed species that grow as winter annuals can also grow as summer annuals. “[For those weeds,] controlling them in the fall doesn’t necessarily mean that you won’t have to control [the spring-germinating plants] in the spring,” Cowbrough says. “Chickweed, for example, will germinate all year round if the weather is good. But chickweed can be an alternative host for cutworm. So managing chickweed in the fall is probably good from the perspective of reducing the pressure of the alternative host.”

Post-harvest control before spring crops
“If you clean up the weeds in your field after harvest, you can start with a cleaner field in the spring,” Ferrier says.

“There is also plenty of opportunity for a fall herbicide after soybeans come off. After corn can be trickier. Depending on the weather, in some years you could be harvesting corn as late as early December to January [when weeds will typically be dormant]. But there are years where producers have been able to take off corn in November and then they get a day or two in early December that is above 5 C and gets up to 8 C or 9 C [so the weeds are actively growing], and they take advantage of that window. And in the spring, they are glad they did.”

The sprayer miss with green plants (left) contrasts with the effective fall burndown on the rest of this wheat stubble field.

Pre-planting/pre-emergent before winter wheat
Controlling perennials and winter annuals before winter wheat helps protect yields. Cowbrough says, “If yield losses due to weeds occur in winter wheat, then it is because the weeds were there prior to the crop’s emergence [because once winter wheat is up and growing, it is relatively competitive against weeds]. So a lot of producers are finding that fall pre-plant applications ahead of winter wheat are very beneficial.”

Ferrier is also seeing this increasing trend of a fall application before winter wheat. “Growers are so busy in the spring planting their corn and soybeans that often they don’t want to take the time to get effective weed control in their winter wheat crop. But if they can put down a good burndown pre-emergent on their wheat, such as Nufarm’s BlackHawk [pyraflufen-ethyl and 2,4-D ester] with glyphosate, they can often avoid having to do an in-crop application in the spring in their winter wheat. So it really helps them spread out their workload.”

For growers who are wondering about phenoxy products, like 2,4-D or MCPA, for pre-emergent applications on winter wheat, Ferrier explains, “Extensive work has been performed that shows the safety of products like BlackHawk or 2,4-D pre-emergent to winter wheat. As long as no plant tissue is poking up through the ground, these products can be applied.”

Herbicide resistance and fall burndowns
“Herbicide resistance is a big topic in our industry. We know that the more often we apply a mode of action, the more likely we are to see resistance to it. We also know that if we can apply multiple modes at different times of the year, we can delay the advent of that resistance,” Ferrier says. “If you have a product like BlackHawk, which contains two modes of action, Group 14 and Group 4, and you apply that [in a tank mix] with glyphosate, you are getting three modes of action, all working on the weeds at the same time. So we strongly suggest that would help delay or avoid development of herbicide resistance in a grower’s field.” For example, he says a fall application of BlackHawk with glyphosate can help manage glyphosate-resistant Canada fleabane, a major weed concern in Ontario.

Canada fleabane is another one of those tricky weeds that can grow as either a winter annual or spring annual. According to Cowbrough, the number of Canada fleabane seeds in the seed bank can sometimes be so high that, despite really good control of the winter annual plants with a fall herbicide, the flush of new seedlings in the spring can be so strong that you also need a spring herbicide application. Another complication is that, in some years, winter annual populations of Canada fleabane can suffer serious overwintering mortality. “So, fall management of Canada fleabane that is going to be winterkilled anyway would seem like a waste of time, but assuming the mortality is because of a harsh winter, how do we know when that is going to happen? We’re very poor at predicting that.”

Cowbrough says, “Dealing with Canada fleabane in the fall lowers your risk of having super-large plants at the time that you want to control them in the spring.” But he also reminds growers that including non-herbicide control measures in your overall weed control strategy is another important tactic for slowing the development of herbicide resistance. Current work by Cowbrough and University of Guelph researchers on glyphosate-resistant Canada fleabane has identified a non-herbicide option. He explains, “We’re finding that the addition of a cereal rye cover crop seeded in the fall at a low seeding rate of about 50 pounds per acre either reduces the Canada fleabane population in the spring or at least keeps it smaller and more susceptible to herbicides.”

Cowbrough highlights another resistant weed problem: waterhemp, a fairly new concern in Ontario. Waterhemp populations in the province have resistance to up to four different modes of action (Groups 2, 5, 9 and 14). This member of the pigweed family is an annual weed that has a very long germination window from May to September and can produce over a million seeds per plant. Cowbrough says, “You wouldn’t want this weed to produce seed into August or September for next season. So managing it in the fall makes sense.”

This fall, when you’re assessing the weed issues in your fields after harvest, think about tackling perennials and winter annuals with a fall burndown – before the weeds get bigger and tougher-to-control and before they start competing with your next crop for moisture, nutrients and light.