Research shows that fall 2,4-D is often the only weed control required, and spring applications have greater potential for crop damage.

Research shows that fall 2,4-D is often the only weed control required, and spring applications have greater potential for crop damage

Over the years, researchers and growers have found that an application of 2,4-D is the only herbicide application required for winter wheat. One question has always lingered though, and that is whether 2,4-D causes some crop tolerance problems. 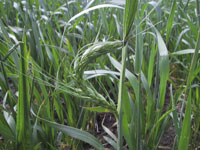 “That was a genuine concern back in the late 1980s, so Dr. Bob Blackshaw studied the issue and the results pretty much dispelled that notion,” says Brian Beres, a research agronomist with Agriculture and Agri-Food Canada at Lethbridge, Alberta.

“However, when we discuss weed control at winter wheat field days, we find that some growers are still leery about 2,4-D crop tolerance.”

To test the theory, Beres set up a trial for the Southern Applied Research Association’s Diagnostic Field School in the fall of 2006. He applied 2,4-D LV Ester to winter wheat in the fall at a rate of 560 grams active ingredient per hectare (1x), plus a two-time (2x) and four-time rate (4x). The three application rates were completed under the ideal scenario: on October 19 when winter annuals were present, under good growing conditions with temperatures of 15 degrees C and no frost. The same treatments were then completed under a high risk scenario: on October 22 following several nights of hard frosts and followed by frost.

“We wanted to really test the theory and see if we could create a wreck of widespread injury with excessive rates and poor timing,” says Beres. “None of the fall applications, even at four times the label rate following a frost, caused crop damage.”

Spring application, though, appears to be a different story. Phenoxy was applied in the spring at normal rates to winter wheat plots that were part of a demonstration on seeding rate and depth interactions. In those plots, he saw classic phenoxy crop injury of twisted and bent wheat heads.

Beres says the crop injury was likely caused by a frost following application and/or that the crop was already too advanced, and more prone to herbicide injury. He explains that cold temperatures can impair the crop’s ability to metabolize the active
ingredient, resulting in crop damage. 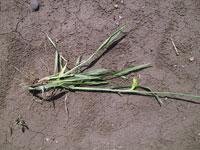 “The difficulty with spring herbicide applications for winter wheat is timing or applications preceded or followed by frost. Winter wheat can often advance more quickly than anticipated, and injury in spring is often the result of applying herbicides too late in the growth stage of the plant,” explains Beres. Part of the problem with crop injury relates to the formulation used. “It is important that producers only use 2,4-D and not a product that contains 2,4-D plus other herbicides such as Banvel.

Complaints of phenoxy injury in winter wheat are often attributed to the fact that multiple chemistries were used instead of just 2,4-D Ester.

“In my experience, winter annual weed control is much easier in the fall. The weeds are smaller and there is never an issue with the winter wheat growth stage in the fall. Frost is still an issue, obviously, but you have more latitude with it as you don’t have to worry about the crop stage once it reaches the two to three leaf stage,” explains Beres.

Weed control efficacy and crop yield
From 2002 through 2004, Beres, along with Blackshaw and Lacombe researchers George Clayton and Neil Harker, looked at an integrated approach to winter wheat production. They compared the effect of seeding rate and cultivar on stand establishment, weed competitiveness and yield. Part of the trial compared a fall 2,4-D application to a fall 2,4-D plus a spring in-crop tank-mix of Refine Extra and Horizon.

Results indicated that even though the spring in-crop herbicide significantly reduced spring weed populations, winter wheat yields were not significantly different when only a fall 2,4-D application was used. The study concluded that because fall winter annuals are the greatest threat to winter wheat, fall 2,4-D is usually the only herbicide application required, especially if a good plant stand is established. “If the weed spectrum you are going after is only winter annuals, then a fall 2,4-D is the only application you need to worry about,” says Beres.