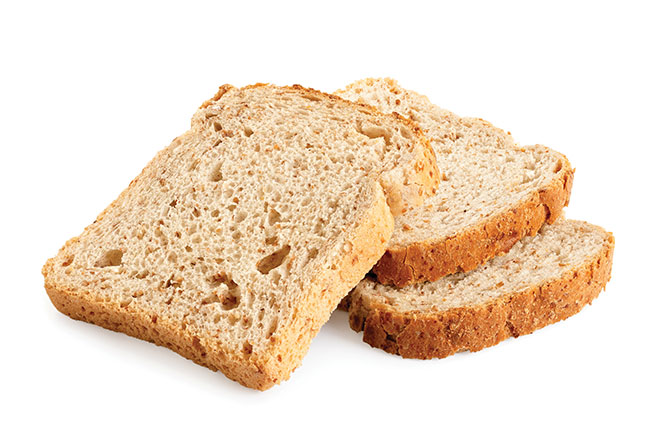 The 2019 harvest was one to forget for many Prairie farmers. Rain, snow and frost caused a reduction in grain quality, which affected wheat, flour and end product quality. In addition to frost, mildew and Fusarium damage, a quality factor unfamiliar to many farmers resulted in downgrading of durum and spring wheat.

“Falling Number (FN) provides an indication of the level of sprout damage in wheat. It is a way to measure the amount of sprouting that may not always be visible on the kernel,” says Natalie Middlestead, a technician in analytical services at the Canadian International Grain Institute, the technical division of Cereals Canada, located in Winnipeg.

Flour milled from wheat that is sprouted can have poor dough handling properties during the breadmaking process, reduced loaf volume and poor crumb structure and colour. Flour produced from wheat with high levels of sprout damage may also impact the colour and texture of Asian noodles.

An indication of sprout damage comes from the Falling Number test that indirectly measures alpha-amylase activity. Alpha-amylase is an enzyme that breaks down starch in wheat kernels into sugars.

A Falling Number test is done by grinding 300 grams of a representative wheat sample. A portion of the ground wheat (seven grams) is placed into a tube to which 25 millilitres of distilled water is added. The tube is mixed vigorously, placed in boiling water, and stirred for 60 seconds. A weighted stirrer is dropped through the ground wheat/slurry. The amount of time in seconds that it takes the stirrer to fall through the sample is the Falling Number. With no or low sprout damage (low alpha-amylase activity), there is less starch breakdown so the slurry will be thicker, resulting in a higher Falling Number.

Middlestead says that in the lab, a Falling Number greater than 250 seconds is considered sound and produces uniform bread that rises well and slices easily. A lower Falling Number, such as 62 seconds, will result in a loaf of bread that has poorer colour (darker) with poor crumb structure (the interior portion of the bread). 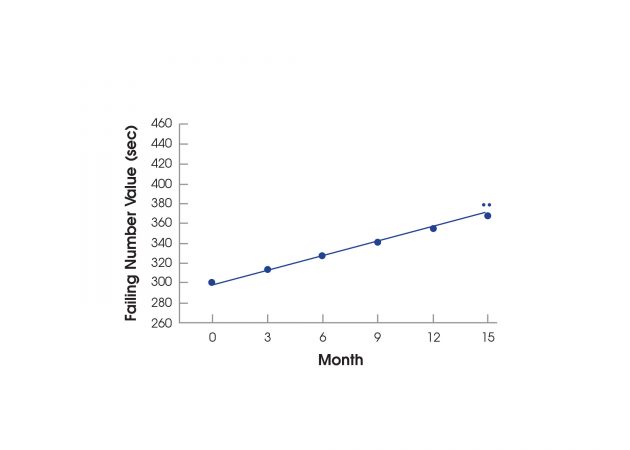 Wheat with a low FN produces bread with a gummier texture that doesn’t slice easily. But Falling Number can be too high as well.

With a Falling Number of 400 seconds, bread loaf volume is lower because there is not enough alpha-amylase activity to convert the starch into sugars to feed the yeast, which is necessary for bread with good loaf volume.

Sprout damage does not affect durum quality as seriously as it does for common wheat. Low Falling Numbers in durum wheat can lead to poorer pasta texture, and more starch may leach out of the pasta. Mildew damage is often associated with sprout damage and can cause dark specks in the semolina, which negatively impacts appearance in pasta.

For wheat classes that are used to produce flour for Asian noodles, sprouting can also lead to noodles with poorer texture when they are cooked, and they can be stickier because more starch leaches out of the noodle.

Falling Number can change over time, with the value rising with wheat under safe grain storage conditions. However, research has also found that wheat with a Falling Number lower than 150 seconds will not benefit from long-term storage.

An acceptable Falling Number can vary by country and grain buyer. Information from PerkinElmer indicates that, “in the EU, the limit for intervention of bread (common) wheat is a minimum Falling Number of 220 seconds. Segregation limits at 250, 300 and even 350 seconds are commonly used for example by exporting countries for wheat or durum wheat.”

The Canadian Grain Commission conducts a Harvest Sample Program, and provides an unofficial grade and protein as well as Falling Number and DON results for wheat.