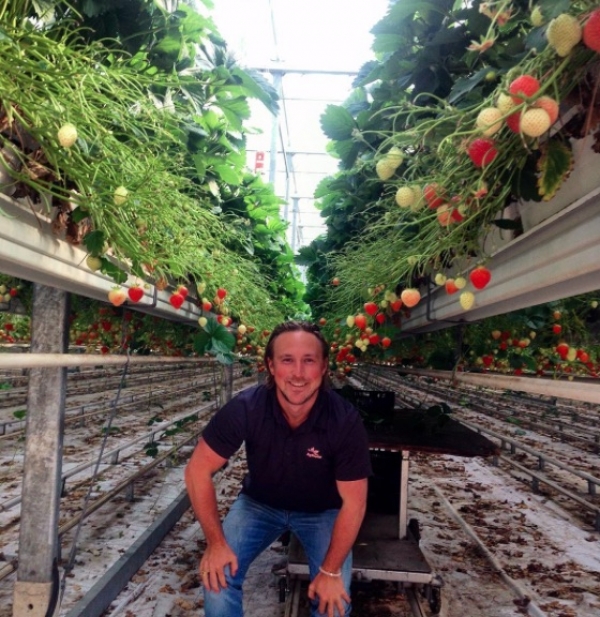 Zamecnik observing the growing process in the Netherlands Photo courtesy @dustyzam on Instagram
Expansion and innovation is what Dusty Zamecnik is focused on with EZ Grow Farms, even though he wasn’t originally planning to take it over.
Zamecnik , who was recently named director, is heading the strawberry propagation division of the fruit and vegetable farm, based in Langton, Ont. In addition to strawberries, the farm grows blueberries and hops on 230 acres. EZ Grow was one of the first farms to see the opportunity in blueberry production in southern Ontario, with the first blueberry bushes planted in 1970. EZ Grow is now one of the province’s largest highbush blueberry producers, growing 11 varieties.

Zamecnik’s great grandfather emigrated from Belgium and purchased a farm in 1935, which was primarily a tobacco operation. In 1975, Zamecnik’s grandfather, Ed, sold the original farm and purchased what is now known as EZ Grow Farms – an abbreviation of his name. Then Darryl, Zamecnik’s father, bought shares in the farm that took 15 years to pay off.

“In that time I felt that I had put in the majority of the effort for the farm to succeed, while being questioned about my decisions,” Darryl says. “I promised that I would not do this, this time around [with Dusty].”

“I know what I would ideally like to do if I could plan for my son, but is that what he wants? Our goals need to be in sync.”

Zamecnik, who is an only child, used to go along with his father to various meetings in Toronto, and eventually decided he wanted to be a fruit buyer at Loblaw; someone in the middle managing the farmer’s wants and needs with the company’s. But that never came to fruition – the company put the program on hold in Zamecnik’s senior year of high school.

Before going off to university, he was fed the typical line many farm kids hear: The farm will be here for you.

“But that’s a weird [concept] to think about because if you try something different and it doesn’t work out, then it’s: ‘I guess I’ll go back to the farm.’ I hate that [negative] connotation, because what [I’m] doing now, I can’t ever consider that a fall back,” Zamecnik says.

For the time being, the family still has active roles on the farm before the full succession plan rolls out. Darryl serves as president, Dusty’s mother, Helen, serves as the manager of the blueberry division, and Dusty’s uncle, Jarrod Zamecnik, is manager of crop inputs. A middle management layer of non-family members has also been fully embraced in the operation.

Excitement in the industry
“We’re really taking leaps and bounds in innovation and research with the strawberry plants. It’s something I never thought I’d be doing, [but] I like to trailblaze, set my own path and do it on my own scale,” Zamecnik says.

The propagation division, which Darryl started 19 years ago, is the newest division of the company and the one that Zamecnik oversees. Strawberries are bred and started in the nursery at EZ Grow, then shipped and sold to growers in Florida.

Inspired by trips down to Florida visiting his father’s customers, Zamecnik made the conscious decision to return to farming, quitting his job in sales with Labatt.

“[After] going to school, my time at big corporate and coming back [home], I sort of realized one of my abilities is to connect the right people and I thrive on that,” he says.

But for Zamecnik it wasn’t just about taking over and doing the same thing his parents did.

“How do I expand on it and be able to take it to the next level? I’m always the first to admit that I am nowhere near a good farmer or the best farmer. I’m sort of positioning myself more as a businessman and not just your typical farmer.”

Although in the past Zamecnik was looking to expand international sales, he’s now looking into expanding the greenhouse sales because that’s where he sees EZ Grow as a pioneer in the industry.

And being a pioneer means trying new things. A new style of greenhouse to the Canadian greenhouse scene, Cravo (built in Brantford, Ont.), is currently being built on the farm– and in an area where no one has done it before. EZ Grow has acquired the exclusive rights for North America to grow new varieties of strawberry plants.

“I still have internal struggles daily and I’m very open with my parents on that [aspect], and they’re open about their struggles and the dynamics that they’re dealing with, [but] we’re also very open about the opportunities.”

The state of succession
As director of EZ Grow Farms, Zamecnik now has signing authority on behalf of the company.

“Now that I have signing authority, I have the ability to take my own loans out. You kind of feel more connected,” Zamecnik says. “You’re not just an employee on the farm; I’m buying in, I have a financial obligation to run this company as clean and lean as possible. It [now] affects my bottom line.”

Although he doesn’t have shares in the company yet, that’s a part of the succession plan: Zamecnik will purchase his parents’ shares from them as part of their retirement plan in about 10 years. In order to build equity, Zamecnik has purchased his own farm, which the family was previously renting. He’s also registered his own HST number.

“I will be incorporating my own business, which will [eventually] be a division of EZ Grow. That’s sort of how we’re framing our succession planning – it’s that eventual buy out.”

Although the planning process went smoothly and there was no need for a mediator, the family did seek out some expert advice.

“What we did was speak with our lawyers and our accountant quite actively with the [succession] planning to make sure [we were doing] what’s best both financially and [in the long term].”

There aren’t any regrets for Zamecnik with the succession process, only wishing he had made up his mind a bit earlier. But he stresses that farm families should take all of the constant realities into consideration, including what happens if there’s a death in the family or how to deal with financial struggles.

“Ask the questions that maybe you don’t want to ask or that might be straining,” he says.

“Succession plans change too and that’s the beauty of it. It’s not set in stone. As long as you have a system in place, you never know what tomorrow can bring – we’re just extremely open to that.”