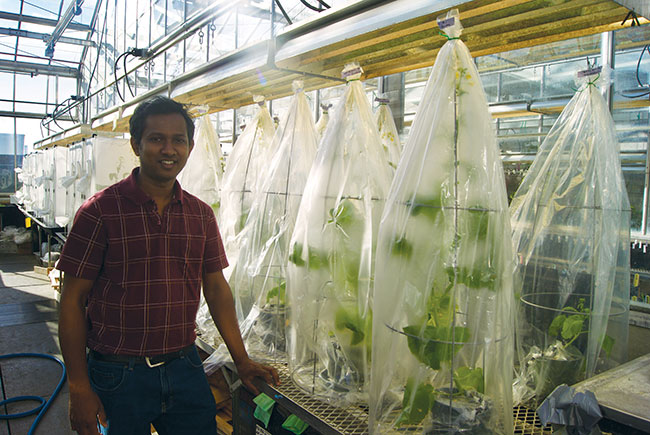 As part of his research, Chaminda Weeraddana analyzed the volatile organic compounds between clubroot-inoculated susceptible and resistant cultivars to study their effect on bertha armyworm. Photo courtesy of Chaminda Weeraddana.

Bertha armyworm is a cyclical, generalist insect pest that has adapted to using canola as its preferential host crop. Diamondback moth is a specialist on brassicaceous plants such as canola and can undergo multiple generations depending on when they arrive on the southerly winds that carry them to the Prairies. Clubroot, another specialist, is a devastating root disease of canola when susceptible varieties are grown and is increasing its spread across the Prairie Provinces. Individually, these pests can take a serious toll on a canola crop if not managed properly, but what happens when they act on canola together?

Chaminda Weeraddana, a former PhD student at the University of Alberta in the department of biological sciences and currently working as a post-doctoral fellow in the department of entomology at the University of Manitoba, now has the answers. As part of his PhD thesis, Weeraddana studied how the generalist bertha armyworm (BAW) is impacted by a canola host crop that has already been affected by the specialists diamondback moth (DBM) or clubroot (CR).

“A canola crop is impacted by more than one stressor at a time under field conditions. However, most of the research has focused on testing the direct influence of only one stressor, but this is not realistic under field conditions. We need to understand multiple interactions in order to understand the ecology of BAW in canola fields. Then we can incorporate these findings into integrated pest management of BAW in canola. Because of the overlapping life cycles of BAW, DBM and clubroot in canola on the Prairies, I thought it would be important to study their interactions,” Weeraddana explains.

Egg-laying by bertha armyworm was affected by clubroot but not by diamondback moth
Female BAW moths were able to distinguish between CR-infected canola and uninfected susceptible canola, possibly from the volatile organic compounds (VOCs) emitted by canola under attack by the pathogen. As a result, the female moths laid fewer eggs on the CR-infected susceptible canola cultivar. Clubroot-infected plants are also smaller with fewer leaves which could be less attractive to a female moth who lays her eggs mostly on the underside of leaves. In addition, clubroot-infected plants exhibit reduced overall fitness due to galls impeding water and nutrient uptake, perhaps making them less desirable as a host plant. On the resistant canola variety, there was no difference in egg-laying on the pathogen-inoculated and mock-inoculated canola.

Weeraddana also inoculated the susceptible canola variety with a low dose of inoculum to see the effect of a mild clubroot infection on egg-laying. The result was a trend toward BAW moths laying fewer eggs on these plants. “Because the plant morphology (leaf differences, etc.) from this mild infection was not severely affected, it is possible that the female BAW moths were still able to detect volatile cues from the plant since reduced egg-laying was consistently observed, but it was a non-statistical trend,” he says.
Contrary to the clubroot experiment results, female BAW moths did not have an egg-laying preference between the DBM-damaged canola or the undamaged canola. “DBM has a short life cycle and completes several generations per field season in the Prairies. Although earlier DBM generations occur prior to BAW infestations, later in the season, feeding activity of both species co-occurs in canola fields. In my experiments, I introduced BAW a short time after feeding by DBM, which is similar to the field conditions. However, this short time may not have allowed the plant to mount defences against oviposition by BAW,” Weeraddana explains 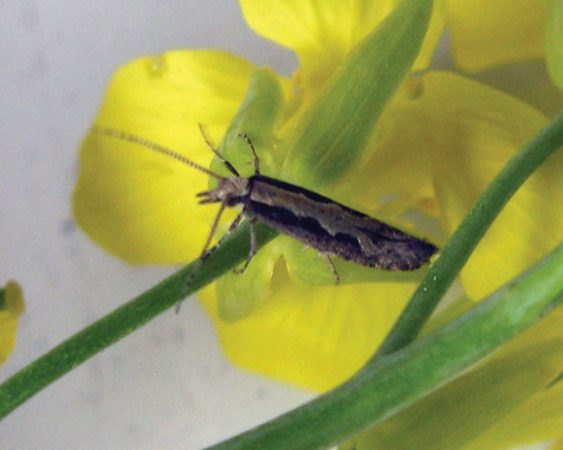 Bertha armyworm development was suppressed by diamondback moth and clubroot
Bertha armyworm larvae grown from eggs laid on clubroot-infected susceptible canola developed into smaller pupae and then into adults with smaller wings. The same result held true for BAW larvae that fed on DBM-damaged canola. Small wings tend to equate to lower reproductive capabilities as well as reduced dispersal by the moth. Pupal weight and adult wing size of BAW were not impacted by the clubroot-inoculated resistant variety.

Plant hormone changes due to clubroot infection may influence egg-laying
The presence of the clubroot pathogen had an influence on plant hormone levels particularly in the susceptible cultivar. Salicylic acid and its conjugates were much higher in CR-infected canola at the pre-flower stage (five weeks old; usually at seven to eight weeks, canola starts flowering in greenhouse conditions), and this observation was even more pronounced in the susceptible variety. This is the first study to report an increase of salicylic acid in susceptible canola following clubroot infection. “In our study, female BAW laid fewer eggs on CR-inoculated susceptible plants that had higher levels of salicylic acid and its conjugates in the pre-flower growth stage, suggesting that salicylic acid may accumulate in the plant and negatively influence egg-laying by BAW,” Weeraddana says.

Weeraddana’s findings help form a strong knowledge base that is key to understanding how BAW performs when its canola host has already been affected by another insect or disease. Ultimately, more research involving the interactions between different pest species will contribute to more effective integrated pest management approaches to help western Canadian farmers manage common insects and diseases in their crops.