Group 4 herbicides, synthetic auxins, were used on an estimated 366 million hectares globally in 2014. The top three modes of action are Group 9, glyphosate, at 508 million acres, then Group 2, ALS inhibitors at 477 million hectares, and then Group 4. We know that Group 9 and Group 2 have a lot of selection pressure for resistance, but what about the Group 4? 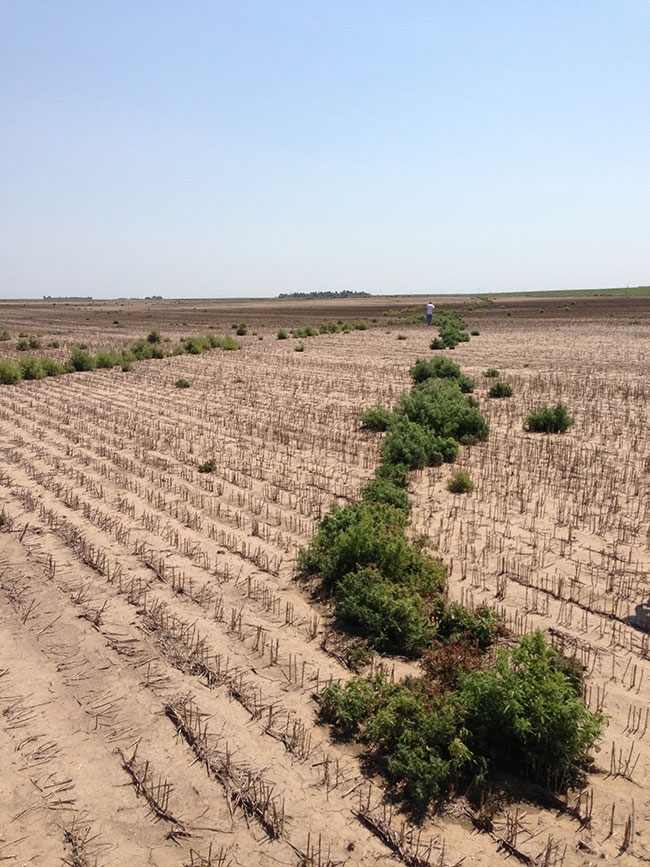 Fifteen to 20 per cent of kochia in Colorado is resistant to both glyphosate and dicamba. Group 4 herbicides

Group 4 is also a mode of action in which there’s still active discovery going on for new active ingredients. Within the last several years, aminocyclopyrachlor was introduced, and even more recently, halauxifen-methyl.

It is often stated that the Group 4 synthetic auxin herbicides, have a lower incident of resistance than other herbicide modes of action. Within the first 35 years of use, there were only a couple of species reported resistant, and two of those were reported in the ‘50s.  It’s certainly safe to say that the rate of occurrence of resistance to Group 4 was slower, and a lot of these species, while resistant, didn’t necessarily have major impact on the choices that managers had to make. However, in the last few years, and perhaps over the coming years, there may be some different trends as the herbicides in this group will be getting more use.

Kochia is one of the most significant Group 4-resistant weeds, with a number of populations reported in Canada as well across the US. In Canada, there are other species that have been reported. These include spotted knapweed, hempnettle, false cleavers, and wild mustard. The very first 2,4-D resistant species reported was wild carrot in Ontario. Another species in the U.S. that is definitely of importance is waterhemp, Amaranthus tuberculatus. There are now at least two populations reported as resistant to 2,4-D. Also in the U.S., particularly in the Pacific Northwest – Oregon, Washington, Idaho area – prickly lettuce resistance to 2,4-D has been confirmed.

In Australia, wild radish has some populations resistant to 2,4-D, and that certainly has some economic impact. In Europe in cereal production, there is corn poppy resistance to 2,4-D. Recently in South America and Argentina, smooth pigweed has been reported as resistant to both 2,4-D and dicamba.

Mechanism of resistance
Plants can be resistant in three different ways.  One is through the target site. There are proteins where these synthetic auxins bind and have their signalling effect. These auxin receptor proteins are called TIR1 or AFB, and another group of auxin co-receptor proteins are called Aux/IAA. When you apply a synthetic auxin herbicide, it brings the TIR1 or AFB protein to the AUX/IAA and takes it away to be destroyed. That allows genes to be activated, and it turns on all kinds of plant growth pathways. The plant cells lose their regulation of growth – that is division, expansion. You get all the symptoms you’re familiar with from synthetic auxins – epinasty, leaf curling, leaf cupping – that eventually starts to lead to cell death, and ultimately the plant dies. When resistance develops, mutations in these target site proteins interrupt this process.

What’s important to know is that both dicamba and 2,4-D are structurally similar to the auxin hormone, indoleacetic acid (IAA) in plants. This seems to be what allows these herbicides to signal through that two-protein sandwich at the target site.

A second way resistance may develop is through a transport system at the cell level where the synthetic auxin may not enter the cell, or it may leave the cell at a different rate.

A final mechanism is metabolic. For example, the new crops with auxin resistance traits, Roundup Ready Xtend (dicamba) and Enlist (2,4-D) have a gene that rapidly metabolizes dicamba or 2,4-D, respectively. We know this is a way that plants can become highly resistant to the auxin herbicides.

Until the last several years, the mechanisms of resistance weren’t really known in Group 4 herbicides. Some work was done in Canada on wild mustard to help understand the physiology, but it hadn’t quite gotten to the level of a specific gene. Recently at the Australian Herbicide Resistance Initiative, some work from Danica Goggin and her group showed reduced 2,4-D translocation in wild radish. Of those three basic types of mechanisms– translocation, metabolism, or target site – it suggests translocation may be the reason for resistance there.

Fifteen to 20 per cent of kochia in Colorado is resistant to both glyphosate and dicamba.

Kochia resistance
Dicamba was first introduced in 1967, and resistance was first reported in kochia around 1990. It’s interesting that through the mid-’90s, various sites would report lack of kochia control with dicamba. Then, it would be investigated, could often be confirmed, but then, over subsequent years, it really wouldn’t be a problem in that field anymore. So, kochia seemed to have this pattern of appearing and going away, which is obviously different than the patterns for resistance to ALS inhibitors where resistance was discovered and became widespread fairly quickly.

The situation, at least in Colorado and a good part of the Southern Great Plains, is that glyphosate resistance has become fairly common in kochia. The tank mix that’s common for fallow is glyphosate plus dicamba. Fluroxypyr is getting used more where glyphosate and dicamba resistance are becoming common. We haven’t yet found fluroxypyr-resistant kochia populations in Colorado. This becomes really important because we have a set of populations, 15-20 per cent, that are resistant to both glyphosate and dicamba. Certainly there are some clear management challenges once you start getting multiple resistance stacked in populations.

Over the years, kochia resistance has been shown that it’s a single gene, dominant inheritance. An interesting thing about kochia and dicamba is that typically we see that dicamba-resistant kochia can be controlled by the label rate for a pre-emergence application. But what’s important to know is that dicamba has some residual activity that is decreases as the product breaks down in the soil. The concentration at which the resistant kochia can grow is going to occur earlier than for susceptible. Practically speaking, you won’t have as long a residual time using dicamba pre-emergence for control of kochia if you have a resistant population.

One of the things that happens when you treat plants with a synthetic auxin herbicide is the plant makes a gas called ethylene. We found that the gene that leads to ethylene production is turned on in susceptible kochia after treatment but it is not turned on in resistant kochia. There’s also another gene that’s known to be activated by synthetic auxin treatment. In the susceptible kochia it is activated but not activated very much in resistant kochia. This suggests that the dicamba goes into the resistant plant, and it’s not having the signalling effect that it normally would. We also tested metabolism, and we found that it wasn’t metabolism. This is a target-site mutation and is pretty exciting to share.

Sherry LeClere with Monsanto looked at the target-site mutation. In the Aux/IAA protein, there’s a conserved part of these proteins that has a certain amino acid signal. The alignment of the receptor and co-receptor proteins is critical in order for the auxin to have the signalling and to take this protein away and have it destroyed. In the susceptible kochia, it’s a “G” amino acid as it normally would be, but in the resistant kochia, there’s a mutation, and now it’s an “N” amino acid. This mean that the auxin no longer binds.

Researchers also looked at a “yeast 2-hybrid assay.” What they found is that the two proteins AFB and Aux/IAA, are interacting in the presence of dicamba. When there is a resistant mutation, they don’t interact, and the dicamba doesn’t turn on all the growth pathways, and this is why they’re resistant. This is fantastic scientific work and something that we didn’t know before.

To summarize what we know about dicamba resistance in kochia: we know that they are resistant to both pre- and post-emergent applications, but the high end of the label rate of pre-emergent does control resistant kochia. Keep in mind that you’re going to most likely have less residual, and you’ll be still applying selection pressure for potentially an even higher level of resistance. Growers need to think about other modes of action that could be effective pre-emergence on kochia to use as part of that system.

What’s been found so far is that target-site mutation in this Aux/IAA gene prevents dicamba from binding. It also appears that this mutation has a fitness cost. That makes sense because this pathway is so important for plant growth. If you mess with it, there’s going to be a trade-off.  It appears that when kochia has this mutation, it is going to grow slower, and make fewer seeds. In the absence of dicamba, they’ll be out-competed by a susceptible genotype. The implication is that you could potentially have the resistance trait drop in frequency if you were to stop using dicamba. We also suspect that there are at least two different mechanisms for dicamba resistance. In Colorado, in our surveys over years, roughly 30 per cent of our populations now in our no-till system are dicamba-resistant.

Group 4 resistant waterhemp
The other example of Group 4 resistance that I will mention is waterhemp, Amaranthus tuberculatus. From what I understand, this is something you’re keeping your eye out for in Canada to make sure it’s not introduced. We currently have two populations in the U.S. with reported resistance to 2,4-D. Marcelo Figueiredo, a PhD student from Brazil, has been working on a population from Nebraska and is looking at metabolism. A lot of herbicides are normally selective in crops due to metabolism – that is, the crop breaks it down. Some insecticides, such as malathion, can inhibit that, but if you co-apply certain herbicides and certain insecticides, you can get some crop injury. Malathion, in particular, we know inhibits a type of protein called cytochrome P450, an enzyme that does this metabolism in some plants. We looked at 2,4-D dose response on susceptible and Group 4 resistant waterhemp in the absence or presence of malathion. We found than when malathion was added to 2,4-D, the resistant waterhemp was controlled fairly similarly compared to the susceptible response.

To summarize the message around synthetic auxin resistance, dicamba resistance in kochia is a fairly big issue.  For the target-site mutation, we see a fitness cost. In waterhemp, we see enhanced 2,4-D metabolism, and we don’t know yet whether there’s a fitness cost there or not. Both 2,4-D and dicamba are expected to be used more in the U.S., Canada, and soon in South America with Roundup Ready Xtend and Enlist. These are very important herbicides in many crops so it is very important to be thinking about resistance management. They’ve been around for 60-plus years, and we want to keep them working.

The North American Kochia Action Committee was formed last year where university, government, and industry scientists from the U.S. and Canada are working together. The goal is to co-ordinate our strategies for what we’re doing on herbicide-resistant kochia research, including thinking about funding. We anticipate that this will facilitate collaborations among industry, government, and university around communication and extension as well as research.  We hope to develop very effective stewardship guidelines, bulletins, and best management practices so that everyone thinks about integrated management for kochia and how to sustain the management tools that we have.